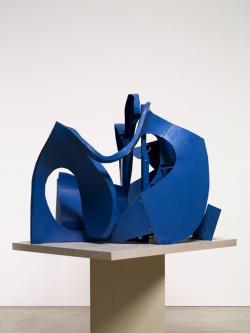 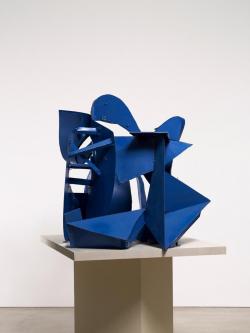 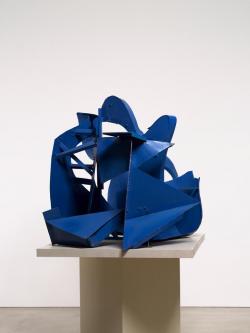 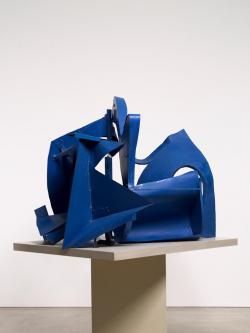 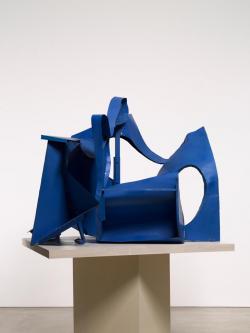 117.5 x 156 x 133 cm
Thomas Kiesewetter makes elegant abstract sculptures in which an industrial material, sheet metal, is playfully bent, folded and imbued with organic, almost human characteristics. Bolted together and painted in bold colours, his sculptures are reminiscent of modernist architectural shapes, as much as they make us conscious of the solidity of their single material. These angular works, unified by their material and their colour, look as if they have been frozen in action, caught mid-stride in their slightly neurotic articulation. 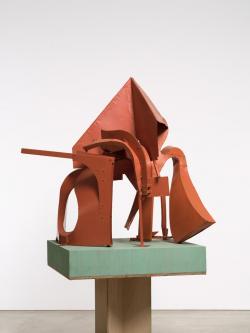 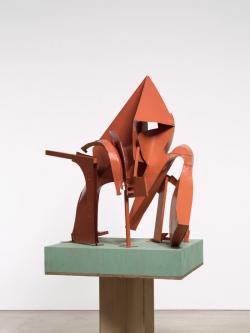 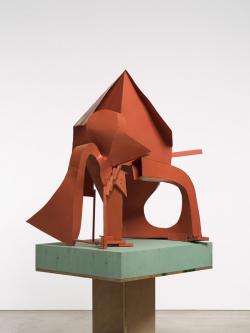 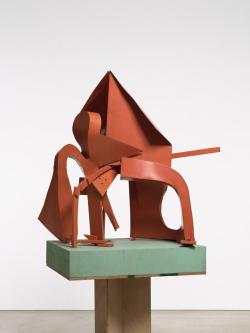 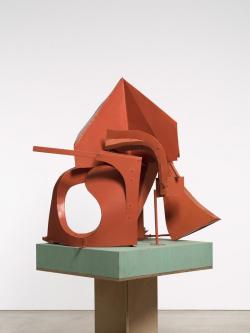 ‘What strikes me with metal as a material is its resistance. Metal seems to me like a stubborn interlocutor and the attempt to change it by pushing and bending involves a certain energy and power. The material demands patience, as it needs to be persuaded into acquiescence while it rigidly proclaims itself as unalterable. When the metal is bent physically, the energy of bending remains apparent.’

Matisse Blau and Barriere (both 2010) rest on plinths and are far sturdier than the more precarious shapes of his previous works. ‘The earlier sculptures such as Untitled (2004) are static and resemble figures. There is a constant notion of a singular unity that continues throughout the working process.’ 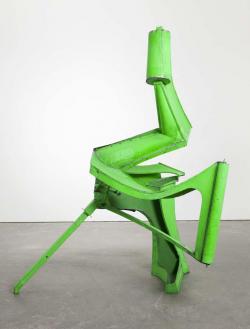 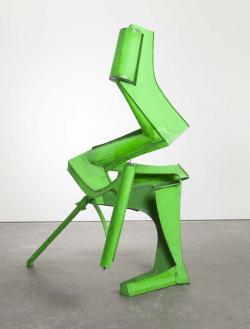 215 x 142 x 160 cm
The newer works push the material and formal qualities of metal further, collapsing what look like architectonic quotations and modernist atelier icons, and at the same time ironically redefining the connotations of his material ŌĆō from rigid hardness, strength and industrial alienation, to something more pliable, harmless and life-like. Matisse Blau and Barriere have more of a flow and momentum. In these sculptures I tried to capture something of the lightness of Henri Matisse’s paper cut-outs against the heaviness of the metal.ŌĆÖ


THE INVISIBILITY OF THE KIWI: OBSERVATIONS ABOUT THOMAS KIESEWETTERŌĆÖS SCULPTURES, ESSAY BY FRIEDRICH MESCHEDE


Blech: In English, an expression of disgust; in German, a term for high-gauge sheet metal. On view recently in his first solo show in the United States, Thomas Kiesewetter's untitled blech sculptures are all the more appealing for the baseness of their material. Formed from what look like found fragments of discarded machinery--chutes, tubes, quadrilateral panels--they come across as both high-rise urban and barnyard rural. Each is painted carelessly in a single color: dirty white, faded lavender, safety orange. Attached to rude wooden plinths, these screwed-together constructions are at once tabletop sculptures and large freestanding pieces. With their shifting sense of scale, it's almost as if they're representing silos, smokestacks, and weathervanes with parts from the real thing. Though abstract, they feel decidedly like models: One almost but not quite recognizes the low, curved entrance to a parking garage; the long arm of a grain chute; the curving facade of a theater.

The sculptures also look uncannily like drawings suspended in space. From a few steps away, their scuffed metal edges resemble scribbled graphite lines and their smeared matte surfaces unevenly tinted vellum. More important, they have the rightness of a successful sketch (much more so, in fact, than the actual sketches also on view here). Kiesewetter's sculptures were included in the "Artists Imagine Architecture" exhibition at the Institute of Contemporary Art, Boston, in 2002, whose curators linked them to the innumerable building projects of the artist's native Berlin. But while some new sections of the German capital--the crush of corporate megaliths and luxury residences in and around Potsdamer Platz, for example--are slick and giant scale, Kiesewetter's work is specifically oriented toward the human. It is unmistakably personal, even joyous, reveling in an industrial form untethered from real-world demands of buildability and use-value.

Though Kiesewetter's constructions bear comparison to artists as varied as Anthony Caro, fellow young Germans Thomas Scheibitz and Manfred Pernice, and even H.C. Westermann, their true ancestor is Vladimir Tatlin, whose 1919-20 Monument to the Third International was the apogee of Constructivist sculpture and the quintessential symbol of utopian aspiration expressed through architecture. Kiesewetter's carefully considered surfaces and industrial materials and the honesty and plainness of his constructions reflect Constructivism's faktura, tektonika, and konstruktsiya (from a historical position beyond "bad" painting and sculpture). More specifically, just as Tatlin's project was a reaction against Lenin's agitprop Plan for Monumental Propaganda, Kiesewetter's contrary, utopian constructions take as their framing principle the (re)building under way in Berlin, which carries similarly weighty ideological baggage. As Tatlin did in his revolutionary age, Kiesewetter humanizes the industrial while maintaining emphasis on the very nature of industry, and offers in the process a convincing and updated model of the possibilities for a twenty-first-century urban humanity under construction.