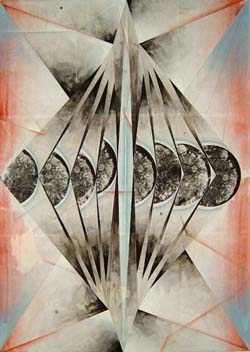 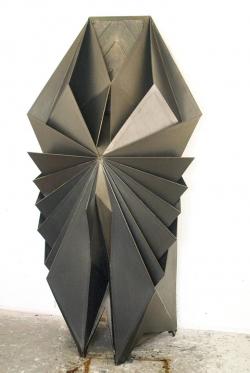 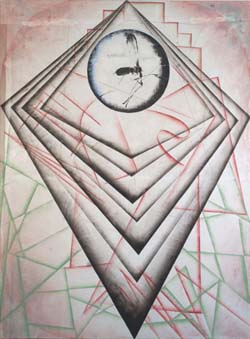 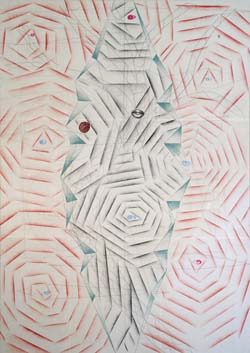 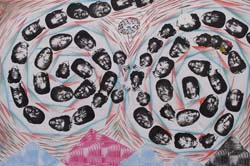 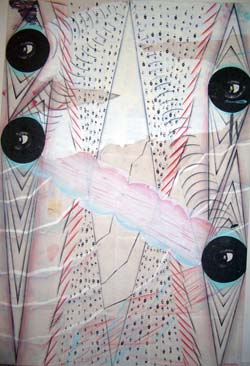 Tillman Kaiser
Don't Know If I Look Up or Down

Tempera and silkscreen on canvas 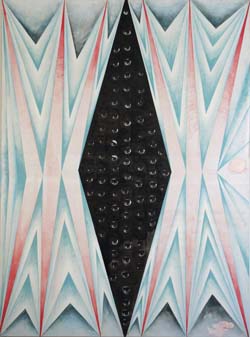 Tempera and silkscreen on canvas 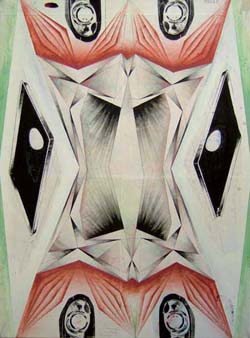 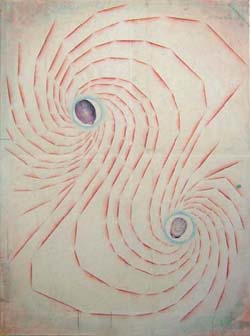 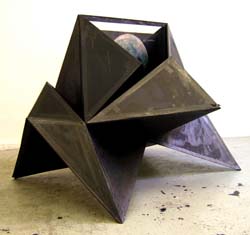 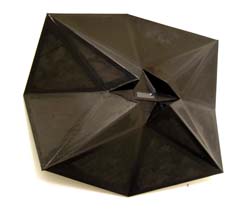 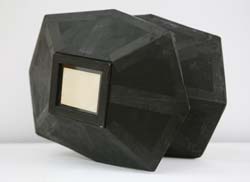 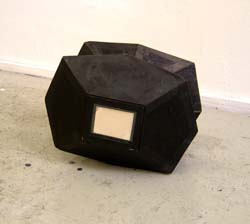 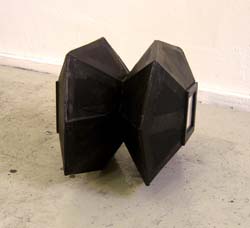 THE VIENNA MINUTE
by Abraham Orden

What's afoot in Vienna lately? Of the half-dozen or so international contemporary art stars associated with the city, only Herbert Brandl has opened a solo exhibition at home this season. It is at the gallery of his long-time dealer Rosemarie SchwartzwĂ¤lder, the Galerie NĂ¤chst St. Stephan.

Brandl came of age as a painter in the heady 1980s, and most observers categorized his thick, aggressively handled landscapes as Neo-Expressionist. Like his colleague Georg Baselitz, Brandl has since become an institution unto himself (at 48, he represented Austria in this year's Venice Biennale) and his work begins to draw its own associations with history.

Specifically, in the case of his current show, with J.M.W. Turner's paintings from the 1810s, when he was launching his pictorial revolution, and with Claude Monet's work from around 1920, when he was in the final phase of his.

The first of the three gallery spaces given over to Brandl's work here contains a single giant canvas, roughly 10 x 20 feet, quickly worked over by an extremely wide brush in a bright, thinly applied pthalo blue, with plenty of white ground left exposed. Precious few strokes of a deep, cold grey accent this seemingly chaotic field of brush-scribbles. One long diagonal brushmark passes across.

Like Turner, Brandl blends a taste for nature's most dramatic visual effects with a talent for submerging his imagery just below the threshold of representation, making pictures that are always becoming, rather than being. What at first looks like an arbitrary field of artfully invented marks resolves itself upon further looking into a realistic portrayal. The large untitled painting in the first gallery, which dates from 2007 and is priced at â‚¬100,000, depicts a flower upon a branch at close range, with a background of rushing water.s the middle, near to a single large dab of golden yellow, the only non-blue in the show's seven works.

It turns out to be a precise rendering, and once the eye catches hold of the image, the entire picture is in service to it. All the explosive splatters and running, chaotic paint, which seemed a mere record of action and chance, prove crucial to the depiction. They fill with specific meaning and are revealed to be necessary, even inevitable.

Nearby, at Layr Wuestenhagen Contemporary, a more inhuman vision of contemporary reality is to be found in the nightmarish figurative paintings of young Viennese native Svenja Deininger (b. 1974), who now calls Cologne home. A former student of painter Albert Oehlen, Deininger conveys in his work an image of a cybernetically distorted life lead inside a dystopic, frozen-hearted collective.

Roll back the clock about a century, and try to put yourself in the shoes of an art lover from that time - be it a well-heeled Parisian bourgeoisie or a proletarian Sunday painter - and think about how Modernism's first volleys of abstraction must have looked to those fresh eyes. The historical record is filled with the hysterical screeds and screams of critics ('My eyes did bleed!'; 'The end is nigh!'), but there is little of the viewers who - like us - were open to the whims of creativity. No matter what sort of preparation or level of taste, their first reactions of 'huh?' before their subsequent acceptance or rejection must have been delightful to witness. Tillman Kaiser's show has that 'eve of Modernism' feel to it, with humble materials forged into a dorky sophistication that has the naivetĂ© of optimism, or at the very least risks being thought of as uncool.

The sculptures in this show build upon this vocabulary of modernity with angular forms and a limited black or white palette. Coat (2007) has black wings like a stealth bomber, trailing behind a metal box - encrusted with a mysterious patina - that appears less found than unearthed. Pointing skywards, it comes across like a tiny war machine with an old surplus cockpit out front, the mix of which is successful. In What Goes Around Comes Around (2008), black squat diamond shapes stand tall, all connected in the centre. With glass eyes affixed on each corner of these upright argyles, it could pass for a large Masonic compass or fancy drill bit. This (2008) looks like a 23rd-century tricycle made up of solid kite-shaped forms. The sleek structure is covered in a flat white paint that belies its plain cardboard underpinnings, and reeks of movement and purpose.

The paintings also do their job with an economy of colour and form, pared down to quirky lines of shading in light red or a turquoise green spread over these eggshell-coloured canvases done in egg tempera. In Tapeworm (2008), some silk-screened black elements are added to the mix, daisy chains of printed eyes meandering through a field of neatly detonating fireworks. Interlude (2008) has red lines radiating upward like spotlights at a Hollywood premiere, against a verdant corduroy sky, the two colours broken up by more silk-screened discs that look like phases of a bunch of broken moons. The paintings also have occasional words scribbled in pencil (for example, 'never tell you' or 'sleep archive') that lead us nowhere in particular, but reward viewers who bother to take a closer look. Butter My Heart (2008) is an odd painting covered in homely outlines of wonky diamonds. Collaged on the right side is a small image of an explosion with the typewritten words 'BUTTER MY HEART' running across it. While it did not make any more sense of the painting, I felt that lovely sensation of not knowing what was going on - and gladly not caring. Kaiser has said that he wants his art to be like 'a very nice drug' (a high bar for any art), so that, 'once consumed, the viewer feels amazing yet strange at the same time.' While the contact high from these paintings wasn't debilitating, there was definitely something in them that gave off a fine buzz.

Many of the works that fueled the beginnings of modern art were filled with non-objective moves: lines that spoke to the future; vectors of possibilities and promise. No matter where they were pointing it was always to a better tomorrow. Rather than a rehash of these century-old moves, Kaiser's works have a hopeful charm that still speaks to us now. In the spirit of 'anything is possible', even simple cardboard and paint can be thrown together to create objects that will possibly roam our futures, and hopefully the drugs as well as the art will be very nice.