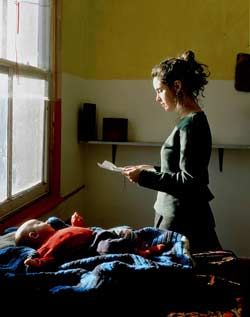 Cibachrome print mounted on board

Hunter photographs the people and places of his immediate community. Woman Reading Possession Order, is part of a series of work he made of a group of squatters living in Hackney. In this photo, Hunter borrows his composition and colours from Vermeer’s A Girl Reading At An Open Window. Like Vermeer, Hunter portrays quiet, everyday scenes which give his ‘outsider’ subjects a visible presence and quiet nobility. 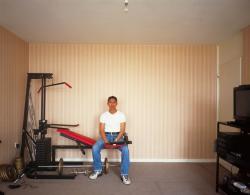 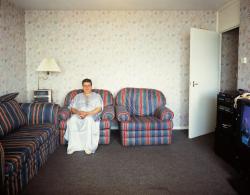 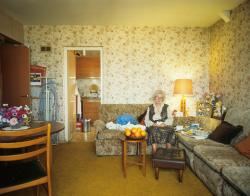 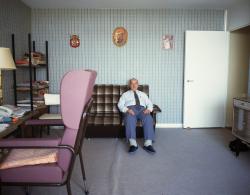 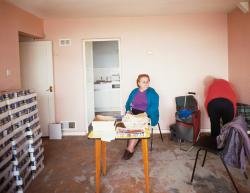 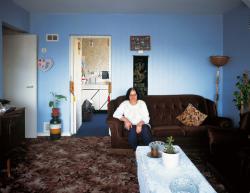 Perhaps the most remarkable thing about the show by Tom Hunter currently at London's National Gallery in Trafalgar Square is that it is happening at all. One of the bastions of the British art establishment, the gallery seldom shows work by living artists, and has never before shown a photographer.

Hunter was born in 1965 in England's west country, in the Wessexthat acts as the background and matrix within which Thomas Hardy's epic novels unfold. At 25 he came to London to study photography at the London College of Printing, finding a place to live in a Hackney street squatted mainly by other artists.

Hardy's example of looking in his local newspapers for stories as a basis for scenes in his novels inspired Hunter to turn to his local paper, where he found the street where he lived described as a "crime-ridden, derelict ghetto", and he began to make large format portraits of his fellow residents. All the work in the current show has been inspired by news stories, and have been shot using his friends in Hackney and this urban environment.

Pictorially, Hunter's work shows his admiration for the great old masters of painting, and he began more and more consciously to base his images on particular works of art, transmuted to the urban squalor of Hackney. Photographically his work perhaps owes more to the High Art Victorian stroy-telling tradition of photographers such as Henry Peach Robinson. It is perhaps true, as Richard Dorment pointed out in his Telegraph review, that the work is usually stronger the further he departs from the originals.


LIFE THROUGH A LENS


RCA graduate Tom Hunter is the first photographer to have a one-man show at Londonâ€™s National Gallery. Here he talks about his work and how it developed.

A young woman stands at a window, bathed in light, her attention consumed by the opened letter in her hand. The image is beautiful, almost ethereal, and, for all itâ€™s modernity, nigglingly familiar in its classical arrangement. In fact the work, by photographic artist and RCA graduate Tom Hunter, is directly based on Johannes Vermeerâ€™s A Girl Reading a Letter by an Open Window. But this is no mere homage to the work of the 17th century Dutch master. As the title of Woman Reading a Possession Order, suggests, thereâ€™s more to this picture than first meets the eye.

It was while studying at the College that Hunter first hit upon the idea of using art historical paintings as a template for his work. â€śIâ€™d been looking at 17th century Dutch painters and I really liked the way that they were the first people to portray ordinary people in fine art,â€ť he explains. â€śBefore then it had always been either royalty or religious iconography in paintings.â€ť But, it wasnâ€™t until one of his tutors suggested that he focus on particular images that Hunter turned his gaze to Vermeer specifically and â€śit all just seemed to come together.â€ť