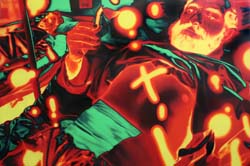 122 x 183 cm
Employing the themes of war and global terrorism, South Indian artist T.V. Santhosh paints in lurid greens and shocking orange, recreating the effect of a colour photographic negative. The artist charges his large canvases with figures in contoured and compromising positions. Like many of his politically motivated contemporaries, Santhosh lifts pivotal episodes from recent history and renegotiates their appearance with a shock-bulb of violent energy that eclipses the work. Santhoshâ€™s paintings of impending doom, a world at the brink of an atomic end, are intentionally more apocalyptic than cathartic. Tracing an Ancient Error is an illuminated work of what appears to be a bearded man lain out, revealing his chest, holding onto something resembling a thread. An image from recent news events, Santhosh captures this scene and reinvents its value as a piece of anonymous and charged history. 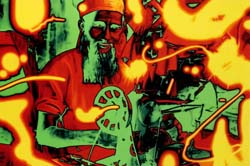 122 x 183 cm
Santhosh has switched positive for negative colours in this work. An aged man appears to be operating a sewing machine in a confined space. The artist riddles the surface with wisps of illuminated light that fall over the image like uncontrollable energy or an explosive force. Santhosh often borrows from news images in his works but in representing them through negative colours, suggests otherwise hidden implications to be surmised.

On canvas... the sooty side of the city

THE PAINTING of T.V. Santhosh can at first sight appear cryptic and contained. But closer examination reveals its provocative use of images, laid out for viewing with seemingly deceptive ease. Whose Show is it Anyway - works of Anant Joshi, Justin Ponmany, Riyas Komu and T.V. Santhosh at Gallery Espace till March 31 - is ostensibly a show of four young Mumbai artists in which the city becomes site and source, presenting concerns around the self and the mass, space and environment. Equally, in extending ripples it raises question about migration and the urban depressed, lack and the politics of lack.
One chooses to speak most extensively about the paintings of Santhosh because of the manner in which he subverts the individual and the mediatic or the received image to create a strong historical resonance. Santhosh's two paintings - Rats and Man Made Famine 1 and 11 - are a comment on the city and the nation state's inability to provide but they are also by historical extension, about gross apathy and the repetitive cycles of terrible waste. Some of the most chilling social documents are about famine, and within these, those that qualify as man-made famines. In these works, Santhosh has derived an image from the Internet which renders bald statistics visible. A man holds up a crude poster listing the number of rats killed in a grain godown. The clerical hand that has put out this information has tried to decorate the poster with little pinwheels that look like a mockery of the dharma chakra. In the adjoining painting, an unidentified labourer carries on his head the bag of grain that by inference is easy pickings for rodents, an image of plump sensuous fullness and waste even as the poverty line and starvation remain a critical reality.
The biggest movements in human history have been over food and its iniquitous distribution. The man-made famine of Bengal, of hoarding, diversion of food in a year of surplus crops, that left 2.7 million dead in West Bengal, is still fresh in Indian memory. Santhosh's work carries an echo of that memory even as it evokes Paul Greenough and later, Sugata Bose's analysis about the fatalism that attended the Bengal famine. Santhosh's work, which draws on the photonegative to give a work a spooky floating effect in this way, allies with a much larger tradition of image making, one that combines the deep cynicism of media derived images with an actual inversion of the documentary mode of recording facts.
The other artists in the exhibition present different aspects of the politics of urban cultures. Riyas Komu's provocatively titled Nervous System 1, a sculpture in iron and automotive paint, presents sleek images of the star, the hammer and sickle. The leading symbols of communist ideology are rendered pop and sleek like market commodities.
Justin Ponmany's large paintings in silver and black tones, again like the photo negative, reveal men in attitudes of work, in the sooty grind of the large city that swallows up labour with a vast blanket of anonymity. Ponmany's work has moved into an area of social consciousness that is identifiable and subtly rendered.
From an engagement with bottles reminiscent of Morandi to minimalist structures using plastic tubes and acrylic boxes that evoked the work of Eva Hesse, Anjum Singh has turned an important point in her career. Her exhibition of large oil paintings and mixed media works on view at Pallette Gallery, contains some extremely well executed works. Spill as the exhibition is called, contains the pop energy, bubble gummy colours of advertising, to communicate ideas that the artist chooses not to depict - the excesses of grime, overcrowding and the crush of bodies that make up the city street. In a sense, her work stands equidistant from the neo-realist work of Ponmany or Santhosh - it abstracts detail, flattens the vertical spaces into horizontal elements, and represents the huge flows of the city - bodies, traffic, sewage, words, noise - into an electrifying yet controlled visual field.
The gravitas of Spill is ironically offset by a corollary painting Spill Again, and the mocking edge continues in the work Cola Bloom - an installation of cola bottles, carefully cast in fibreglass, like a memorial to 20th Century dependence on synthetic satisfaction. Anjum's only concession to organic forms is the zebra and the visual puns she draws from zebra crossing now moves from painting to floor installation - one that would greatly benefit from an extension of elements. The only safe site on the busy city street is this somewhat self absorbed mammal? One is just joking.