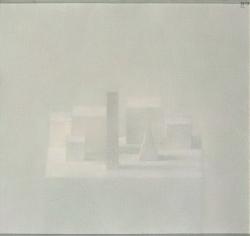 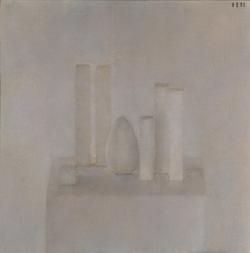 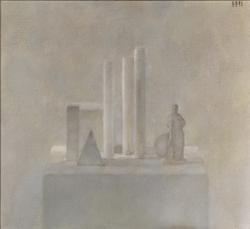 â€˜Whilst I was studying painting, I came to the conclusion that the problems of colourism in the form they existed after CÃ©zanne, have been exhausted. I began to understand that colour, not saturated with value (halftone) provides little information. Any colour complexity is a result of differentiation of pigment. The moment of final differentation comes. The pigment becomes a particle. However, this is not the limit of the complexity as the structure achieved can be glazed using complementary colours until the point that the rhythmic matches of colour do not overgrow into a harmonic whole of the entire colour ensemble. As such, I have been working on this problem of architectonics of values, trying to find a synchronistic beginning between the value, composition and drawingâ€™.

1924 - 1985
Vladimir Grigorevich Veisberg was a Russian artist and art theorist, one of the distinctive masters of â€˜alternativeâ€™ Russian painting of the second half of the 20th century, confirming his right to the avant-garde experiment. Since he was not in the strictest sense an â€˜unofficialâ€™ master, he became affiliated with the liberal wing of the Union of artists, the so-called Moscow Organisation of the Union of Artists. As a member of the group â€˜Eightâ€™, Vladimir Veisberg successfully worked as a portrait painter, although his paintings are considerably more famous. He worked at the edge of symbolism and surrealism and continued the line of â€˜metaphysical still-lifeâ€™ in the direction of an ever increasing dematerialisation and dissolution of objects into elements of light. By limiting his motifs through the selection of simple geometrical figures (cones, cubes, spheres and pyramids), Veisberg reduced the contrasts in colour to a minimum, replacing them with subtle, almost phosphorescent tonal â€˜loomingâ€™. For this reason, his still-life arrangements, for example, cylindrical columns, which he often depicted in later pieces, are perceived as a sort of revelation, transferring the inner vision as a type of meditation. Defining his latter style as â€˜white on whiteâ€™, Veisberg also justified it in theoretical terms by creating his own system of colouristic perception and embodiment, a sort of â€˜metaphysical-colourâ€™ understanding of the world (article entitled â€˜Classification of the main types of artistic perceptionâ€™ in the collection entitled â€˜Symposium on the structural studying of sign systemsâ€™, M. 1962


â€˜The Russian artist set out his at first glance â€˜absurdâ€™ idea of the â€˜Invisible paintingâ€™, also given the name â€˜White on whiteâ€™. However, works by the mature Veisberg persuade that this idea is viable, to be more precise, the entire set of ideas, the meaning of which could be defined as converting the painting from a sensual-emotional perception of colour to one which is predominantly intellectual-sensualâ€¦His colour can be differentiated into thousands of invisible (genuinely invisible) particles, forming an entirely inimitable substance which is saturated with tonal fluctuations and as if radiating from withinâ€¦â€™. E.B. Murina