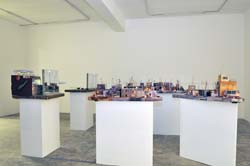 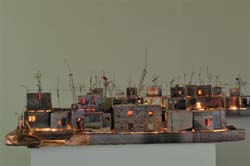 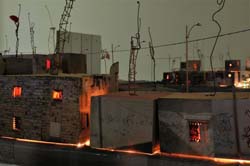 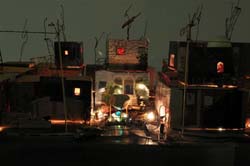 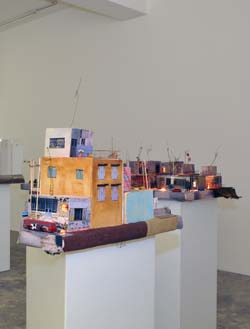 Wafa Hourani is a Palestinian artist living and working in Ramallah. Combining photography and sculpture his Future Cities projects deal with the social, political, and economic realities of Palestinian life to develop grim and apocalyptic predictions for the residents of the West Bank. Qalandia 2067 takes its name from the main check point crossing through the West Bank Security Fence which divides the cities of Ramallah and ar-Ram; it is a site of political unrest and human rights concerns. Dating his piece 2067 ‚Äì one hundred years after the Arab-Israeli 6 Day War ‚Äì Hourani has constructed 5 scale models envisioning the future of a refugee camp where time seems to have regressed rather than evolved. Basing each segment on an actual site ‚Äì the airport, border crossing, and 3 settlements ‚Äì the buildings are rendered as war-ravaged and crumbling, crowned by implausibly archaic remnants of TV antennae. Each building is a miniature light-box illuminating glimpses into the private lives of the residents through film strips placed in the windows, an unnerving reminder that this science fiction horror is, for many, an everyday experience.

Heterotopia as the process of art

Almost every major arts and culture venue in Thessaloniki is hosting some part of an enormous, ambitious art exhibition this summer. Titled "Heterotopias" and featuring 77 artists from 41 countries, the First Contemporary Art Biennale of Thessaloniki addresses the issue of "center versus periphery." Inaugurated at the State Museum of Contemporary Art on May 21, the exhibition is about locating "heterotopias" (misplacement or displacement) in global art and juxtaposing the real world with that of art.

The philosophy behind organizing yet another international biennale of contemporary art is explained by the acclaimed art historian Catherine David, former director of the famed Documenta art expo in Kassel, Germany, and currently one of the three curators responsible for the Thessaloniki event. The French curator was invited to recommend works by artists from the Middle East. Contemporary Art Museum director Maria Tsantsanoglou is curator of art from Central Asia and from the countries of the former Soviet bloc, while Jan-Erik Lundstrom ÔøΩ director of Sweden's Bild Museet in Umea - recommended artists from Africa and Latin America.

David's recommendations reveal a generation of artists who worked according to their own rules, under particular political circumstances, and who transformed reality in a truly essential manner. For many of the artists this is the first time their work will be on display at an international event.

What can yet another biennale offer?
I don't feel as though we are starting from zero, because the State Museum of Contemporary Art already has a world-renowned collection (the Costakis Collection). The event, furthermore, will offer an opportunity for the public and critics alike to become acquainted with works of art that are not normally represented in conventional international biennales organized in Europe.

Does this event have a possibility, in your view, of eventually becoming on a par with the major biennales (Venice, Sao Paolo, Sydney, Berlin)?
There are biennales that are held mechanically and artists who show their works as decor. A very interesting event in my opinion is that at Sao Paolo, because it expresses the social environment through dialogue. Berlin's, even though it has been held six times already, has failed to create a particular profile. I think that for a biennale to survive among others, it must have an identity. Of course, once the Thessaloniki event is over we will see what the city can do to promote and support it. But it is very important not to become restricted to the two dozen artists who recycle contemporary art.

Do you see any early indications as to the identity of the Thessaloniki event?
All the curators are working with artists who in the main don't belong to the so-called Western world. Our objective is not to present an exhibition that is exotic, but to present work by unknown artists who will initiate a dialogue with the so-called Western world. What is certain though is that we are not looking at their art through a protectionist or colonialist perspective.

1948 | Israelis took over Palestine and ethnically cleansed hundreds of Palestinian villages and towns. Palestin- ian refugees were forced to settle in many camps in the surrounding region. Qalandia camp was located in a piece of land between North Jerusalem and South Ramallah became home to thousands of refugees. ( Qa- landia was named after a nearby airport by the same name. )
1967 | The Israelis occupied the rest of Palestine, and Qalandia airport became a lonely military zone, except for the fact that it was located at the entrance of Ra- mallah, where many visitors from Jerusalem passed.
1987 | The first Intifada erupted and the airport became a line of confrontation between Qalandia‚Äôs residents and Israeli soldiers.
2001 | The second Intifada broke out. The Israelis built a massive checkpoint next to the airport which overshad- ows the camp. Qalandia checkpoint became the main crossing between Northern and Southern Palestine.
2003 | The Israelis built the notorious apartheid WALL to exclude the Palestinian population in the occupied West Bank. Qalandia became even more isolated from its surroundings by giant concrete blocks.
2005 | Yasser Arafat died in a hospital in France and the Palestinian people are left to fill the void left behind by this icon of their national liberation struggle.
2016 | A Palestinian from the camp by the name of Abu Jamil missed the sea and the fish so much, he dug a pool beside his home and brought a golden fish to swim in it. People in the camp say that Abu Jamil brought us the sea. The fish loved the camp so much,
she got used to the people visiting her laying in the sun and having barbecues in her pond. Soon Abu Jamil‚Äôs golden fish became a local attraction for the refugees.
2019 | After many years of living in what became an overcrowded open air prison, the Palestinian Mirror Party ( PMP ) decided to cover the WALL with mirrors to create the illusion of more space and seeing their re- flection everywhere, people began to wonder how they got in there.
2020 | Qalandia School changed its name to Impossible School. And the students closed the basketball rings. No goals in the game.
2023 | An Israeli company for tourism built near the checkpoint a discoth√®que bar with an aquarium and one golden fish. They called it Checkpoint Bar to en- courage trippy-political tourism.
2025 | Palestine made the Guinness Book of World Re- cords for the biggest mirror in the world that caused many tourists to come and visit Palestine.
2028 | Checking in the checkpoint changed from palm scanning to an audiovisual-check. As you look into the blue light you say Weehaa.
2030 | The Israelis fixed laser lights on the holes of the WALL to tighten security. The Palestinians were furious as the holes were meant to help remove the WALL, not to fix laser points in it.
2033 | The Palestinians start talking about the revolu- tion again. They build the STONE GARDEN for the 50th commemoration of the first popular Intifada in 1987.
124
Qalandia 1948-2087
2037 | The Fish died, all the camp cried and said the fish died, the sea died. They took out the water and bur- ied the fish and called it the FISH TOMB. Then the visits changed from picnics, singing and dancing to a Mar- tyr‚Äôs memorial, where flowers are laid and silence kept.
2044 | The Palestinians improved their economic situ- ation after a complete boycott of Israeli products. This prompted many investors to move from Dubai to Ra- mallah.
2047 | The Palestinians built a garden in the camp and called it the ‚ÄúFlower Garden‚Äù. It became a romantic space for young and old lovers from the camp.
2049 | Students at Qalandia School opened their bas- ketball rings but they made it very big.
2052 | Palestinians refuse to say ‚Äúweehaa‚Äù while pass- ing the checkpoint.
2058 | The Israeli government shut down the Mirror Party offices in Jerusalem as the police launch a cam- paign against anyone possessing a mirror.
2060 | The Israeli company for tourism changed the golden fish in the Checkpoint Bar to shark fish to pro- vide more adventure for the tourists.
2061 | The Mirror Party reopened their office in Jerusalem. 2063 | Palestinians use the mirrors on the wall as an
electricity power plant.
2067 | Three candidates from the Mirror Party won seats in the Israeli parliament.
2069 | The Mirror Party celebrated their 50th Anniver- sary by creating ‚ÄúThe Mirror Garden‚Äù ‚Äì a garden with a big hand mirror where people can look at themselves that came with removing the lasers lights from the WALL after the International Criminal Court rules in their favor.
2072 | Students at Qalandia School made their basket- ball rings smaller to match the size of the ball exactly, for more precise aims.
2075 | Cinema Dunia opened along with the Qala Mod- ern ‚Äì the first modern museum in Qalandia.
2081 | Someone from Jerusalem buys the Checkpoint Bar from the Israeli tourism company that owns it and converts it to AL Ajami Restaurant - Bar, featuring five golden fish in the aquarium.
2085 | The new Israeli government removed Qalandia checkpoint. The Palestinians kept the mike left be- hind and change the checkpoint to Speechpoint, a free speech area where people can say or sing what they like.
2087 | One hundred years after the First Intifada, Qa- landia‚Äôs residents celebrated in the Stone Garden after the Mirror Party‚Äôs historic agreement with the new Is- raeli government, which gives the Palestinian the 1967 lands ( the West Bank, Gaza and East Jerusalem ) along with the right of return for all refugees.
They remove the cement from the wall and fix mirrors on the other side. For some it becomes known as the Mirror Wall, while I call it Maya Wall.