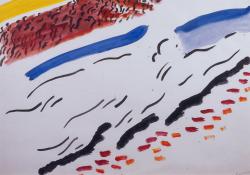 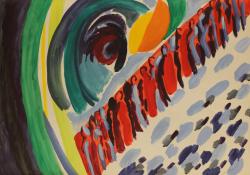 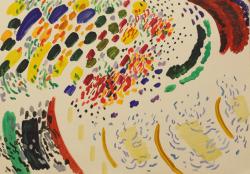 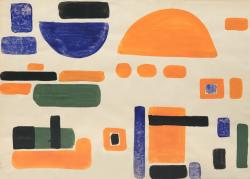 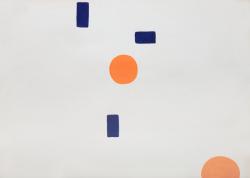 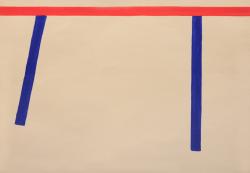 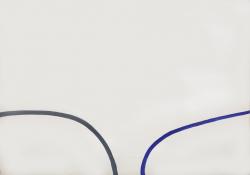 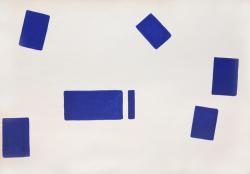 Gouache and tempera on paper 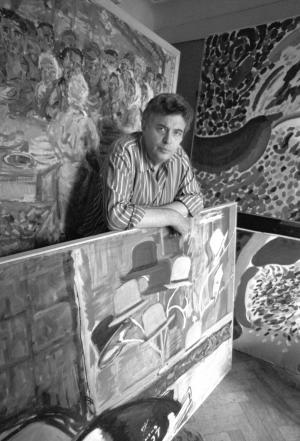 Yuri Zlotnikov is one if the pioneers of abstract art in post-Stalin Soviet Union. Zlotnikov and his school friend, the artist and mathematician Vladimir Slepyan were science enthusiasts and sought artistic analogies for the latest scientific discoveries. Influenced by the advances in nuclear physics, Zlotnikov created his first abstract work, â€śGeiger Counter.â€ť The further development of his own style came in the circle of artists who gathered in Slepyanâ€™s studio (Boris Turetsky, Igor Kukles, and Oleg Prokofiev). In their research and happenings, they elaborated new forms of abstract art as the language of a future scientific and technological civilization and achieved lapidary forms of a purist style. For Zlotnikov the result of their collaboration was the â€śSignal System,â€ť imbued with his study of Piet Mondrian and Kazimir Malevich. The artist perfected it in several series of drawings in 1957â€“1962. The foundation of the work on these series is the study of cybernetics, analysis of human psychology, tactile sensations, and the communicative possibilities of abstract art. After Slepyan exiled to the West, Zlotnikov returned to figurative CeŇ‘zannist painting in the early 1960s. He painted a series of self-portraits, as well as genre pieces and landscapes. A pendulum swing from abstract work to figurative and back again. In the late 1960s, he was back in nonfigurative work, but this time in Abstract Expressionism imbued with the early period of Kandinskyâ€™s work. Zlotnikovâ€™s connection to this tradition is evinced by his persistent attempts to convey musical sounds, as well the echoes of late symbolism, the motifs of mass movement of people, cathedral ceremonies, flights of spirits, all conveyed in an extremely schematic manner. In recent years, he is increasingly interested and impulsive, automatic, and naŃ—ve drawing in abstract improvisations. Zlotnikov, the patriarch of nonconformist art, is still actively working.

Yuru Zlotnikov was born in 1930 in Moscow. He studied at the Moscow Middle Art School for especially gifted children and attended the sculpture studio at the Golubkina Museum. He was an apprentice at the Bolshoi Theater in 1954â€“1955. He worked as a designer at the Economic Achievements Exhibition park and illustrated books for Moscow publishers. He began his extensive travels around the USSR in the early 1960s. Zlotnikov started exhibiting his work in 1962, and ten years later was accepted in the Union of Artists USSR. There was a modest solo show at the Tretyakov Gallery in 2004. The Moscow Museum of Modern Arts organised a major retrospective by Zlotnikov in 2011. Zlotnikov lives in Moscow.