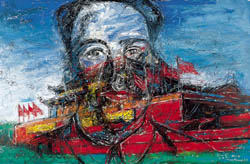 215 x 330 cm
Overlaying the image of Beijing’s infamous landmark with an iconic portrait of Mao, Zeng’s Tiananmen directly confronts China’s tenuous relationship with its recent history. Using bright bold colours, Zeng’s painting resolves as a discomforting composite of irony and optimism, fusing the veneration of revolutionary heroicism with the uncertainty of a rapidly developing future. The surface of Zeng’s painting is brought to life with a frenzied network of brush marks, replicating the inarticulate calligraphy of muffled sentiment, or the galvanisation of repressed anxiety. The figure of Mao dominates the scene, a lingering ghost presiding over popular consciousness. 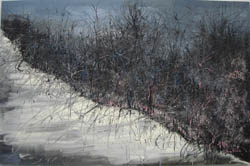 Zeng Fanzhi
This Land Is So Rich In Beauty 2


With subjects ranging from portraits and rural landscapes to politically charged motifs, Zeng infuses the everyday veneer of shared experience with an ambience of transgression, reflective of both the rapidly changing terrain of contemporary Chinese culture and the negotiation of personal identity within this societal flux.


Zengâ€™s magnificent landscapes express the vast conceptual gulf between individual cognition and the actuality of environment. Painting with two brushes simultaneously, Zeng uses one to describe his subject, while the other meanders the canvas, leaving traces of his subconscious through processes. Through this combination of painterly realism and â€™automaticâ€™ expression, Zengâ€™s landscapes are transformed into near abstract fields; the depicted people and places merging both memory and imagination. 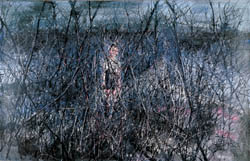 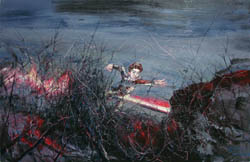 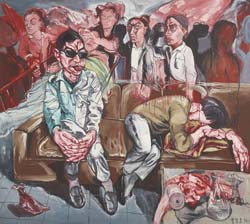 179.1 x 199.4 cm
Zeng’s Hospital Series is of his earliest work, and exemplifies his correlative approach between painting and psychology. His A&E waiting room is portrayed with overwhelming banality and trauma: muted tones replicate the staleness of public space, the milling crowds in the background appear hazy and remote, while rusty washes pour over the canvas replicating blood, sorrowful and repugnant. Sat centre stage are a distraught patient and cavalier doctor, juxtaposed as human anguish and the white-coated horror of bureaucracy. Their heads and hands are aggrandised to painful and clumsy scale in grotesque parody of thought and action.

250 x 250 cm
We n:2 operates simultaneously as portrait and abstraction. The extreme close up of a face is uncomfortably large, its beatific features becoming imposing and oppressive. Zeng obliterates this image with a mesh of ringlet patterns. Scribbled out, barred by a defective ’screen’, the effect is continuous and mesmerising, describing an impossibility of intimate articulation and knowledge, a jumbled poetry in their imperative gesture. As Zeng’s brush marks trace through the figure, colours are dragged and repositioned, creating a ghost image, echoing multiplicity and technological distortion.

wedelfineart.com
(PDF) Wedel is delighted to present its inaugural exhibition, Zeng Fanzhi: Paintings. This will be
the artistâ€™s first solo exhibition in Europe and will be held at West London gallery Allsopp
Wedel.

china.shanghartgallery.com
Additional images and information on Zeng Fanzhi
In the beginning of his artistic career Zeng Fanzhi painted apocalyptic, expressionist images, thus manipulating modernist compositional effects to intensify his sinister version of reality. His representational work reveals the place of the unconscious, the aberrant, in the construction of experience. The large, clenched hands of his subjects are almost more conspicuous than their stereotyped faces and wide-open eyes.

china.shanghartgallery.com
Zeng Fanzhi graduated from the oil painting department of Hubei Academy of Fine Arts in 1991. He moved to Beijing in 1993, and the collection of works that can be seen here reflects the transformations that have occurred in his painting during this time, and in the face of a dense, modern, and rapidly changing, capital city.

china.shanghartgallery.com
When Zeng Fanzhi was at school (1987-91), he particularly liked the work of the German Expressionist painters. In the third year of his studies, he put Soviet Realism aside and began to explore expressionistic approaches to painting.

china.shanghartgallery.com
Everyone has a face but not everyone is free to wear their face as they please. That which we call professional face and public face are refined by social training and the imitation of others.

china.shanghartgallery.com
To people familiar with Chinese contemporary painting, Zeng Fanzhi's success is closely related to his mature expressionist style and his attention to the themes of death.

china.shanghartgallery.com
To be human is to live in uncertainty, exposed to the gaze of a merciless world. There is a stark terror at the foundation of existence, coupled with a yearning for love and acceptance, or at least for a secure perch.