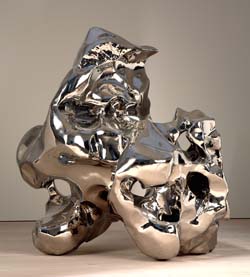 170.2 x 157.5 x 106.7 cm
Zhan Wang’s Ornamental Rock No. 71 in a metaphor for the fast changing face of China. Inspired by the public sculpture often found outside Beijing’s new office development buildings, as well as the feng shui of traditional landscape gardening, Zhan created his sculpture by moulding a flat sheet of metal to a natural rock formation; once removed, this shiny skin is reformed to create a hollow and abstract representation of nature. In Chinese custom, rocks and water are the two most important five elements, and through the sculpture’s reflective surface Zhan combines both in a spiritual emblem, merging their associative connotations of stability, prosperity, and wealth.

Whether he is forming sculptures from steel and stone, or orchestrating a happening in a demolition zone, Zhan Wang is concerned with the relationship between the opposing forces of old and new, natural and man-made form. These forces have always formed a yin-yang dichotomy within which we negotiate our lives. However, living between these forces is becoming increasingly difficult for China's urbanites as cities in China grow into modern steel and glass metropolises almost overnight.

In 1994, Zhan Wang drew attention to the speed of change overtaking old Beijing in a performance called "Ruin Cleaning Project, 94". One morning he went to a construction site on which stood a half-destroyed traditional house. He began cleaning and then painting the surviving structure in an effort to resuscitate it, but before he had finished, a team of construction workers appeared to flatten the site.

In Beijing, the new is rapidly eradicating the old. Zhan Wang believes that tradition need not disappear despite the ascendancy of the modern. His series of stainless steel rocks which he began several years ago, recreates a traditional form in a modern material. For many centuries, Chinese culture has placed a high value on strangely and beautifully shaped rocks. Rocks in a Chinese garden symbolize mountains. In tandem with water, they form a microcosmic representation of nature on a grand scale.

I was not expecting to meet Zhan Wang in the hall of the studio that day. Like a scholar coming out of his study, he was quiet, natural and calm. It was hard to imagine that this was the very artist who gained recognition in the 1990s working with rock and stainless steelŌĆöproducing his famous conceptual sculptural series of hollow Mao suits and fake stainless steel rocks and pumices.

His conceptual sculptures have been exhibited in numerous countries including Italy, France, Japan and Singapore. The Metropolitan Museum of Art in New York City has also recently acquired one of his fake stainless steel rocksŌĆömaking him one of the first contemporary Chinese artist to have a work in the MuseumŌĆÖs permanent collection.

When Zhan Wang talks about art, he references abstract notions like thoughts and concepts over critical remarks. He comments on art saying:ŌĆ£The best art should be accurate and irreplaceable. I do not regard my works as purely sculptural. I am doing contemporary art.ŌĆØ

Fond of drawing since childhood, Zhan Wang spent three and a half years studying sculpture at Beijing Industrial Arts College. With his instructors trained in the Soviet style of sculpture, his early years of study followed in this manner. He recounts this experience saying, ŌĆ£The Soviet School, namely the traditional school of sculpture was what I studied most at that time. I didnŌĆÖt get in touch with modern master sculptors like Augustin Rodin and Henry Moore until after graduation.ŌĆØ