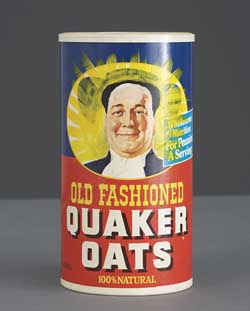 24.4 x 12.7 x 12.7 cm
Zhang Hontu grew up through both the Chinese Civil War and the ensuing Cultural Revolution before immigrating to New York in 1982. Zhangâ€™s Long Live Chairman Mao Series #29 portrays a humorously critical blend of these â€˜diametricâ€™ cultures, transplanting the omni-present image of Zedong from his childhood into a parody western logo. Maoâ€™s apparition on a box of Quaker Oats - all-American emblem of wholesome goodness - is nothing short of miraculous: The image is actually the real label, altered ever so slightly. The uncanny resemblance between communist leader and puritan farmer ironically confuses propaganda, religion, and ideology with the kitsch of advertising and cult of personality; like Elvis and Jesus, once you start looking Mao can be found everywhere.

momao.com
The website of Zhang Hongtu -
"If you stare at a red shape for a long time, when you turn away, your retina will hold the image but you will see a green version of the same shape. In the same way, when I lived in China, I saw the positive image of Mao so many times that my mind now holds a negative image of Mao. In my art I am transferring this psychological feeling to a physical object."

goedhuiscontemporary.com
Exposed to today's political events and strongly imbued with current artistic trends, Zhang combines icons and metaphysical concepts from China and the West, exposing themes that might appear ironic, yet provoke a sense of unease in the spectator. In the past, he has been known for audaciously transforming through the lens of Pop Art Leonardo Da Vinci's Last Supper into an all-Mao Last Banquet scene. Recently he has revisited traditional Chinese landscape paintings by the great masters (Fan Kuan , Shi Tao, Guo Xi) in the styles of their Western coevals (van Gogh, CÃ©zanne, Monet).

artspiral.org
Most of Zhang Hongtu's works are mixed media conceptual paintings. Zhang's images have frequently featured a central cutout, the edges of which form the silhouette of an well known cultural icons from both eastern and western culture. After the Chinese government crashed pro-democracy movement, which has been called Tiananmen Square incident, Zhang has intensively created a series of the image of Chairman Mao Zedong as a symbol of pervasive power. These Mao images really made a splash that journals, magazines, advertisers, even trendy fashion houses adopted Zhang's work.

legacy-project.org
Zhang Hongtu was born in 1943 in the Gansu province of China. His family was Muslim and his father was a leading scholar of Arabic, who was denounced as a rightist by the Chinese government in 1957.

threewatersproductions.com
Zhang Hongtu was like most youth of China in the 1960s. They initially believed in much of the ideological Communist propaganda of creating a better, equal world. Mao was an exceptionally charismatic leader. He talked and wrote passionately about the welfare of the people. A revolutionary leader often doesn't make a good peace time leader. The Cultural Revolution flame spread out of control and engrossed the entire country in ten years of chaos and destruction. Witnessing much of the incongruity and cruelty of the reality, people became deeply cynical.