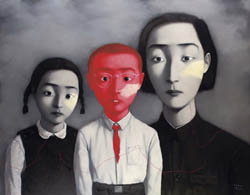 179 x 229 cm
Inspired by family photos from the Cultural Revolution period, as well as the European tradition of surrealism, Zhang Xiaogangâ€™s paintings engage with the notion of identity within the Chinese culture of collectivism. Basing his work around the concept of â€˜familyâ€™ â€“immediate, extended, and societal â€“ Xiaogangâ€™s portraits depict an endless genealogy of imagined forebears and progenitors, each unnervingly similar and distinguished by minute difference.

Often painted in black and white, Xiaogangâ€™s portraits translate the language of photography into paint. Drawing from the generic quality of formal photo studio poses and greyscale palette, Xiaogangâ€™s figures are nameless and timeless: a series of individual histories represented within the strict confines of formula. The occasional splotches of colour which interrupt his images create aberrant demarcations, reminiscent of birth marks, aged film, social stigma, or a lingering sense of the sitterâ€™s self assertion. 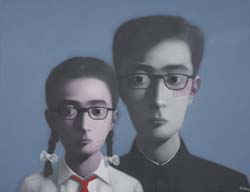 200 x 260 cm
Through his expansive clan of replica characters, Xiaogang questions notions of otherness, difference, and perception. In Bloodline, Xiaogangâ€™s two sitters stare out from the canvas with piercing neutrality, confronting the viewer with an alien gaze worthy of their own unnatural presence; the Asian conception of oneness a stark contrast to the western value of individuality. In this portrait, a father and daughter are represented with perturbing similarity, their expressionless androgyny giving them a futuristic air of superiority that can be read as either spiritual enlightenment or malice. 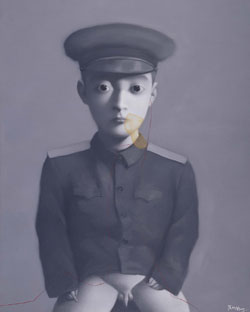 200 x 160 cm
Xiaogangâ€™s figures, with their same-same appearance and expression, allude to a disturbing mass psychology. In My Dream: Little General Xiaogangâ€™s image of a boy, dressed in military uniform and naked from the waist down, exemplifies the anxiety between public veneer and private vulnerability, official doctrine and personal conscience. Rendered with a patina aura, Xiaogangâ€™s painting is both dreary and heroic, encapsulating the optimism of a bygone era and its hind-sight failures; the child a nostalgic emblem of corrupted innocence, trapped between the romantic aspiration of the model citizen ideal and its unattainable reality. 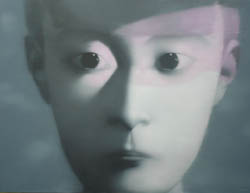 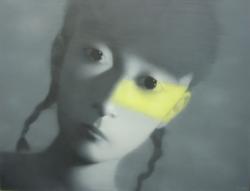 200 x 260 cm
Framed with the mug-shot candour of extreme close-ups his figures lack any definitive features; they are the generic archetypes to which all Xiaogangâ€™s figures aspire, triumphs of socially engineered conformity, interchangeable and anonymous. 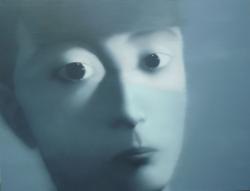 200 x 260 cm
With their visages masked in soft shadows and rendered slightly out of focus, Xiaogang heightens the sense of inconsequential identity; only the eyes are fully illuminated, hollow and clone-like, perfect identikit transplants hallmarking the succession of ductility over will. 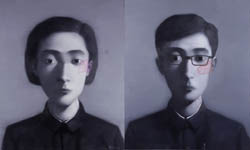 130 x 220 cm (Diptych)
Often restricted to a black and white palette, Xiaogangâ€™s portraits translate the language of photography into paint. Drawing from the generic quality of formal photo studio poses and greyscale hues, Xiaogangâ€™s figures are nameless and timeless: a series of individual histories represented within the strict confines of formula. In paintings such as Comrade, the occasional splotches of colour which interrupt his images create aberrant demarcations, reminiscent of birth marks, aged film, social stigma, or a lingering sense of the sitterâ€™s self assertion.

Between Reality and Illusion

Critical analyses of Zhang Xiaogang's work are usually based on its iconography and style, which reveal a strong consistency whether the works are studied from the angle of artistic intention or personal history. If we look at the "phenomenon" of Zhang Xiaogang, and consider elements of his art that have helped to establish his position in the art world, we can look away from Zhang's psychological and personal history, to focus on his contributions to artistic language in contemporary Chinese art.

There is a quietly seductive, as well as disturbing, appeal to Zhang's paintings. They hover between realistic depiction and dreamy illusion. Zhang has achieved this by bringing together a number of polarities. Zhang uses a technique based on western academic realism to suggest unreality and illusion; he portrays a private insular world by means of a public artistic language, hinting at unspoken public trauma through individuals' secrets. Over twenty years, Zhang has managed to resolve his own stylistic passage from an early expressionistic period to a form of classicism. In both its technique and thematic concerns, Zhang Xiaogang's art has become a canon of contemporary Chinese oil painting, and its merits depend very much on the fact that he has found new solutions to harnessing western classical academic technique (a standard in Chinese academies) to turn it into an indigenous artistic language.

Zhang Xiaogang is very much a product of the Chinese art academy system, and out of this heritage he has developed an iconography and identified a special sensibility that in many ways define this era. Because Zhang's footing is within the academy system, therefore the system may also claim credit for his success. So it follows that Zhang should be looked upon as a paradigmatic success model of the Chinese art world. Bloodline and Amnesia and Memory, the two series that have made Zhang's reputation in the 1990s, focus on portraiture, a subject underlined by concerns around the visual portrayal of the Chinese figure, especially as it involves the adaptation of western classical painting technique to local needs.

In the 1980s Western classical technique was reinstated as the norm for Chinese art academies, especially at the Central Art Academy, but the technique was never totally naturalised; apart from the fact that academic art was held back by conservatism, falling behind the vanguard in experimentation, it has not created a completely satisfactory "Chinese" solution to technical approach and stylistic expressions. Zhang's answer to this problem is to revive the charcoal portraiture technique developed in the Republic era, so as to capture subtle facial expressions through a surface treatment approaching flatness.

This solution makes a cultural connection with the pioneering era when western painting technique was first successfully borrowed by popular art to portray the figure, when it was adapted to mass culture in the spirit of popular folk taste. It is therefore close to traditional Chinese taste, hence successful in making claims to be a new paradigm.