Zhivago Duncan
To Separate The Bacon From The Fat Is Impossible: M.A.M.V22a.B8 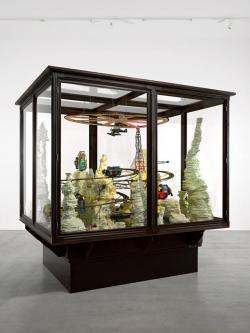 300 x 307 x 250 cm
The artist explains: ‚ÄòPretentious Crap [2010-2011] is the result of the imaginary journey of Dick Flash, the world‚Äôs sole survivor of the apocalypse according to him and his legacy. Semi-amnesiac, Dick Flash roams the converted world digging up the fruitful remains of his debauched ancestors. Without any recollection of his personal past, Dick Flash does, however, experience moments of epiphany, in which abstract notions of the origin of self, a collective memory, and the accumulated trials and tribulations of humanity are vaguely delineated, as revealed to him in prophetic visions.‚Äô

This work is one of Dick Flash‚Äôs relics from his journey, a cabinet in which former art objects are reinterpreted as mysterious ruins. It‚Äôs as if Flash is re-writing the history of culture through his chaotic assemblages, starting from scratch, like an artist, taking on an √úbermensch persona.

‚ÄòWith no memory of his former life, Dick Flash naturally rediscovers his affinity for physics, kinetic energy, and his predisposition for philosophical reflection. By repurposing found scraps of metal and steel, the skeletons of automobiles and locomotives that have somehow withstood civilization‚Äôs destruction, and random matter once considered waste that has ironically survived its very creator, Dick Flash fabricates a new iconography, commemorating his interpretation of an extinct empire and its tragically flawed constituents.‚Äô