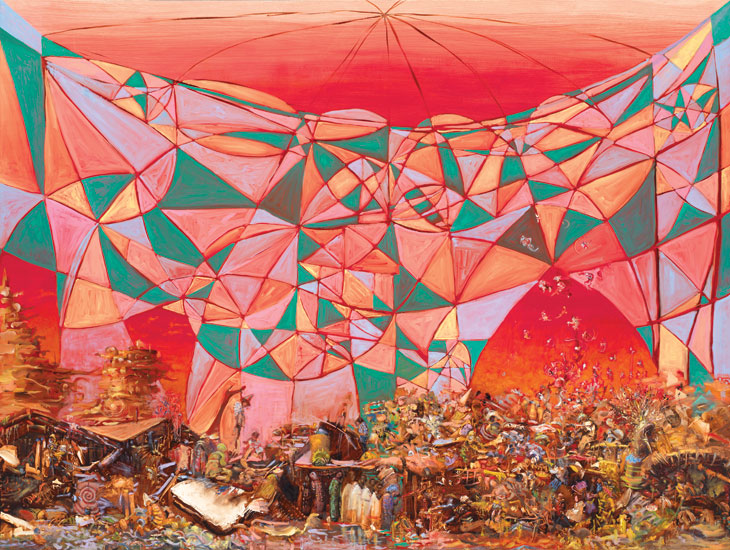 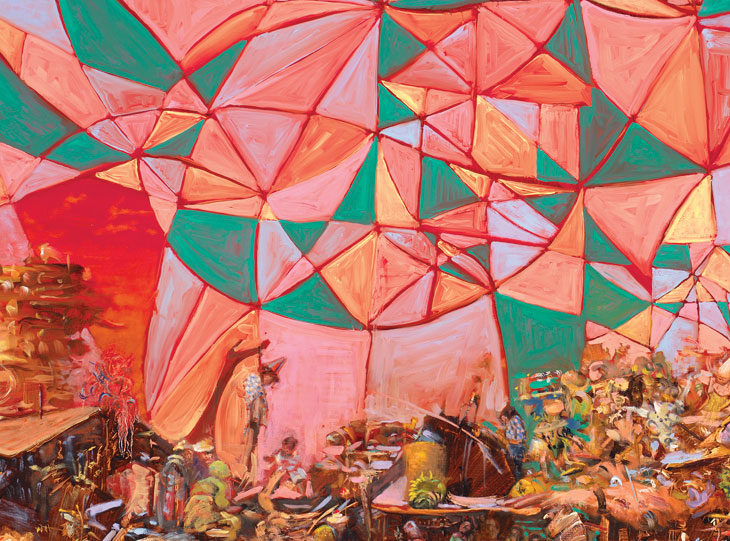 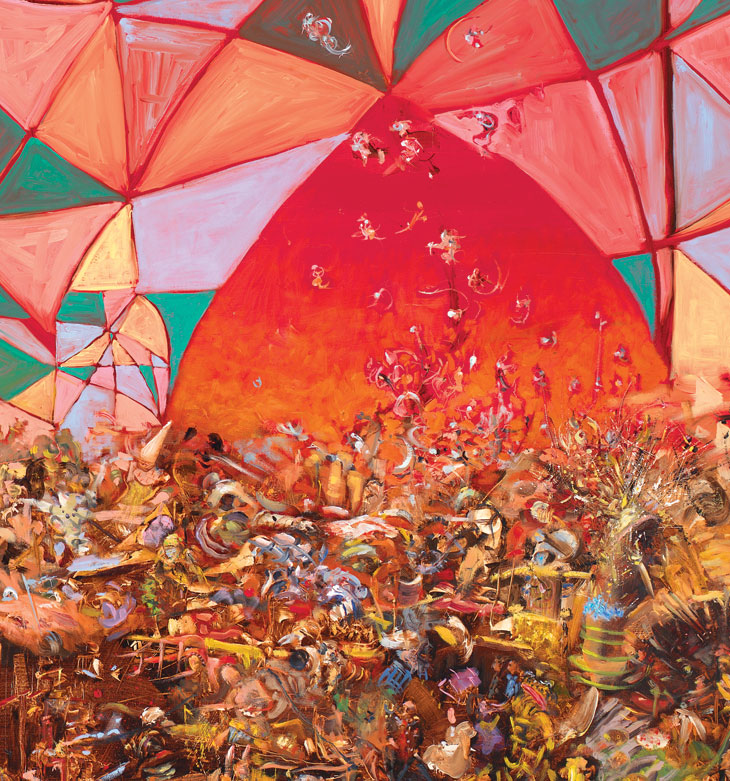 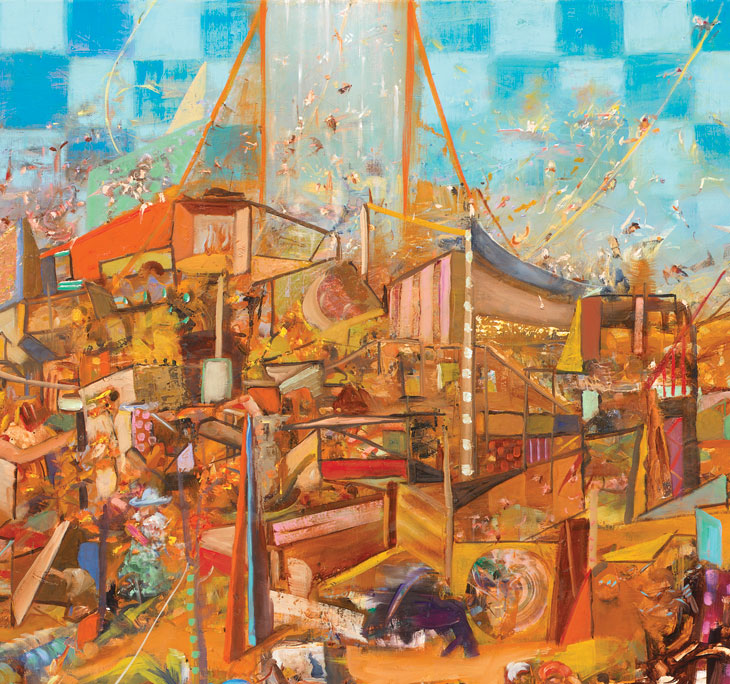 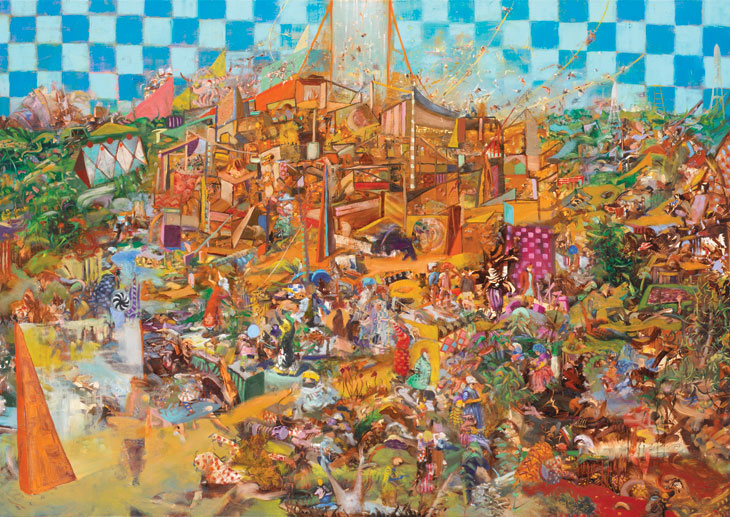 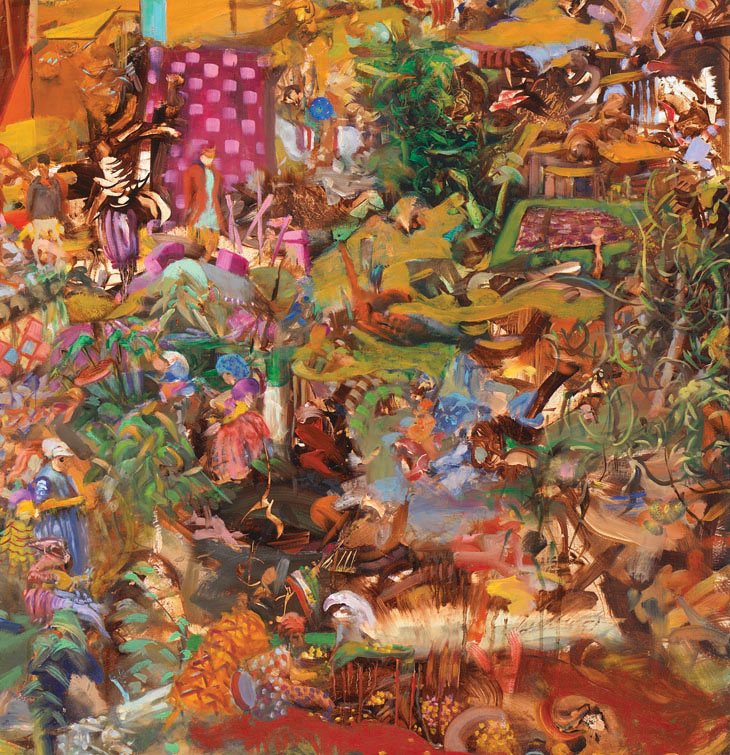 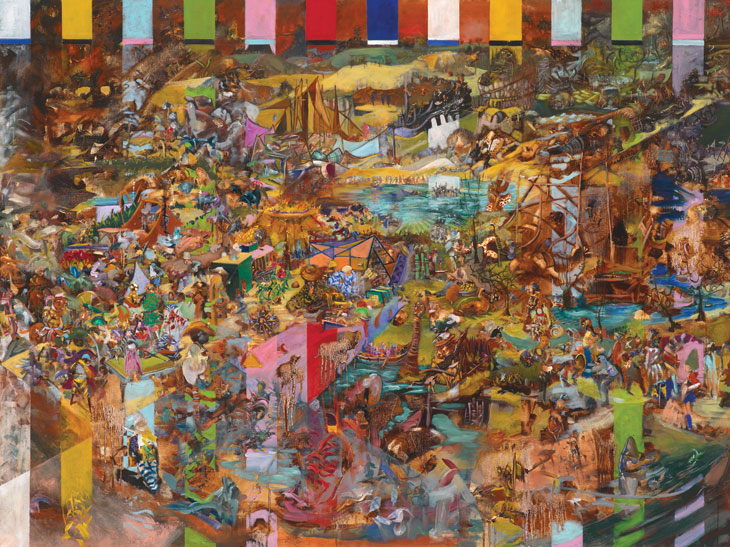 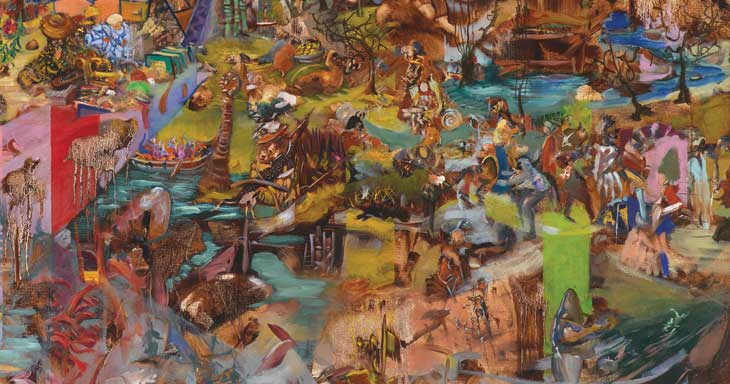 Ali Banisadr is originally from Tehran, but moved to America when he was a child; his works are influenced by his experiences as a refugee from the Iran-Iraq war and his approach to abstraction evokes connotations to displacement, memory, nostalgia and violence. In The Name Of possesses all the qualities of a fantastical landscape, its rich aromatic colours disseminating a fairytale orientalism that’s both majestic and medieval. Amidst his lush surface, splendour gives way to embellished anarchy and carnage as onslaughts of painterly gestures replicate the chaos of an attack. The fractured background, reminiscent of stained glass, is inspired by his recollection of the sound of shattering windows during bombings. This synaesthetic connection between auditory memory and visualisation is consistent throughout his work.

In Banisadr’s paintings, his own memories become combined and fused with Persian mythology, such as Marco Polo’s discredited story of the Hashshashin, a militaristic sect whose members were drugged and made to believe that the gardens behind their mountain top fortress were actually Heaven, where obedience might be rewarded by short visits, replete with feasting and vestal virgins. Land Of Black Gold conjures tales such as this through its elaborate composition and suggested narratives. Influenced by Persian miniatures - small intricately rendered illustrations similar to illuminated manuscripts - Banisadr’s canvas spans like an ancient map, a spatially skewed terrain of detailed activity. Throughout is a disorientating sense of wonder as angular shapes propose topsy-turvy architecture, out of scale figures are formed from indulgent dabs and exotic fauna and pools evolve from luscious smears and layered washes. Rendered in the golds and blues associated with European religious painting, Banisadr baths his scene of earthly pleasures in a divine glow, ignited by bombardments in the distance.

Often compared to Hieronymus Bosch, Banisadr’s portentous scenes are spellbinding in their finite description. From a distance their intensely busy surfaces appear to be rendered in microcosmic detail, yet when viewed close up, recognition dissolves into a frenzy of sensitive and compacted brush work. Banisadr handles paint with a sentient physicality, his extravagant textures and vibrant tones visually translate the experience of taste, smell, and especially sound into fields that extrapolate cacophonous rhythms. In Prisoners of The Sun (TV) this sensory disconcertment is echoed in its allusion to temporal collapse as antiquated scenes of imagined civilisations blend seamlessly with TV test patterns, the hard-edged geometry of mass media linking disquietly with the strata of ancient mysticism.
×