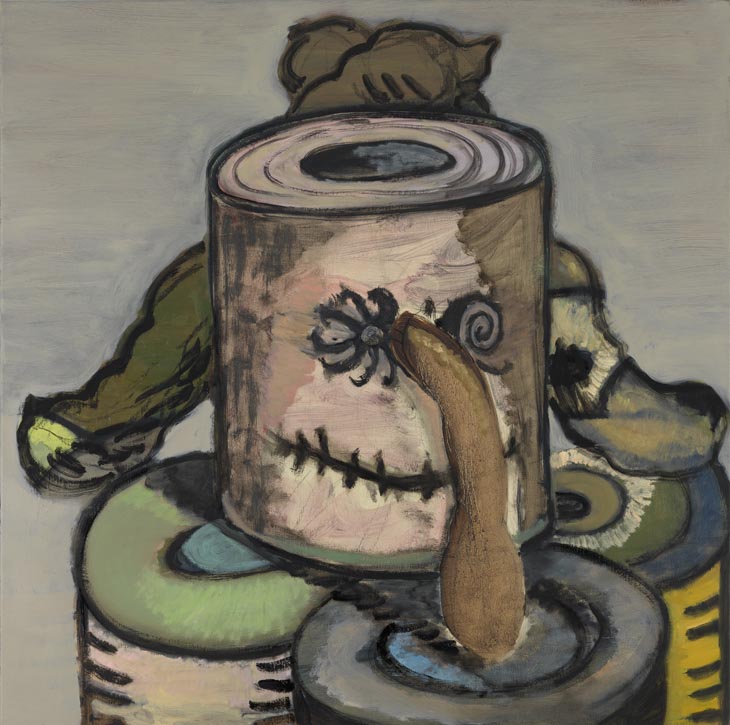 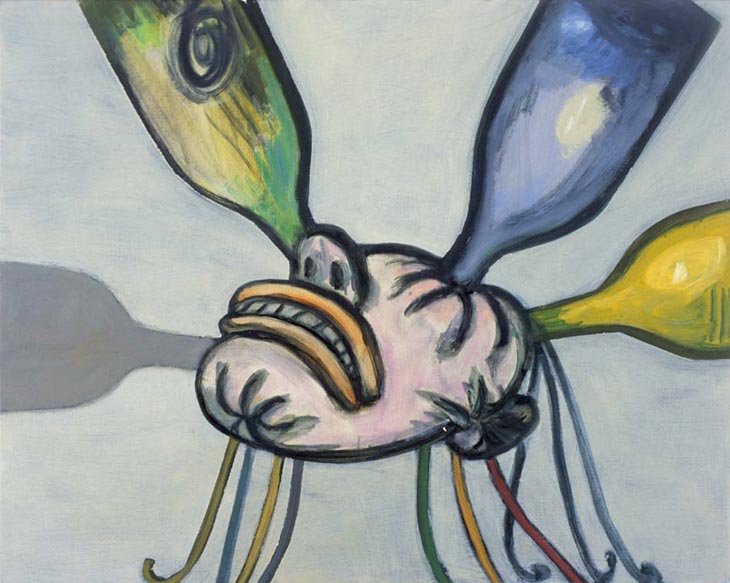 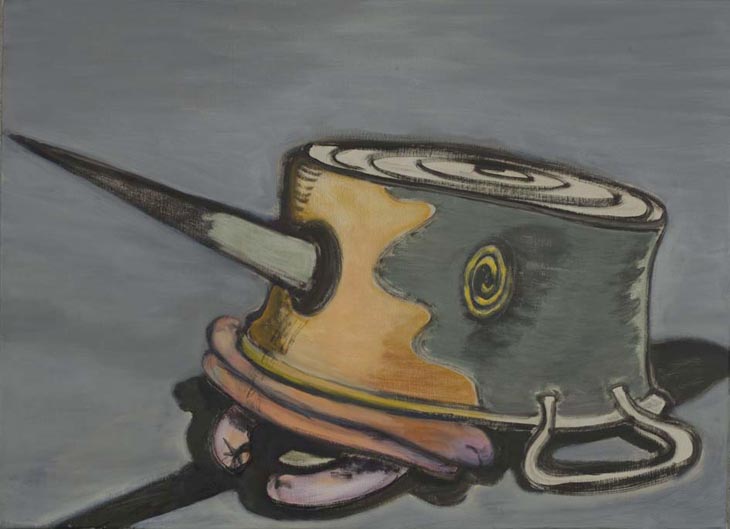 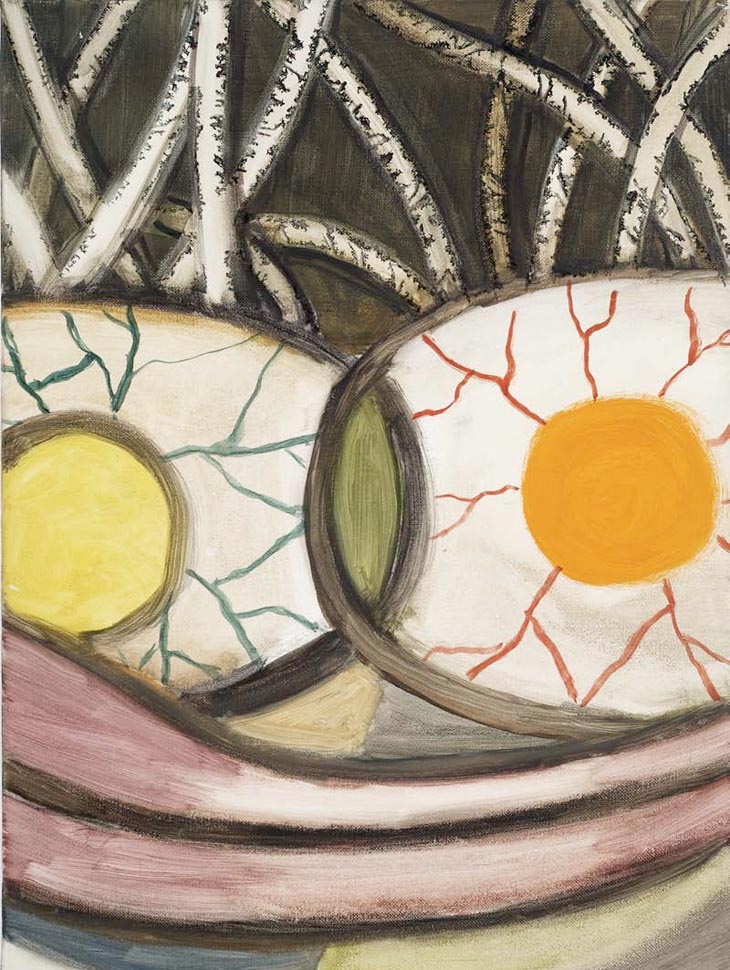 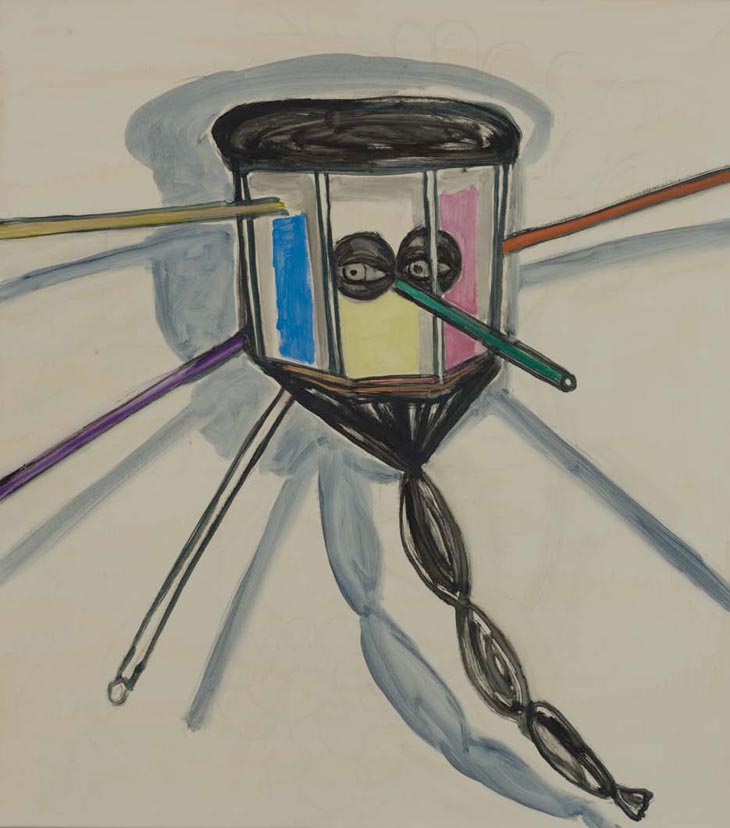 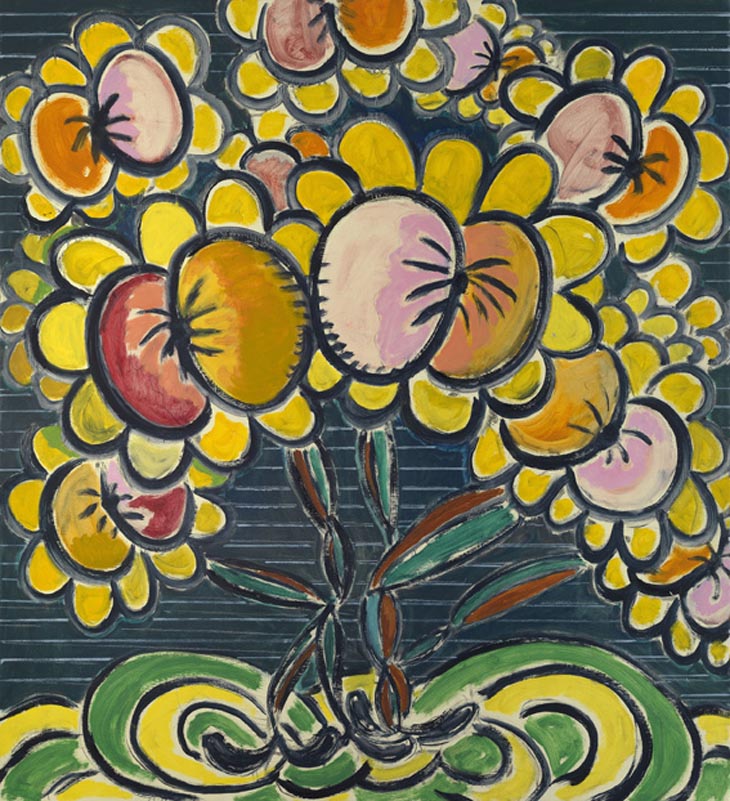 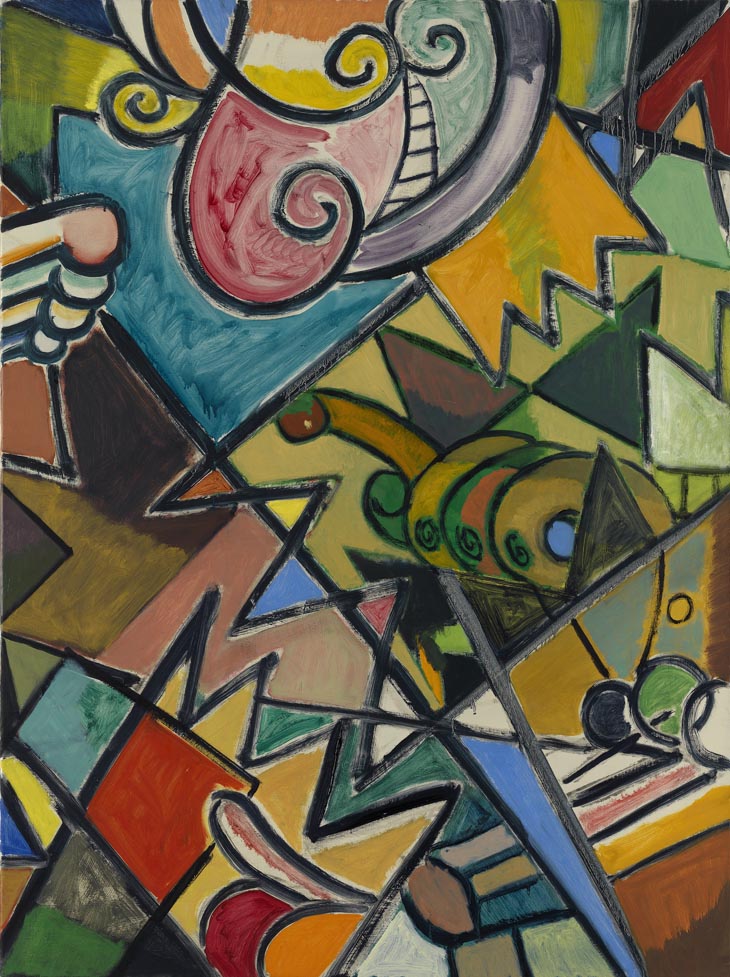 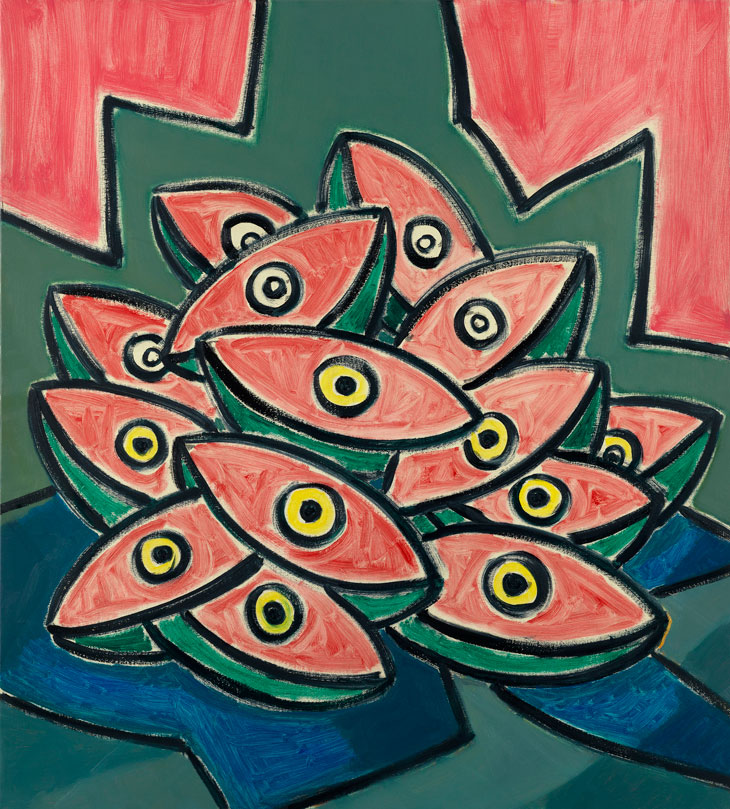 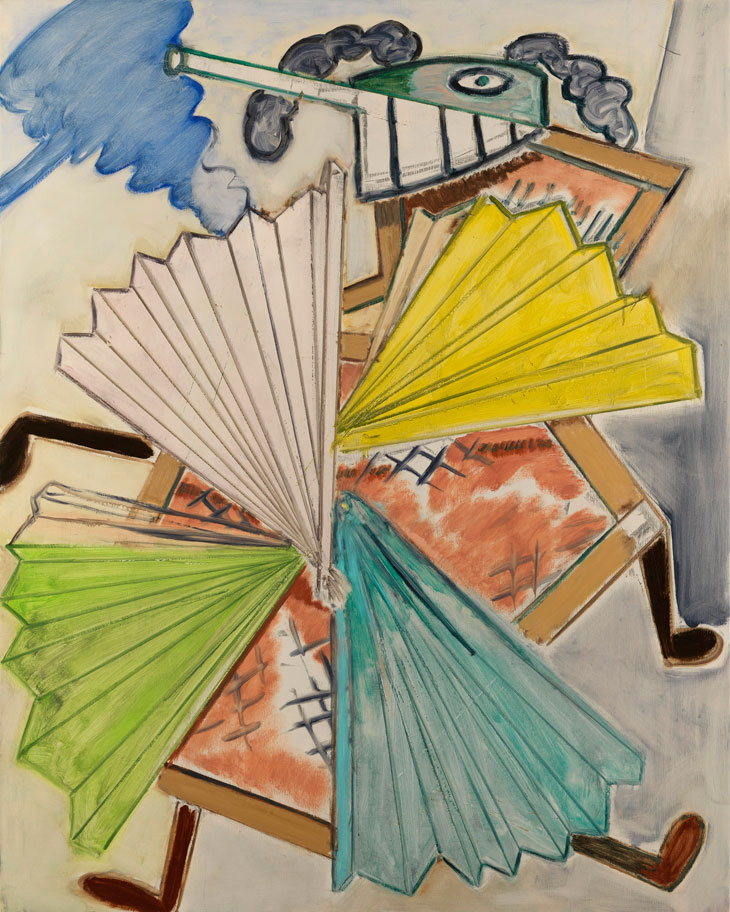 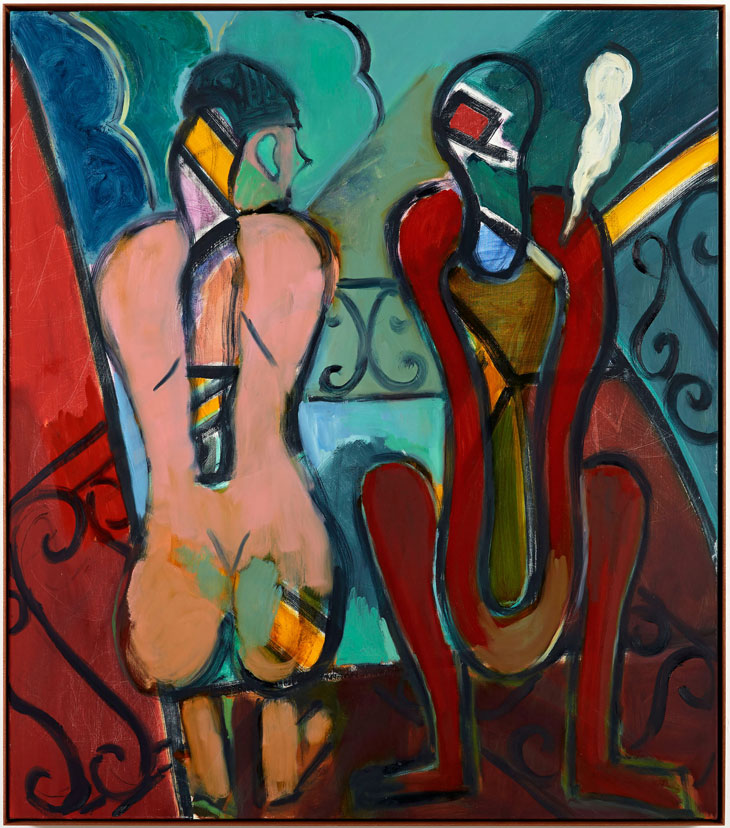 Ansel Krut’s Napoleon On Elba was inspired by Ingres’ 1806 painting Portrait Of Napoleon On The Imperial Throne which depicts the emperor with ostentatious pomp and glory. “I was thinking about portraiture and power and wanted to paint something in response to that. There was something about the painting’s title, and the paleness of Napoleon that made me think of toilet paper. Rendering him as stacked loo rolls is a reflection of the absurdity of official portraits. I worked from a model I set up in my studio: I had to buy cheap toilet paper to get the right tactile quality, and I made the turds from plasticine. The muted tones relate to the density or materiality of the paint itself, which looks slightly digested as if it has run through some sort of system. I wanted the paint to carry the same kind of messages as the image.”

“I try to create strange juxtapositions in my work, to build a kind of contradiction in pictures. Head With Bottles is about having a hangover. I don’t drink but on the odd occasion when I do it goes straight to my head, so here I’ve painted alcohol being poured directly into someone’s brain. The colourful strands are the hair, but also the contents of the bottles and brain leaking out. They look like fingers running along the bottom of the canvas. I like these because they introduce a strange possibility of movement. All of my works create a series of conflicting or paradoxical expectations, and this includes the tradition of picture painting. I draw from both classical portraiture and cartooning to reconcile these traditions. I see cartooning as the same as any other art historical genre. I like the direct flatness that facilitates the immediate understanding of something.”

“I do lots of drawing and work out my images as sketches, and work up to introducing colour. Then if it feels like it could be translated into a painting I’ll paint it. Saucepan With Spilled Sausages plays off the notion of portraiture. Somehow in painting one can be torn between contradictory images: the image is at once a saucepan and sausages but it is also a head. As a painter I try to put contradictory things together so my painting retains this paradox. The image flits between these two possible states. This work also has a slightly militaristic feel because of the colours. It looks something like a helmet, the handles are earflaps, and the sausages are in the shape of a mouth. I’m interested in perception: painting something you might catch in the corner of your eye where you might think ‘did that actually assume that shape?’”

“Little Fry-Up is a painting I made about breakfast. I used to sit in a greasy spoon cafe before I went to my studio, and really liked that environment; it always made me feel really happy. One day I thought ‘what if this breakfast could come to life’ and made this painting of fried eggs and rashers of bacon staring back at you. I grew up in South Africa and felt far away from European art traditions, and it wasn’t until I came to live here that I was able to stand in front of great paintings in galleries. All of those artists were radically unconventional and broke the rules or assumptions about art. I try to approach my paintings in a way that doesn’t adhere to expectations.”

“‘Matelot’ is the French word for ‘sailor’, and sailors used to be called ‘tars’ because they put tar in their hair to keep it from blowing about. The black paint I used has a tarry quality. The figure looks like an old-fashioned lantern, and seems anachronistic, or out of place in time. All of my paintings are about some kind of confrontation or engagement with the viewer. The character is looking out at you, not challenging exactly, but it’s asking you to deal with its strangeness: that it is a head, but not really a head. It’s just taking the position of being a portrait without actually being one, it has the assumption of portraiture. I try to upturn those expectations.”

“For Arse Flowers In Bloom I wanted to paint something that was challenging and direct. The image happens in two places simultaneously: they are flowers, but they are mooning at you. The white lines in the background make the space quite shallow, and suggest a venetian blind or lines in a text book. I wanted to keep the painting quality as uncomplicated as possible, and keep the drawing of the flowers simple to reinforce a kind of perversity. I’m interested in how crude you can make an image and still carry it off in other ways. When looking at this painting it’s difficult to hold its two propositions in mind. In some ways it’s quite nicely painted, but it’s also some arses confronting you. How do you reconcile the extremes of possibilities in the same moment?”

“When you look at a painting it’s about painting, but also many other things. Within painting you can change the speed of a brush mark or put one colour over another. It alters the meaning in every way, the narrative speed in which it’s understood. There are choices which are set up for the viewer: you can understand something one way or another. In Shattered Man you can see a head at the top of the painting, and there are feet and hands and genitalia. They’re all separate but belong to the same figure. The man has an insane grin, and he’s about to touch something sharp, like the way we’re drawn to prod a sharp piece of glass even though it’s likely to cut you. This painting feels a little dangerous and fragile; it’s like a shattered window which might be a reflection of a ‘self’. There’s a sense of self-consciousness in all of the figures I paint. They believe in themselves: it isn’t a head, just a series of patterns, yet it takes on the shape of a head, it has a self-belief. The images exist in a realm of self-motivated possibility.”