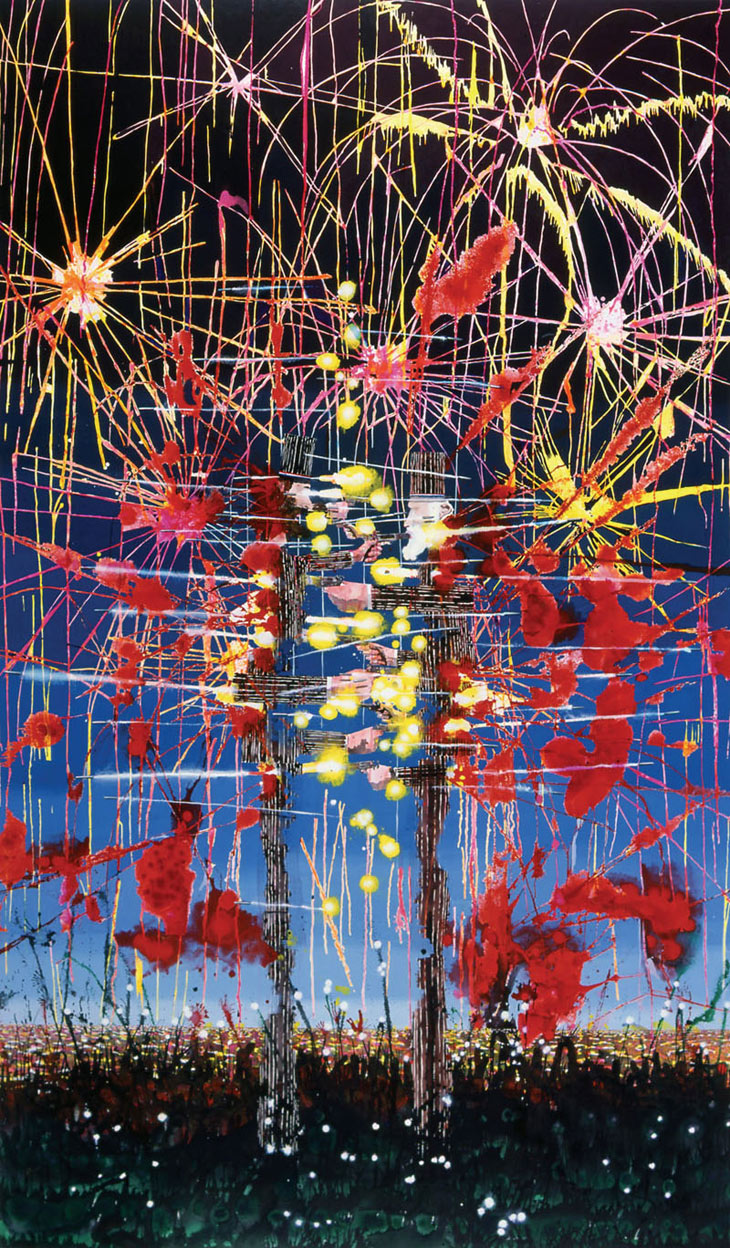 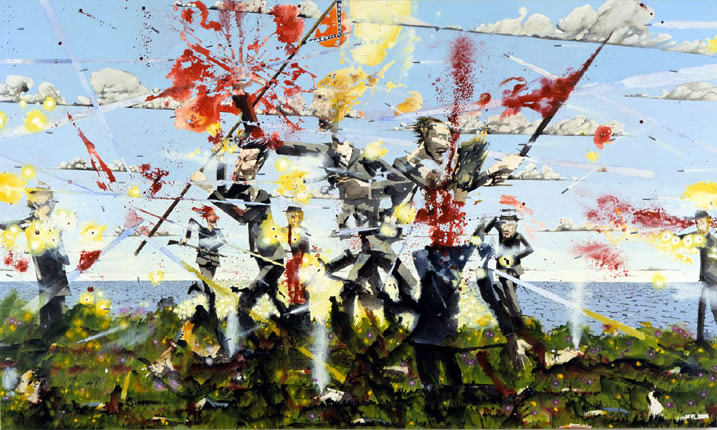 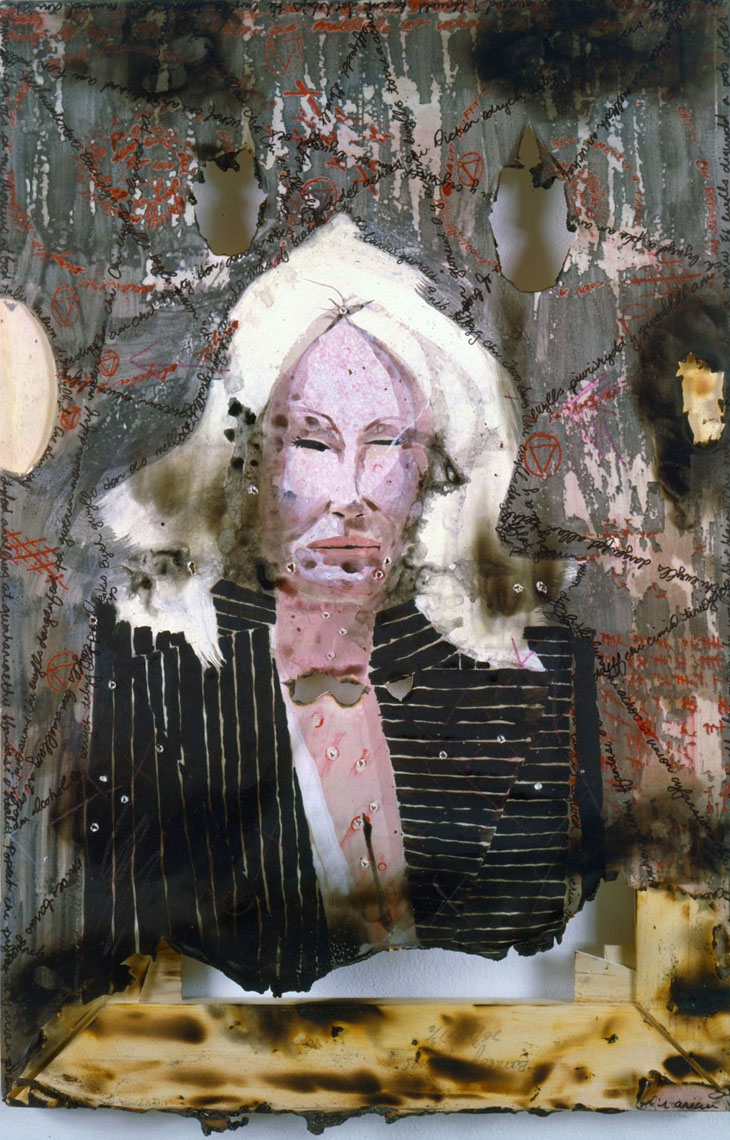 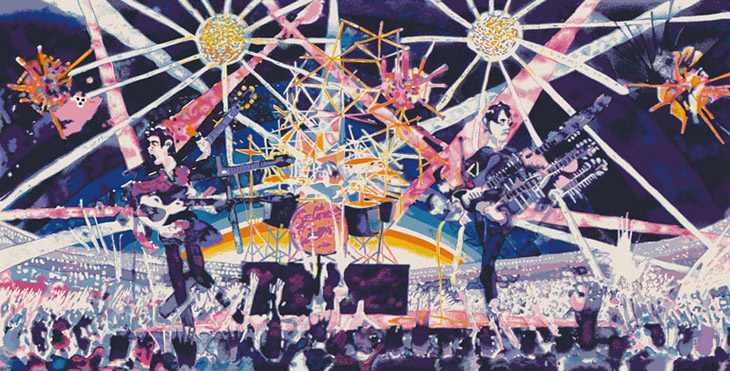 Barnaby Furnas uses watercolour in a way it was never meant for: rivalling media sensation for the limelight of graphic seduction. Developing his own subversive world of cartoon ultra-violence, bizarrely populated by rock stars and Honest Abe look-a-likes, Furnas uses blood and guts as a means to flirt with abstraction and design. In Duel, two ex-presidents blow each other to shreds, simply for the sake of seeing the beauty of the carnage in slow motion.

Barnaby Furnas’s paintings address contemporary image construction through traditional means. Adhering to painterly convention Furnas mixes his own paint by adding pigment to urethane, a technique that results in radiant finish and pure vibrant colour. Conveying the high-impact dynamism of filmic violence, his canvases merge depicted narrative and formal concern. In pieces such as Hamburger Hill, action is played out in performative brushwork and striated composition: gun powder explosions and gory splatter are represented through simplified gesture, movement is directed through drawn and implied lines. Combining the strategies of cartooning with the decadence of high art, Furnas conceives painting as a media entrenched in historical lineage and constantly expanding to encompass new attitudes of viewing.

Reminiscent of Rothko’s vast contemplative fields, Barnaby Furnas’s Flood (Red Sea) draws upon the associations of Abstract Expressionism. Spanning over 7 meters, Flood (Red Sea) construes the transcendental as sheer power. Obliterating the serene blue ‘sky’ with frenzied swipes of red, Furnas presents a landscape as an encompassing plane of colour and texture that literally engulfs the viewer in spectacle. Incorporating biblical reference in the title, Furnas layers his abstraction as allegory, merging painting’s formal and narrative traditions in a tableau of apocalyptic beauty.

Using his materials to replicate bodily substance, Barnaby Furnas’s Untitled (Effigy II) is executed on the membrane surface of calf-skin vellum. Charred, punctured, and adorned with tattoo-like script, his figure sits as an emblem of torment and catharsis. Adopting the timeless and immortal qualities of portraiture, Furnas exposes the stretcher and canvas to both undermine and appropriate painting’s function as illusion. In revealing the image as a construction, Furnas evokes a sense of occult mysticism. Bringing to mind Wilde’s The Picture of Dorian Gray, or Poe’s The Oval Portrait, Furnas cossets the idea of representation as a black art.

In creating Tapestry, Barnaby Furnas captures the vibrant fluidity characteristic of his oil and watercolour paintings. His complex layered and gestural painting style is uncannily replicated in the premeditation of graphic design. Utilising the historical craft of weaving, Furnas places his rock concert on a par with historical depictions of epic battles and heroic royalty. Violence, chaos and pagan hype become immortalised as decorative patterns. Razor sharp light beams, tie-dyed psychedelia and clamouring mosh-pit lose their threatening edge, traded instead for a more monumental documentation, distanced and glorified through the time-honoured tactility of hand-crafted fabric.