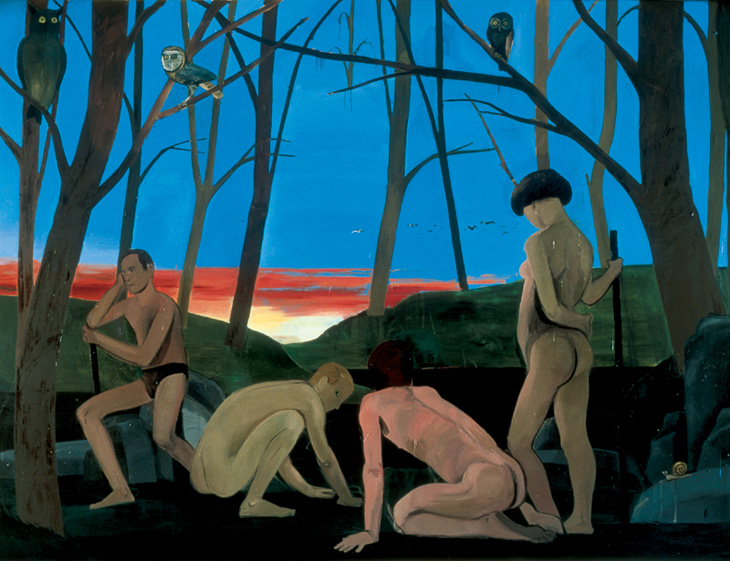 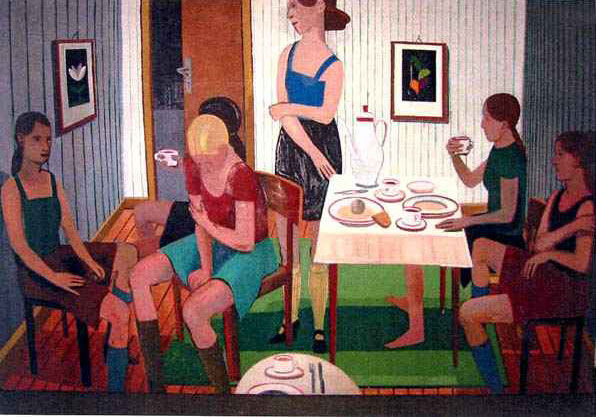 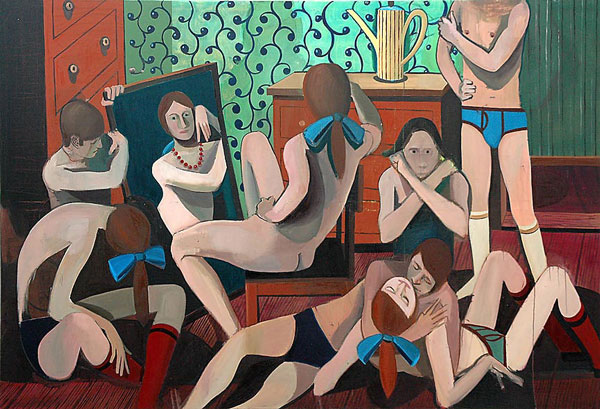 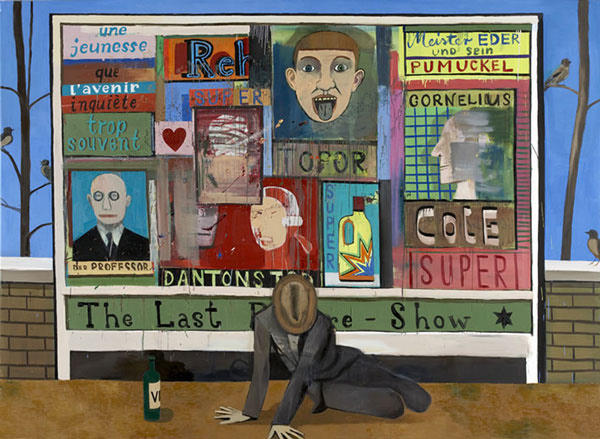 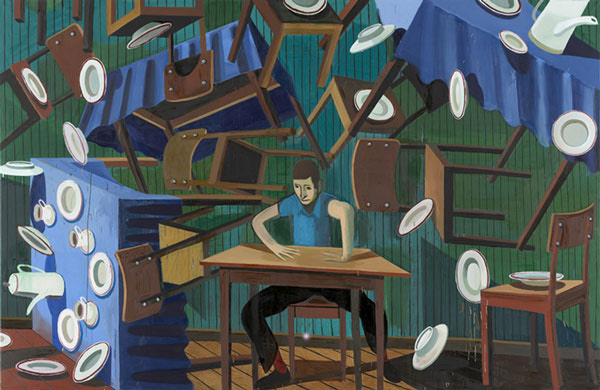 Christoph Ruckhaberle’s leisurely scenes operate like dysfunctional stage plays. Cribbed from all the best bits of art history, he imbues his scenes with a contemporary newness of vivid patterns and design colours. His elaborate sets are backdrops of static energy against which his cast nonchalantly mingles: placid and bored, unaware of their own interaction with an expectant audience. This sense of waiting is the delight in Christoph Ruckhaberle’s work. Charmed by the pure casualness of it all, his paintings offer the possibility of getting lost in a moment, a luxuriating pause where visual harmony is appreciated as inert ideal.

The tea party in Christoph Ruckhaberle’s Untitled plays an optical illusion; this pleasant image deconstructs itself into a myriad of coloured components, oscillating between narrative scene and formalist abstraction. Christoph Ruckhaberle approaches this painting as a compositional jigsaw puzzle, each element an individually delineated shape filling a gap in the whole: L-shaped knees disjointedly connect to rectangular skirts and socks, geometric furnishings float without a sense of grounded order. Through subtle repetition of form, Ruckhaberle creates a systemic visual harmony; a contrived soothing comfort through which a surreal suspense passes almost unnoticed.

In Untitled, Christoph Ruckhaberle’s figures languish with models’ detached poise; his sybaritic group is neutrally depersonalised as compositional study. Christoph Ruckhaberle renders his characters as emotionally self-contained objects of fetish, their interaction limited to physical positioning: tangled masses of pink forms and dark shadows, right angle patterns of arms and legs, all melodically punctuated by colour co-ordinated accessories. Approaching his painting as a harmonised rhythm of visual components, Christoph Ruckharberle develops an aura of earthy sensuality through the qualities of abstraction and painterly surface rather than narrative characterisation. The central figure reflected in the mirror gives false promise of psychological depth: her self-contemplation reveals only a further complexity of formalist intrigue, and a teasing acknowledgement of historical lineage.

Christoph Ruckhaberle conceives Plakatwand with an intentional staginess. Rendered with the rigid artifice of theatrical backdrops, Ruckhaberle’s billboard-scale canvas approaches painting as a vaudevillian construction: a clichéd scene consciously exposing its own formulaic aspirations. Mixing techniques between naïve stylisation and impassioned gesture, Plakatwand is tinged with both humour and pathos. Ruckhaberle pictures the artist/vagabond as a comitragic figure, an idealistic bohemian crippled beneath the proliferation of mass-produced imagery and commercial message. Christoph Ruckhaberle approaches this canvas as several paintings in one: independent territories of brick, sky, wall, figure, become compressed to a single claustrophobic plane. From this referential abstraction, Ruckhaberle poses his painting as a romantically fatalist yet classically spectacular production.

Christoph Ruckhaberle’s China executes the power of will over logic. Using painting as a tool of invention, Ruckhaberle’s scene defies reason in exchange for paradoxical intrigue. Furniture and tableware fly in violent chaos while retaining an effect of controlled calmness, their psychic energy resonating from the concentrated central figure. Ruckhaberle renders this image with unsettling impartiality; psychological torment becomes a problem of geometric design. Motion is frozen in compositional elegance, fragmented into oscillating squares and orbs. Neutralising his subject matter, Ruckhaberle creates a sense of magic through the complexity of construction, making the impossible accessible through discipline and volition of imagination.
×