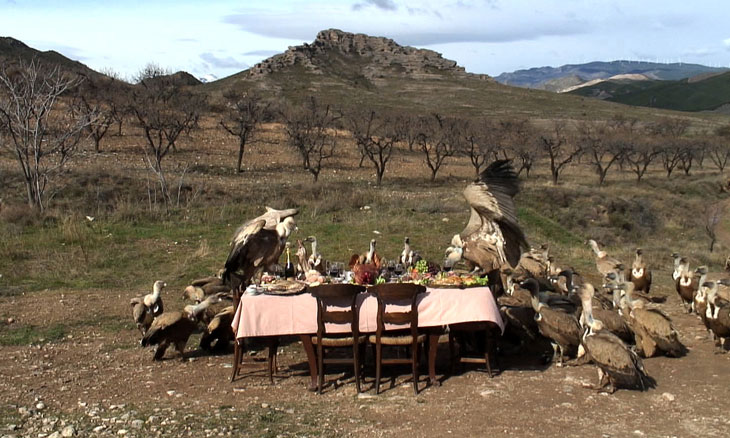 From its title (meaning "in the blink of an eye") onwards, Greta Alfaro’s In Ictu Oculi is concerned with the viewer’s experience of time: the eye is yours. The work’s title, which alludes to the brevity of human existence, is shared with a number of vanitas paintings from the seventeenth century, and, like them, Alfaro’s video treats the stuff that surrounds us as coded references to our own demise. A dinner table, laden with plates of food and wine bottles, its chairs waiting to be occupied, stands in a scrubby, semi-mountainous landscape, a breeze flickering its tablecloth. The table’s placement, in the centre of the frame (the shot is still), makes unmistakeable allusion to painted conventions – the Last Supper, the Supper at Emmaus. And yet the occupants, when they arrive, transform the table’s Biblical and epicurean suggestions into something nightmarish and deathly. The stilled moment of the painted meal becomes subject to cinematic time: movement is change. Vultures descend, from nowhere, their bulk and scrabble bringing instability to the implied order of the scene. Yet the meal’s duration, and its strange quietness (aside from the flapping of wings and chink of claw on plate) lend it a human quality: this might be the soundtrack to a medieval banquet. The birds here, like Hitchcock’s, act out repressed human desires (to gorge oneself): they’re us, with the mask off.