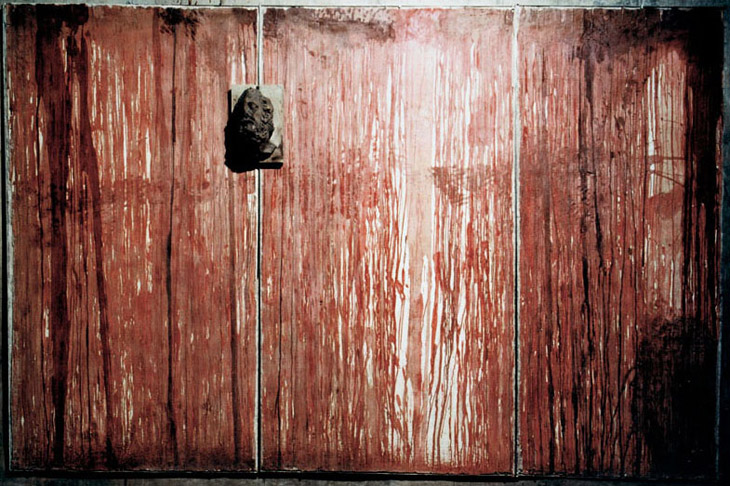 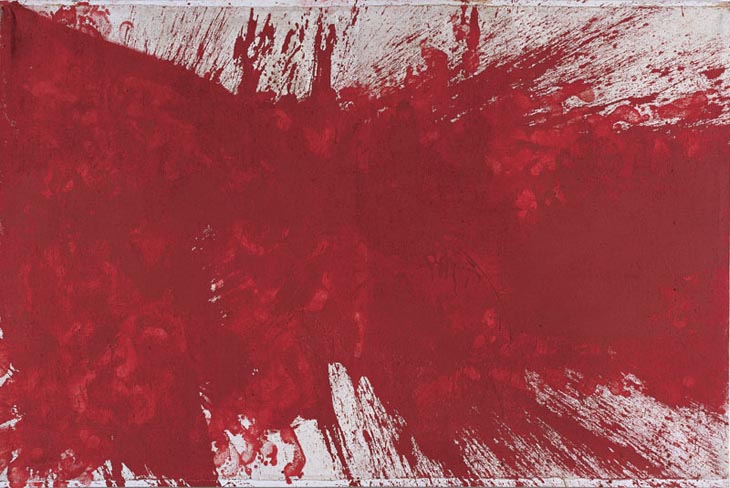 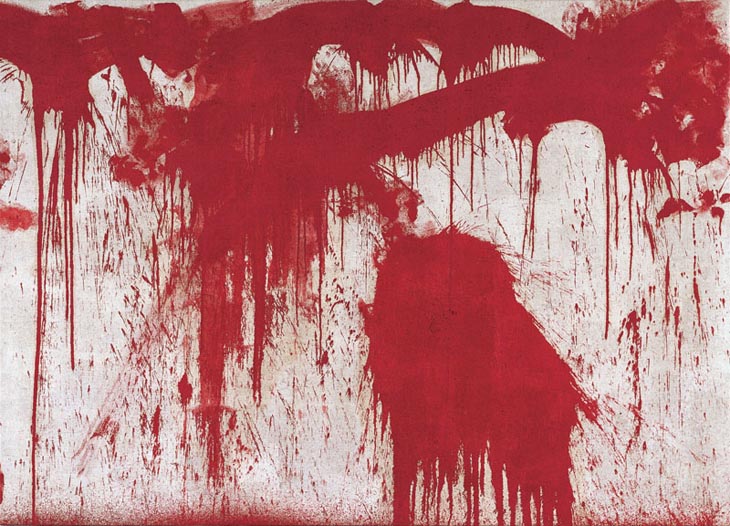 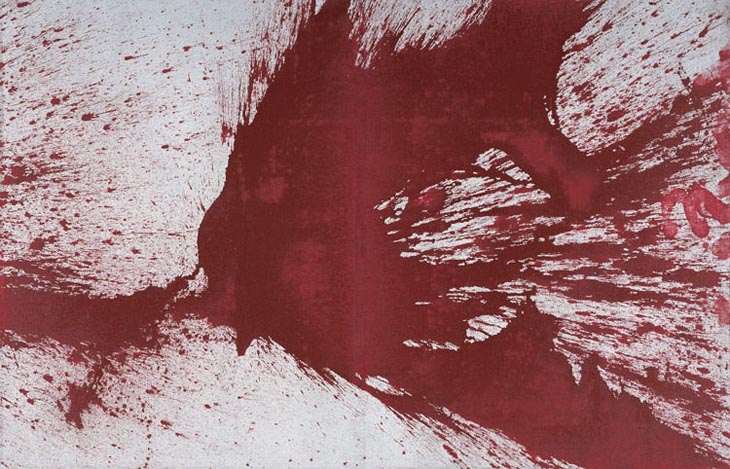 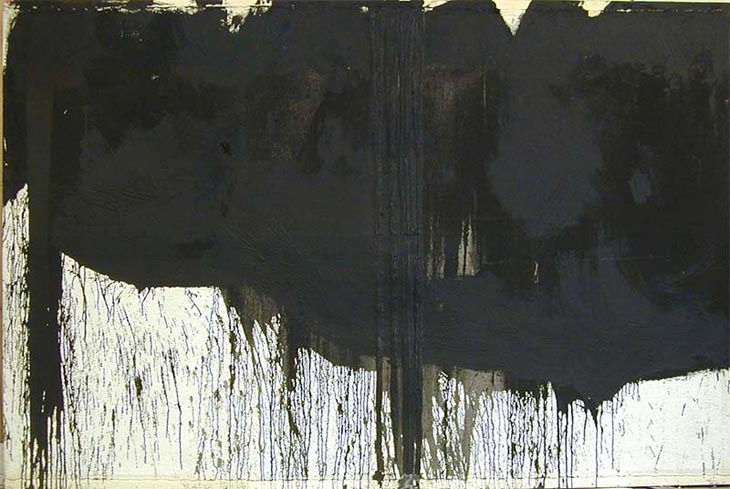 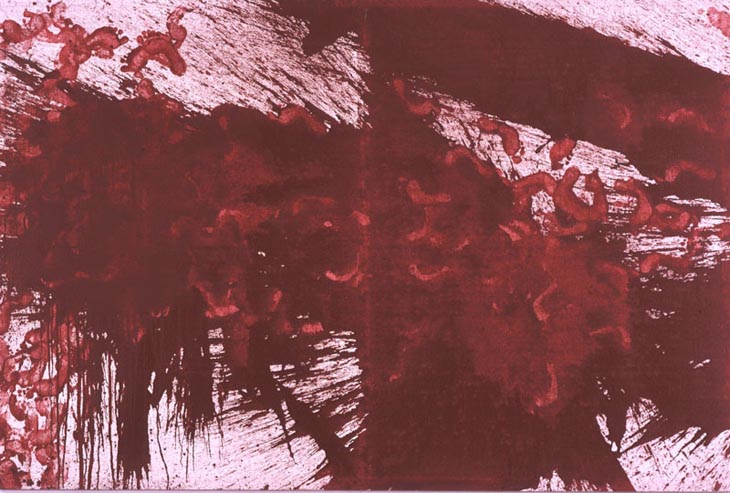 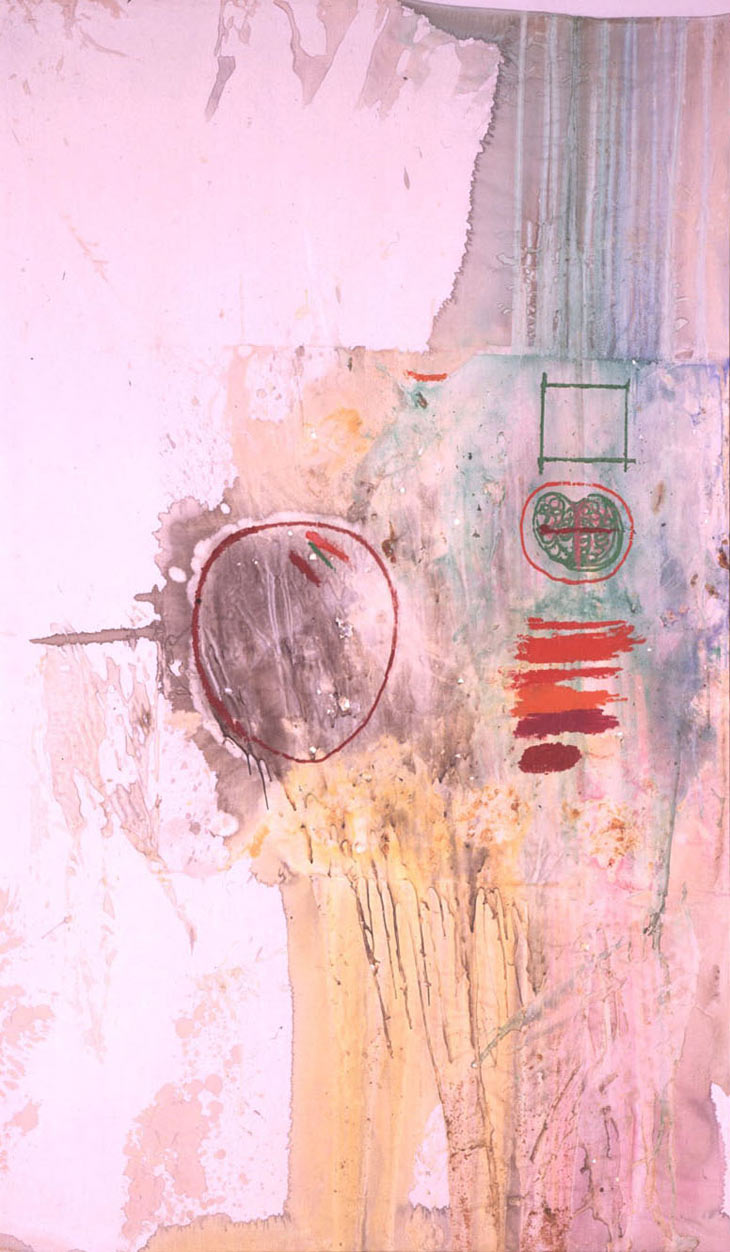 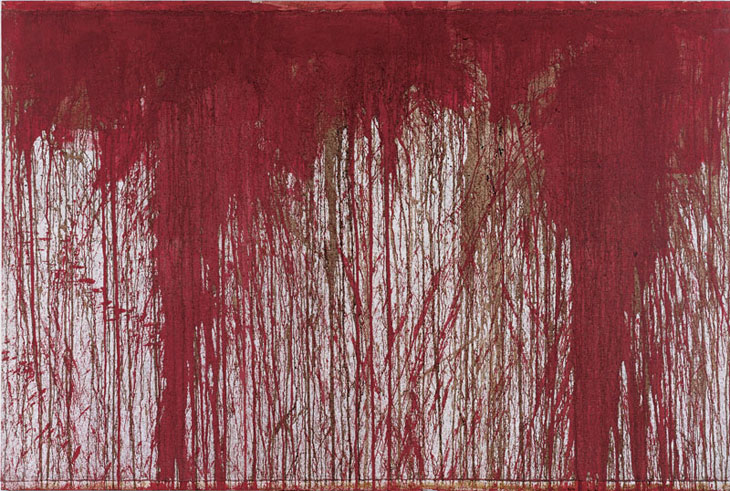 His Fresco, with its connotations of martyrdom and penance, is fixed with the tortured bust of a ’saint’, a site of devotional worship as horrifically compelling as an ossuary or catacomb.

Much is made of Hermann Nitsch as cult provocateur, but he is first and foremost an artist: his performances and rituals are painstakingly planned in the context and language of art. Each ’Aktion’ is premeditated through preparatory drawings and paintings, reflecting Hermann Nitsch’s influence by, and position within, the predominant movements spanning his career.

Hailed by many as the Pope of Viennese ’Aktionism’, Hermann Nitsch, together with Günter Brus, Otto Mühl, and Rudolf Schwartzkogler, reformed the face of sixties art, shunning the illusionary confines of traditional painting and sculpture, reinventing an art that exists in real, corporeal, and violent terms.

Hermann Nitsch was celebrated and reviled in equal measure as he took the semblance of a pagan ceremony and incorporated robed processions, symbolic crucifixion, drunken excess, nudity, animal sacrifice, the drinking of blood, and the ritualistic incorporation of viscera and entrails. Even today, his audiences aren’t mere visitors, but active participants in his artistic liturgies.

Hermann Nitsch’s work draws parallels between religion and the ritualistic spiritualism of creativity. Heavily entrenched in ancient philosophy and a dissident, questioning Christian theology, he actively seeks catharsis through pain and compassion, a rigorously disciplined quest for ethereal release and enlightenment through an embracing of primal instinct and ancient sacrament.

The blank canvases incorporated as backdrops to his performances are sometimes smeared in blood, while others are violently attacked with symbolic red and purple paint. In the gallery, Hermann Nitsch’s ’Splatter’ paintings exist as holy ’relics’: icons of metaphysical significance, radiating an aura of edification. They convey a terrible beauty, a sublime contemplation of life, violence, transgression and extremity.

In Golden Love, Hermann Nitsch presents a monumental collage. In his panel of bedazzling candy-coloured pop, images of babies sit alongside animal carcasses, flowers, and sexual perversion, in an unlikely remix reminiscent of Robert Rauschenberg’s combines. Borrowing from the geometric design of the era, Hermann Nitsch’s grid-like display lies somewhere between science textbook precision and the impassioned fervour of a religious zealot; pain and pleasure are united in a work which is the epitome of middle-class subversion and corrupted decadence.

Process is a visual dissection of a painting. Here Hermann Nitsch’s trademark gore is thinned to a rapturous rosy pink, both hopeful and grotty. Nitsch encloses his Masonic-esque symbols on their own separate plane, his element of collage both a quarantine from, and contamination of, the delicate surface below.

The Last Supper was a work Hermann Nitsch originally conceived and mounted at the French Cultural Centre in Milan. Based on Leonardo da Vinci’s famous fresco (housed in the same city), Hermann Nitsch’s performative response was finalised as an installation consisting of a table, surrounded by twelve pictures, and a large canvas symbolic of Christ.

In this drawing, Hermann Nitsch works through his conception of the Christian story of betrayal, repentance, and forgiveness. Depicting each figure as an anatomical diagram, he plays on the concept of the Eucharist: spiritual cleansing through the eating of blood and flesh.

The Christ figure in the centre is rendered in red as an emanating energy force; neither good nor evil, his face is a skull-like mask bearing the inane mischievous grin of a Mona Lisa smile.