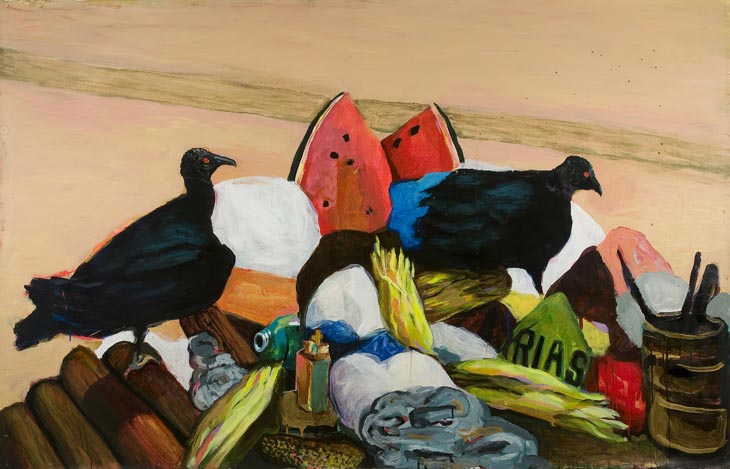 New York-based painter Karen Heagle’s The End of Abundance brings together a variety of characteristically autobiographical symbols: a jar of paint brushes, a discarded tube of green paint, even a tiny trophy (‘Most Christian Girl Award’) the artist was awarded on graduation from her Catholic high school. For Heagle, the detritus of the past is to be picked through, collated or discarded; to that end, she often uses the image of a vulture as a proxy self-portrait, the cold-eyed sifter through the trash of personal history. Here, though, the painting’s title, suggesting a finger-wagging moral allegory of the seventeenth century, gives the painting an unplanned societal resonance. Made in the months leading up to the collapse of the US economy, its end of- days associations are drawn into sharper focus: might those vultures take on a more sinister aspect in that light? Regardless of its economic prescience, though, Heagle’s painting is really about the tools of creativity itself: the mountain of collected experiences – here embodied in watermelon slices, plastic bags, logs – through which every artist has to sort to generate an expressive language. The visual echoes in the painting (each patch of colour its own small peak in an ascension of forms) are that language making itself heard.