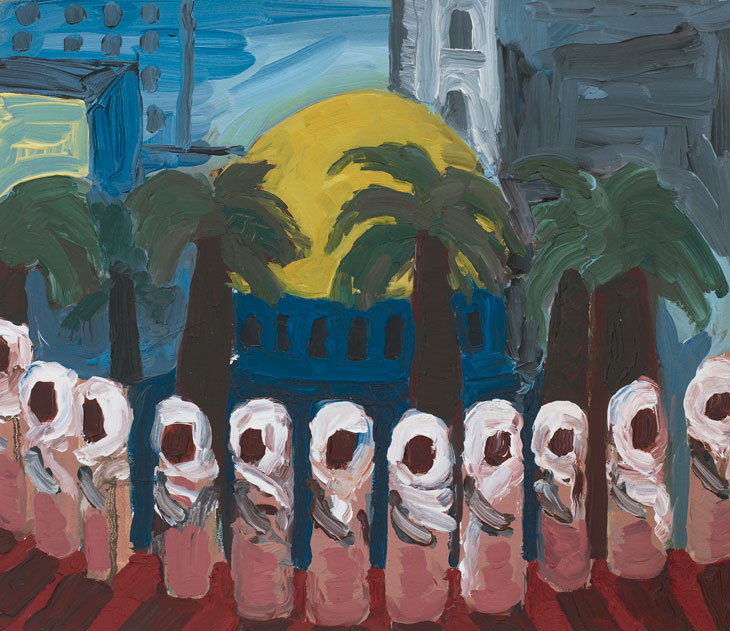 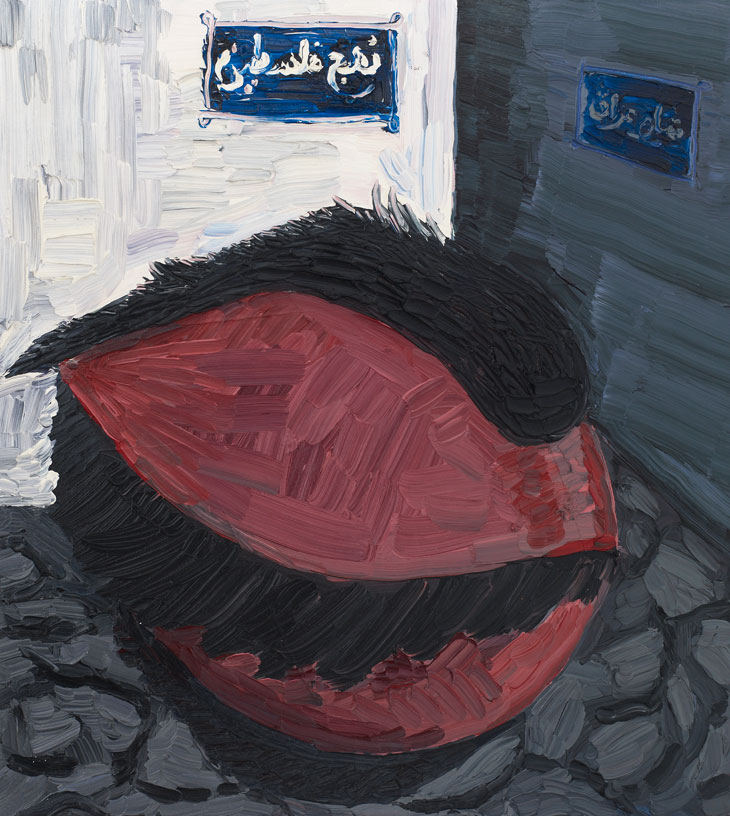 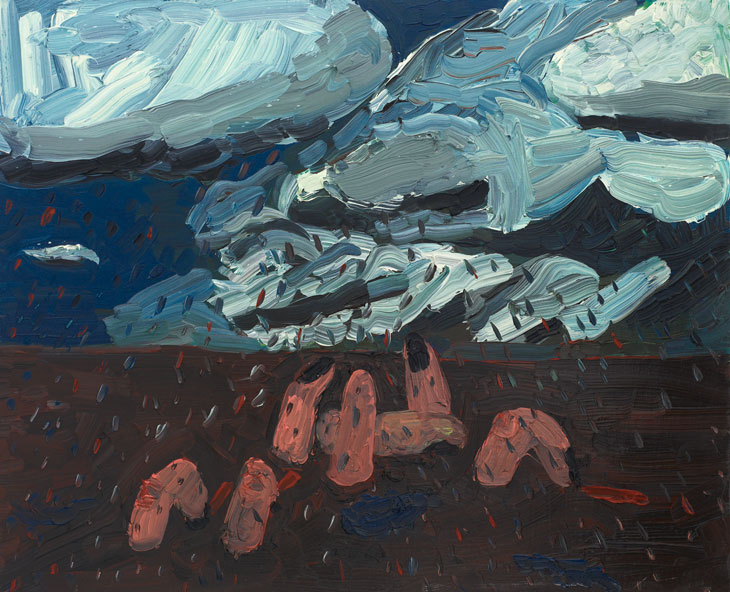 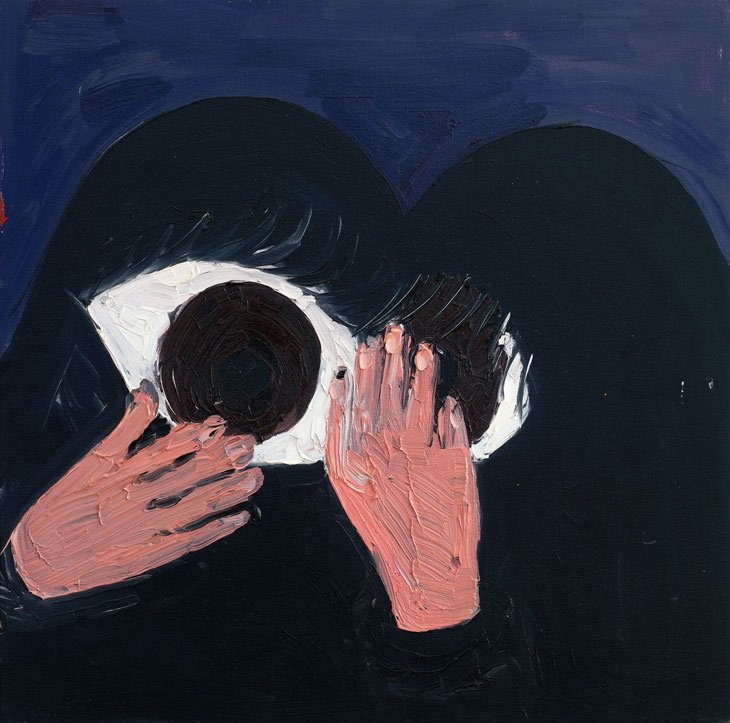 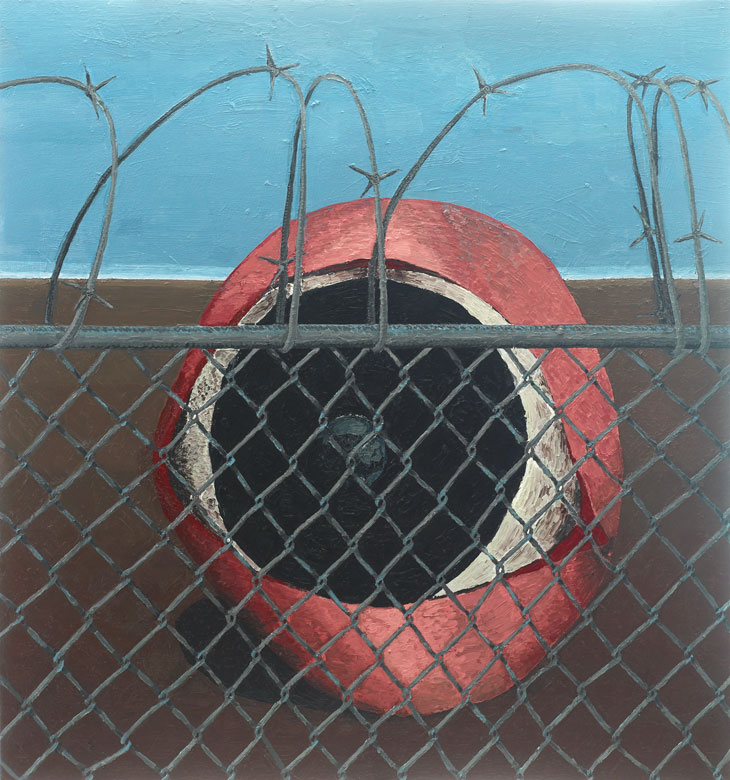 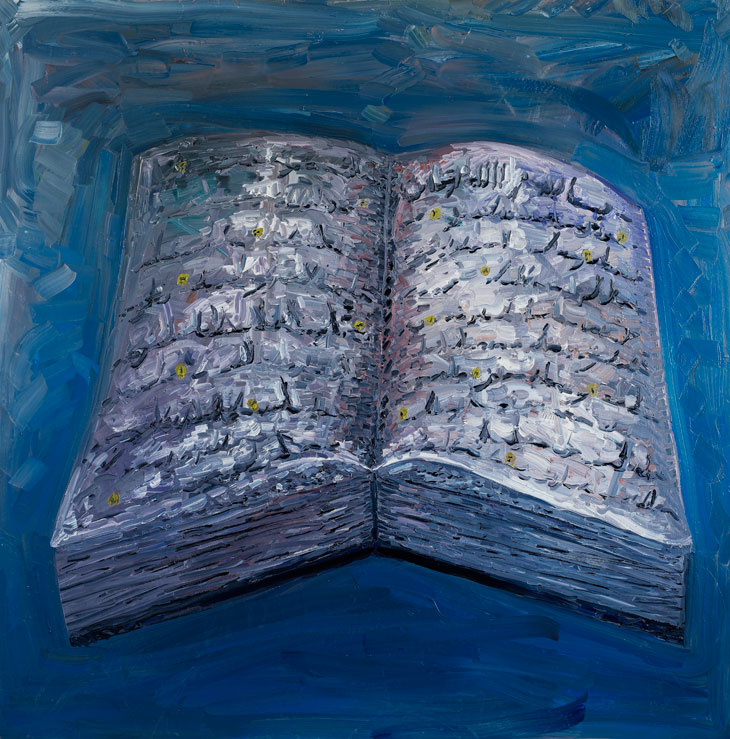 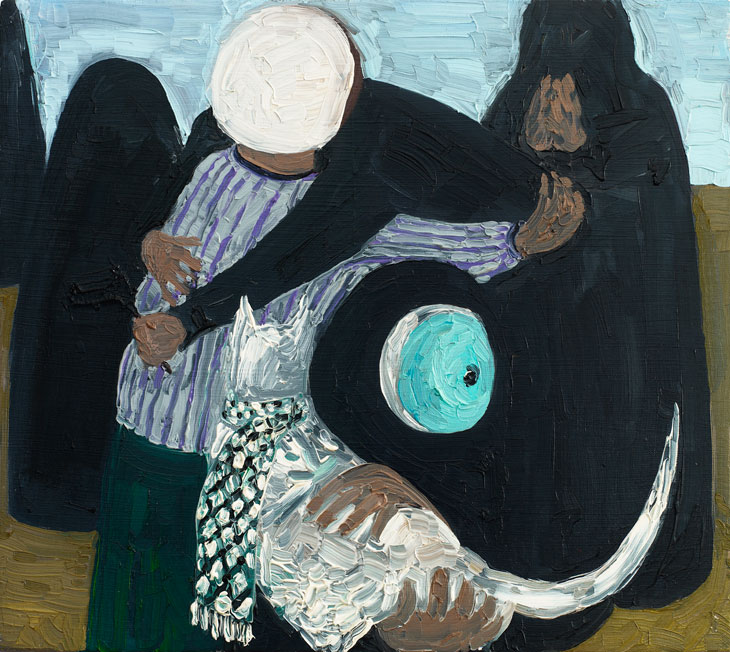 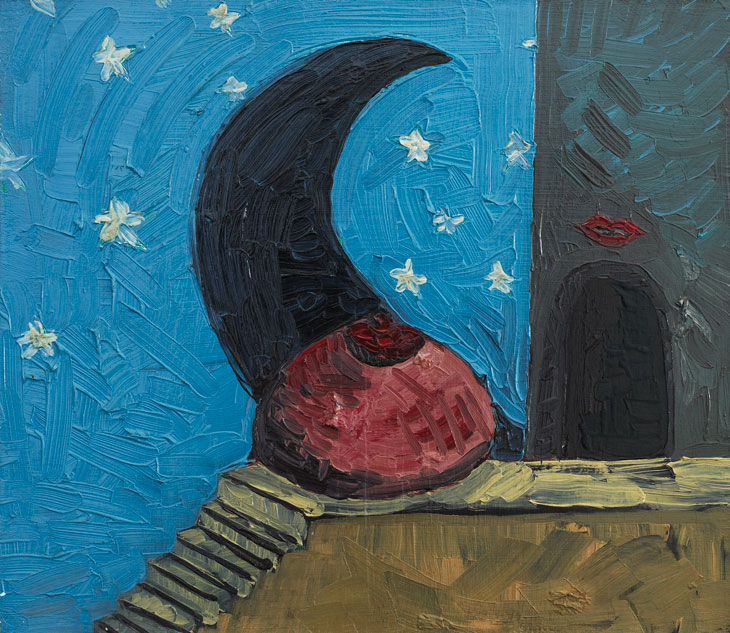 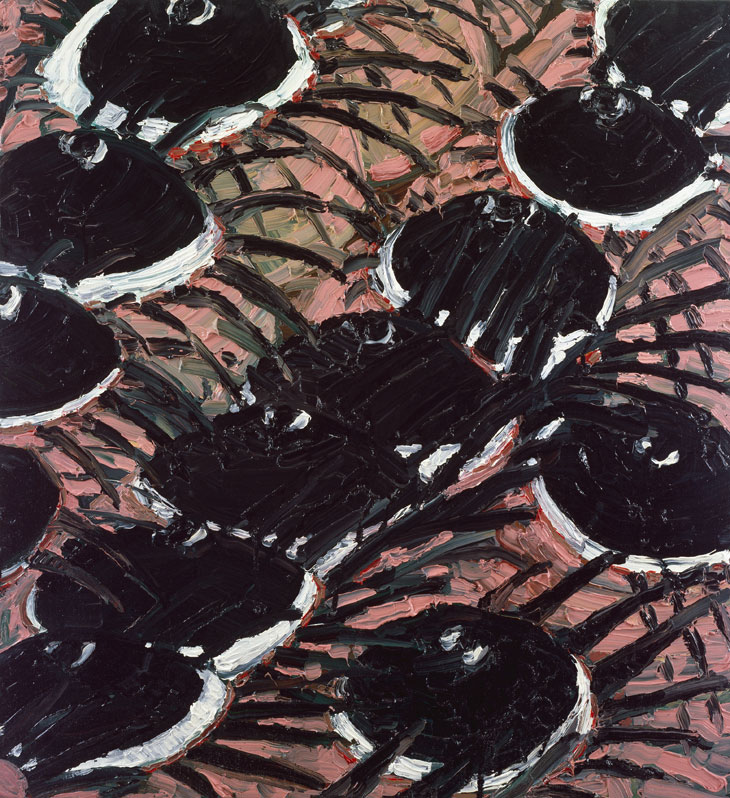 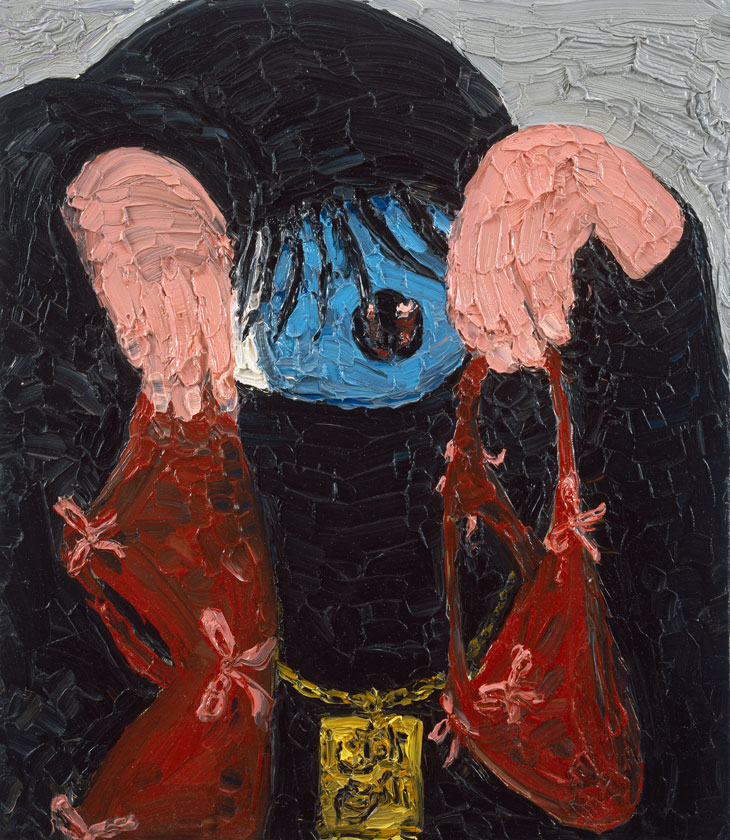 Raised in Tunisia, Ayari didn’t start working with her Middle Eastern subject matter until she’d moved to America and notions of cultural heritage and identity came to the fore. She describes her practice as an awakening of self-consciousness. SidiBou takes its name from Sidi Bou Said, a popular tourist destination in northern Tunisia renowned for its blue and white buildings and cobbled streets. In Ayari’s work, the eye doubles as an ’I’, a personified all-seeing entity, anonymous witness, portrayal of cognitive perception. In SidiBou, the eyeball is closed, a pink fleshy mass bearing the punk Mohawk stripes of eyebrows or lashes. The street signs in the background read: "Avenue Iraq" and "Palestine Street".

For Ayari, who grew up in the religiously tolerant culture of Tunisia, the burka is less a politicised issue than a source of fascination; she acknowledges its suppressive role within patriarchal societies, but also views it as an enviable means of ‘disappearing’, its anonymity providing a sense of comfort and empowerment. In WshhWshh, two women are shrouded in a flat black mass, thinly painted to be flush with the picture plane. Their faces transformed into giant eyes, they are not seen, but observe everything. Ayari illustrates them sharing a secret, heightening the mysteries surrounding the veil.

Giving her disembodied oculi a sense of agency or personhood, Ayari often animates their appearance with attributes such as eyelashes or clothing; in The Fence, her lash-less eyeball is rendered as naked and vulnerable, imprisoned within a refugee camp. Ayari’s tension between narrative and abstraction is exemplified in this painting as her statement about human rights concerns becomes encoded in a formal approach to composition and markmaking. The simplified geometric patterns created by the central circle, the evil-eye shape, and chain-link fence are inspired in part by Arabic calligraphy as well as traditional Tunisian ceramic painting.

The Book takes the Quran as its subject, and its square-in-square composition is deceptively complex. Referencing Malevich’s supremacist design which approached abstraction as an embodiment of pure emotion, Ayari attempts to translate the sanctity of religious doctrine and experience, to understand its meanings by manifesting its form in the physical medium of paint. Rendered in grand scale, size is used to denote the scripture’s importance. Ayari, who does not consider herself to be religious, allowed herself to be directed through an intuitive response to her subject when making this work, her gestures informed by childhood memory and rediscovery of the values of prayer and ritual.

Ayari usually works in small scale, a process which allows her to complete her paintings in one or two days and retain an intensity of concept and energy. Through her absurd scenarios she develops an intricately woven and constantly extending narrative that underpins and contextualises her practice as whole; each painting operates as a scene from her ongoing story. Right Of Return is one of the original images from which her other paintings have developed: imagining the release of a group of Palestinian prisoners from an Israeli jail, as witnessed by a little girl who will grow up to become a suicide bomber. For Ayari, authoring these fictive scenarios is a way of personalising the abstract nature of geo-politics and gaining a more intimate understanding of how global conflict affects each of us as individuals.

Ayari’s paintings offer a stranger than fiction response to some of the most controversial issues surrounding the Islamic world. Her ability to present highly provocative ideas in an endearing and sensitive way is facilitated by her use of paint: through images she can suggest things which would be outrageous to say otherwise. Her canvases are terrains where quick comic wit is tempered by a profound engagement with painting’s history and practice, citing influences as diverse as folk art, abstract expressionism, and Arabic artifacts and hand-crafts. In Hive, Ayari’s eyeballs line up in militaristic fashion, like interlocking landmines or giant insects,
imposing a perverse conformity through their suggested violence.

Informed by a news story about the burgeoning Syrian undergarment industry, Syrian Dream broaches the dichotomies of the expected roles of women within Islamic culture. Within the Quran, a healthy approach to sex is encouraged and mutual satisfaction of married partners is held sacrosanct. Donning sexy lingerie beneath chadors is an increasing practice, and in Syria this trend has been further popularised through the sale of high-tech knickers which incorporate elaborate light and sound effects through electronic chips stitched into the lining; some even come with remote control. Through her hilarious rendition of a burka-clad Cyclops eying up a pair of raunchy smalls, Ayari’s shrewd parody re-evaluates the contradictory mores which simultaneously encourage women’s public chastity and private lasciviousness. The Holy Quran pendant around the woman’s neck is a symbol of religious observance, which ironically is one of the key marketing strategies used by Syrian undie-mongers.
×