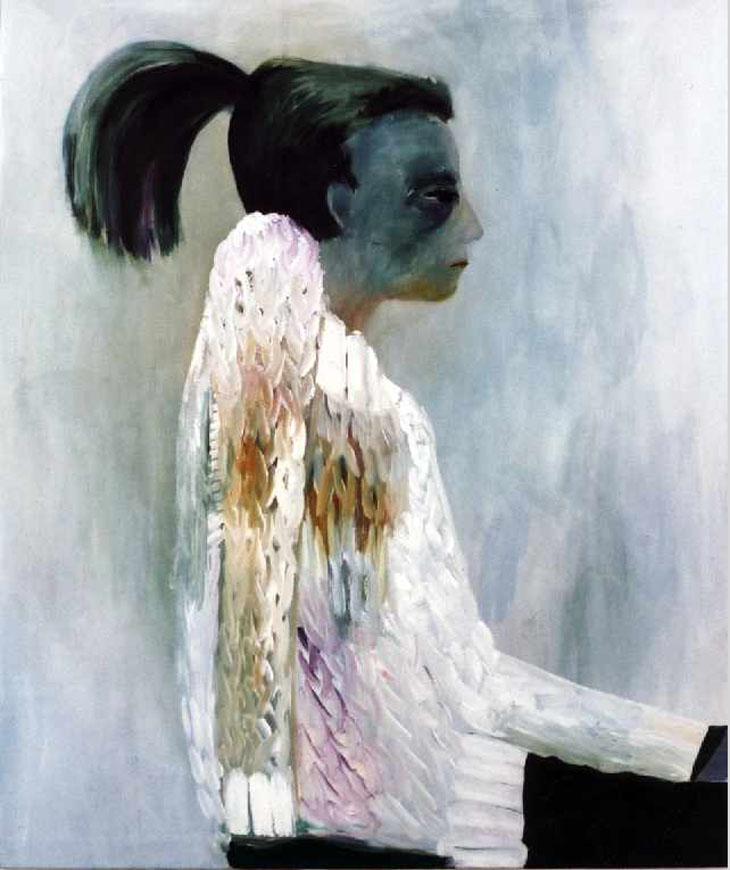 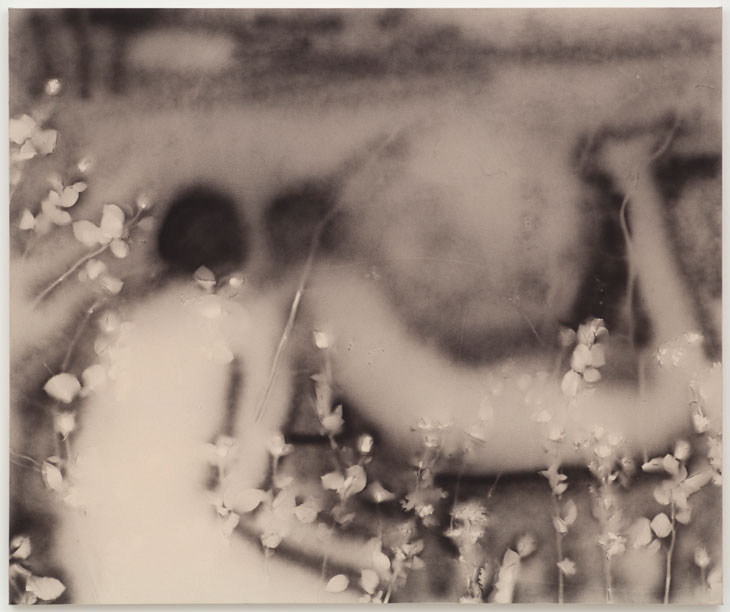 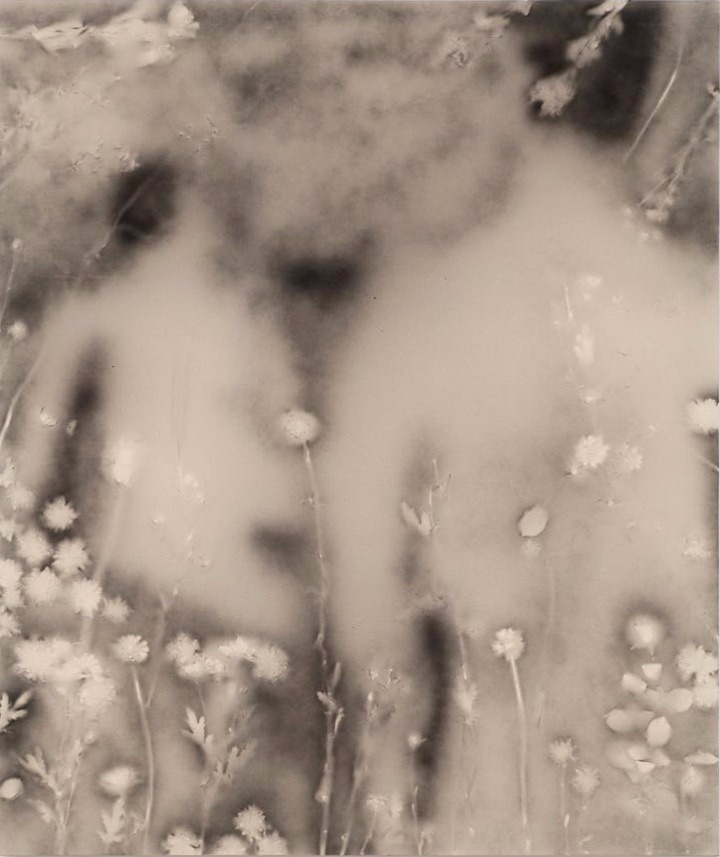 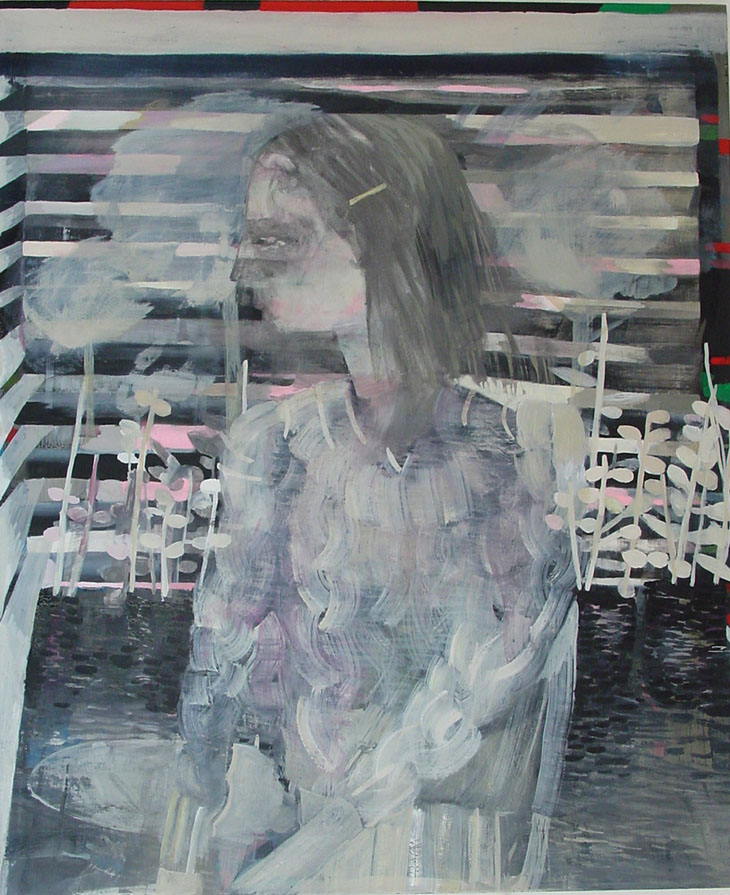 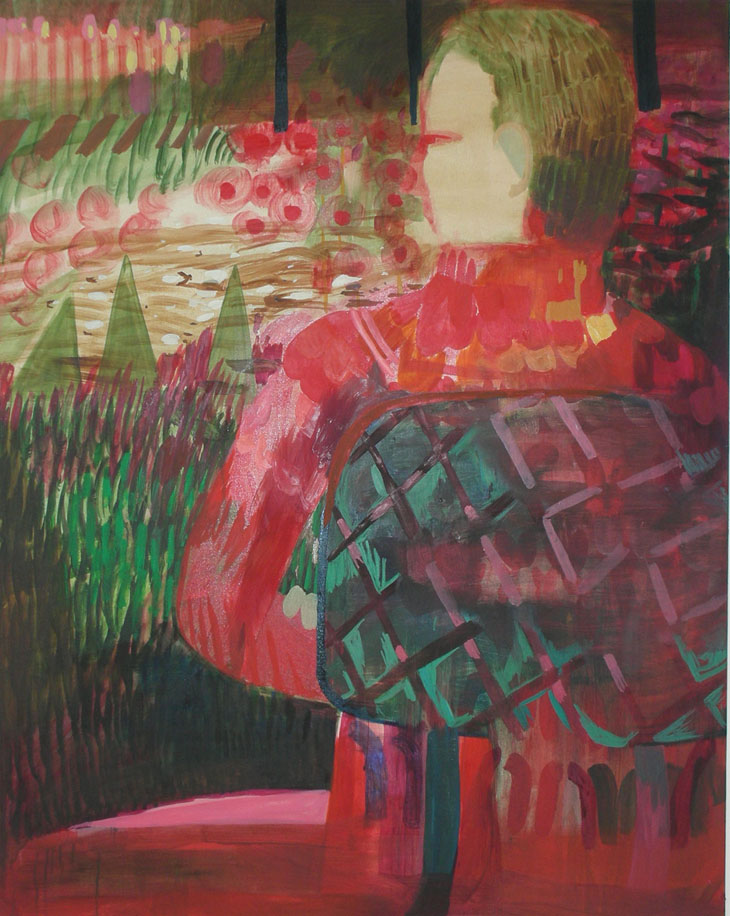 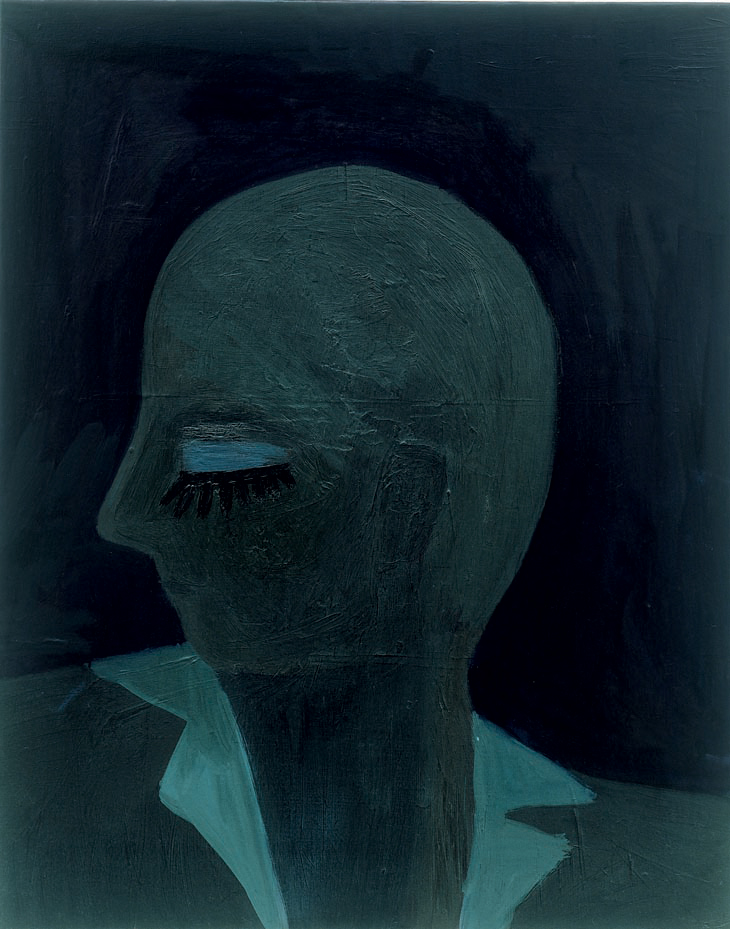 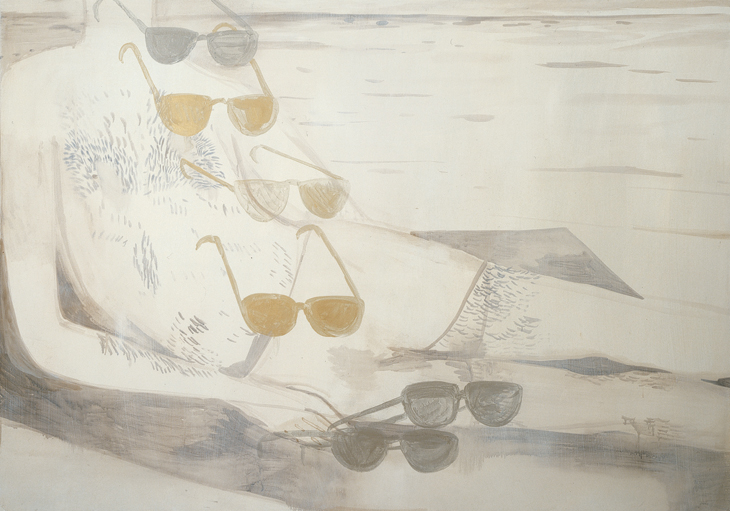 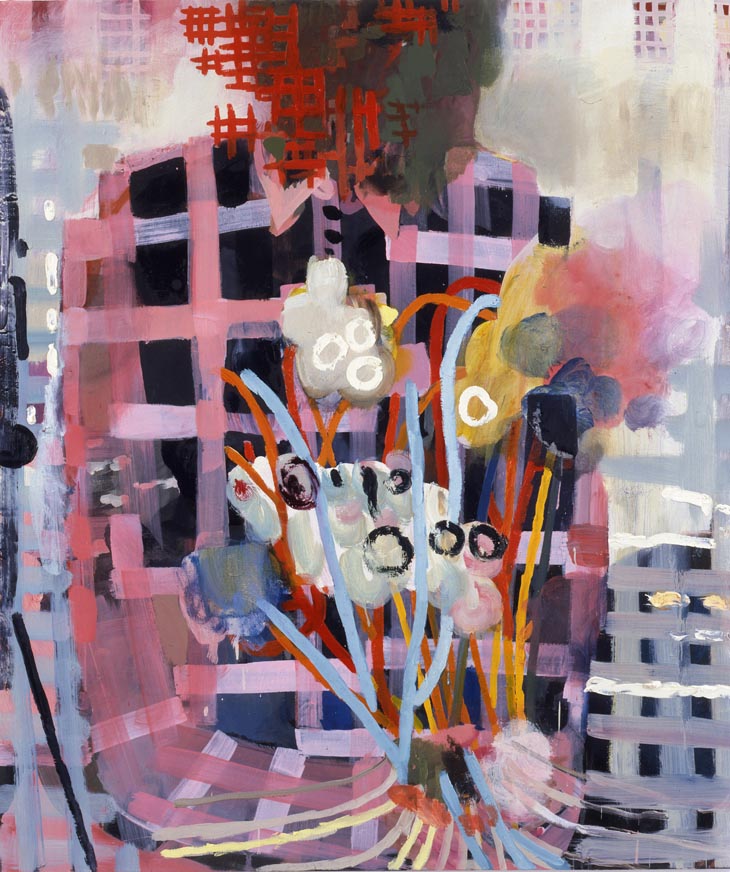 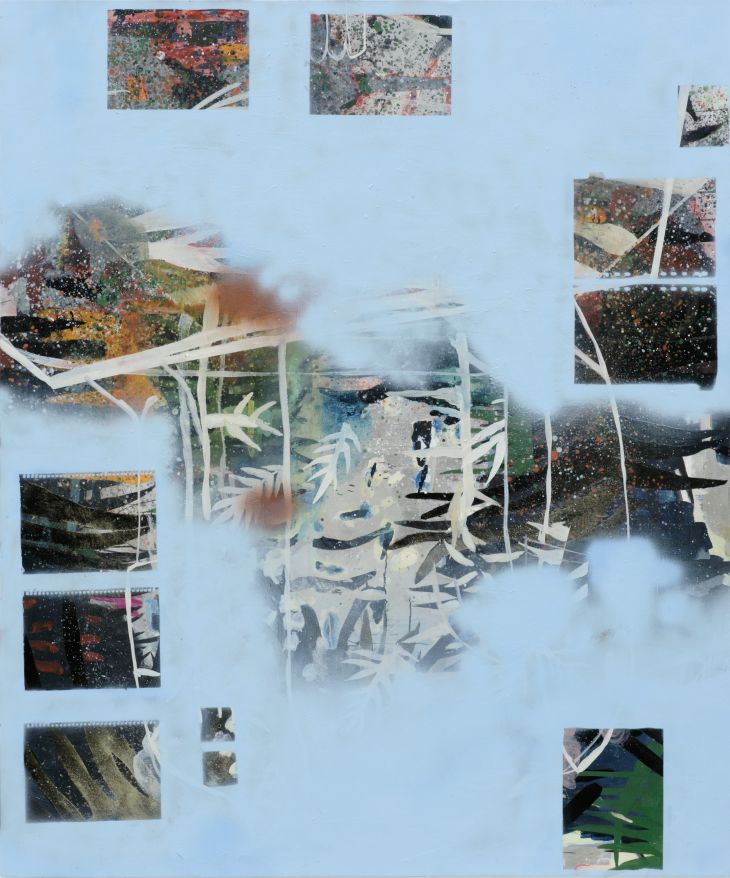 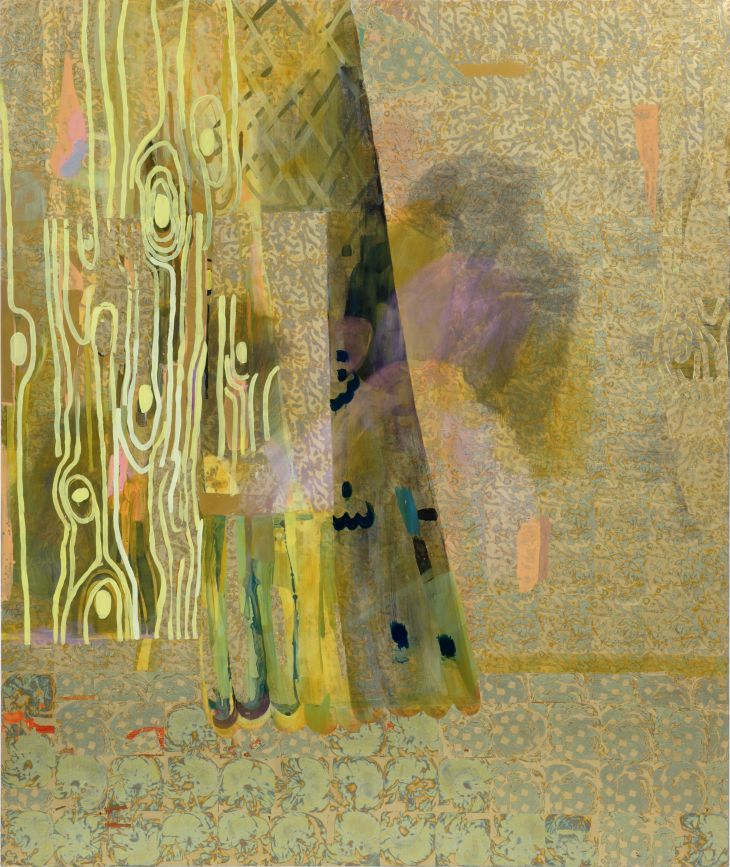 “This painting explores a certain tension and mood manifest through a girl in profile: the uncomfortable leaning on one arm, the sculpture-like rigidity and the palette of blues, whites and purples”, Unwin says of Girl. “The subject has what might be thought of as particularly girlish attributes, but in this painting I wanted the ‘girlishness’ to become rigid and tense: the high-up ponytail looks almost solid and a strange ‘thing’ rather than something soft and fluffy. Her knitted jumper appears to be a structure both containing her body and stiffly holding it together. She is nobody in particular: more a combination of things seen and felt. I chose to make her in a limited palette as I wanted the painting to focus on what she might be feeling, with the aim of creating a pensive atmosphere. She is not confrontational and I don’t think of her as any kind of ‘character’. I don’t think she is a whole being herself, rather a kind of sculpture of feeling.”

“This painting marks a moment where I became increasingly interested in how the image of a figure might relate to its environment and vice versa – the two becoming one. The subject itself encourages a certain merging: the figure of a girl bathed in strips of light from a venetian blind,” Unwin says of Untitled. “I had in mind how when strong light cuts through a room it can appear almost as if it divides anything in front of it. Here I was particularly interested in how the coming together of person and place could be explored through the materials themselves. I like the idea of a feeling being translated quite physically. I have used quite opaque paints for the light - acrylic and oil - whereas for the majority of the figure I have used powdered graphite – making some soft and translucent marks. I was thinking about the structure of the blind being very solid and still, the light being so strong it has almost become ‘stuff’ and the figure being relatively transient and delicately, gently moving.”

View compounds ideas about perception with an image of a man gazing at a something in the distance that’s left to the viewer’s imagination. Rendered in the green and red tones of 3D cinema, View takes on the qualities of film with the suggestion of narrative, movement, and casual voyeurism. The figure in the canvas is near life sized, a device which annexes the surrounding environment as part of the painting. “I often aim for my paintings to feel as if there is a possibility of the picture extending beyond its edge.” Unwin states. “I painted the man pushed up to the right-hand edge of the picture so that he is almost leaning on it. I like it if the shape of a canvas can almost become part of the image.”

“One of the most important things to say about this painting is that it is small in relation to my other paintings here”, Unwin says. “It is between A4 and A3 size. I point this out because I tend to change the scale of my work depending on the subject. I find the physical relationship a viewer has to a painting is a significant factor. Night Life is a head that is almost human size and I think it is this that makes it feel quite intimate and, I hope, have some kind of human presence; encouraging an intimate visual conversation for the viewer. I think that if this painting were big it would become more of an image of a head, like the distanced and powerful feeling of a billboard picture. The blues of this oil painting are so deep they are almost black. The mood and the head are one. This is a painting of no one in particular and I like to think that the gender is indeterminate too- it is a person barely visible in the dark.”

“I find it exciting to think that anything can be in a painting: a valuable subject need not be a grand idea, an especially significant moment, a pose or an accurate documentation,” Unwin says. “In Falling Sunglasses, I was excited by the challenge of how I might visually explain movement, heat, light, casualness and a moment of lying down but about to get up. The sunglasses are repeated, as a film is constructed, and the lenses are not black as you might expect: some are completely gold, others silver – its more about how glasses glitter in strong light. It also felt crucial that the man’s head is not depicted, since the painting is about the moment of dropping glasses rather than a personality. I wanted to communicate the energy and atmosphere of those fragmented and horizontal views one can have whilst on a beach, half looking up from lying on a towel. The painting as a whole is monochrome to give the falling sunglasses attention and focus rather than bringing in unnecessary information about the surroundings.”

“Here the oil paint is layered and impasto,” Unwin explains. “The man’s body, the flowers, the gingham shirt and background are becoming interchangeable open forms. I liked the idea of painting a gift and that gift coming from, and almost out of, the person. I’m interested in those moments where objects feel they become part of us for some time, either because they are functional or because we have feelings about them. I believe I was thinking about the flowers almost growing from the man, and that there is a celebratory but also slightly pushy feeling about the flowers – I was interested in how this can be explored in paint.”

Of Desk Unwin says: “This painting is of a desk viewed from above. I wanted to make the shape and size of the canvas part of the subject of the painting. The A4 paper and folder silhouettes are arranged around the edges of the painting, making the painting itself operate as a desk in scale and composition. In this arrangement I was interested in the combined connotations of the everyday, design and abstract painting. The blue spray paint has an industrial feel to it and an energy of quickness and irreverence, compared with the layers of painted marks and silver leaf built up below. One of the primary reasons I am interested in working with different materials is that they have different colour characteristics. A cerulean blue in acrylic will be quite different from that blue in oil, and then different again in spray-paint. One paint may have more modern qualities, another may have a poetic feel. For me, colour is never a totally isolated abstract thing – its physical qualities make me think of objects, feelings, people or places.”

“Here person and place are almost indistinguishable. I had in mind how soft human bodies compare with the hardness of buildings,” Unwin says. Exploring the physical and psychological, she works from both memory and observation: “I don’t work from photographs – for me photographs provide too much information; too many details. I often aim to get to the essence of a subject, going on a hunch that there is more to that familiar moment or thing than itself. How colours work with form, scale and subject fascinates me; tension that materials can create. It’s important that the paintings are not scaled up from smaller images. I never know how a painting will look when it’s finished and I consider this a vital means of giving a painting energy. Memory is a useful filter for me because it’s never an isolated phenomenon: it’s not just about what something looked like but also what it felt like, how big I felt in relation to it, its temperature or environment - painting the feeling of something rather than its appearance. I paint things I have experienced in some way.”