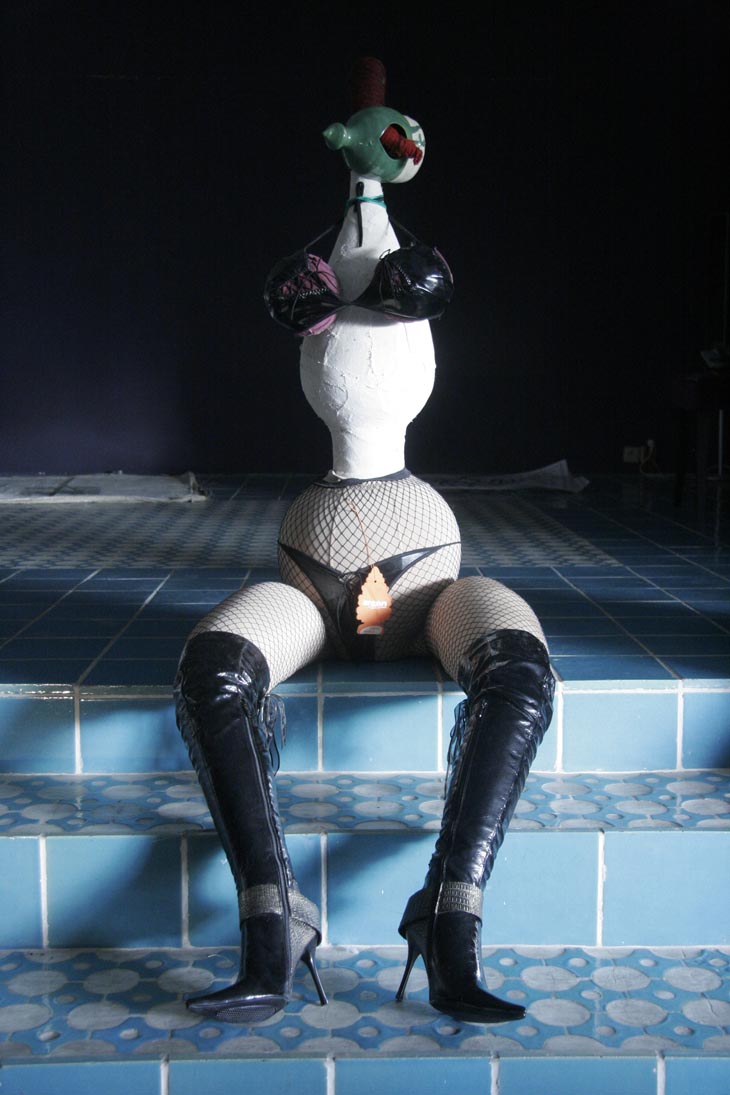 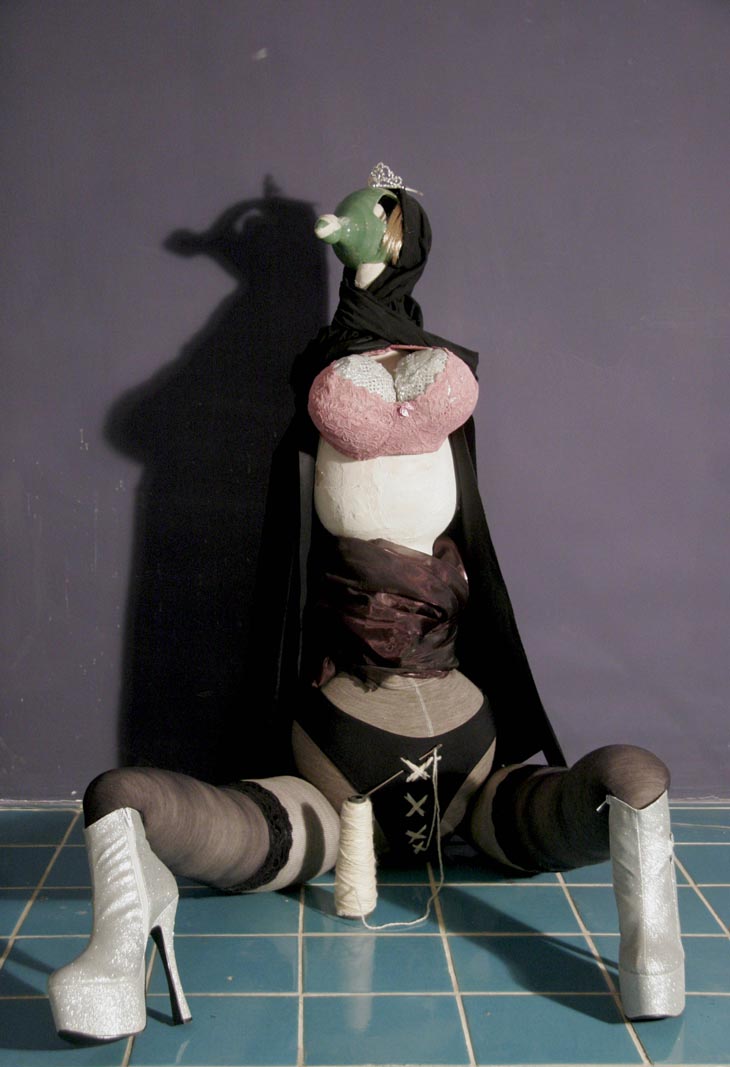 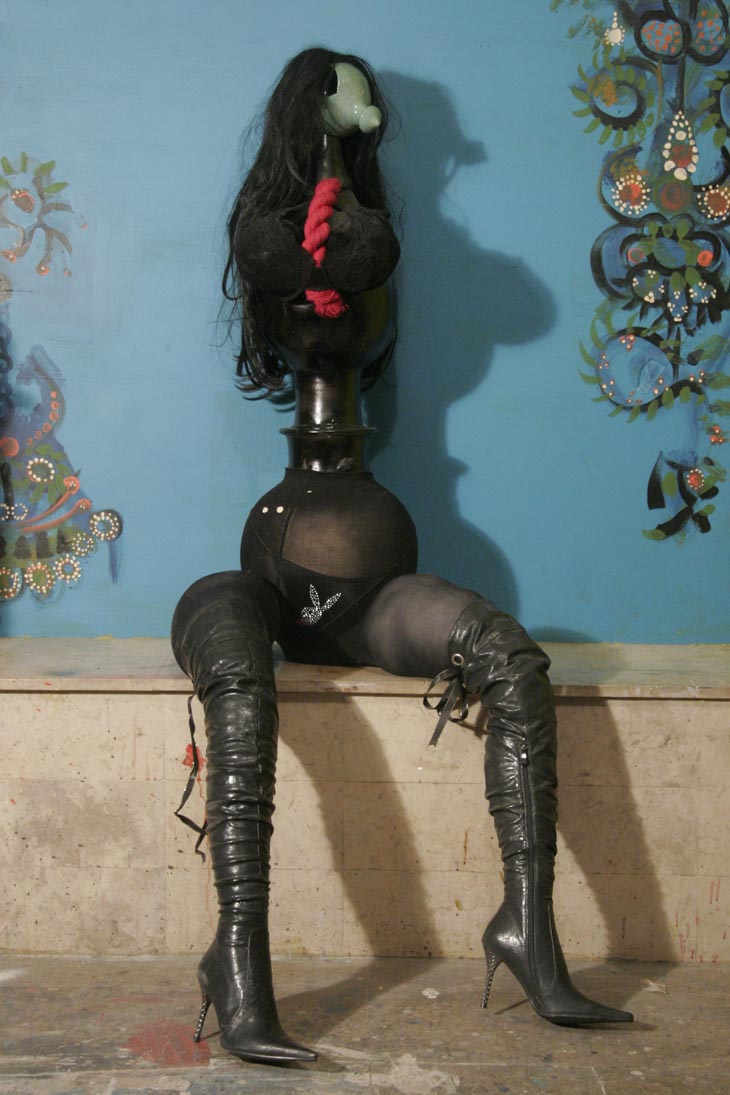 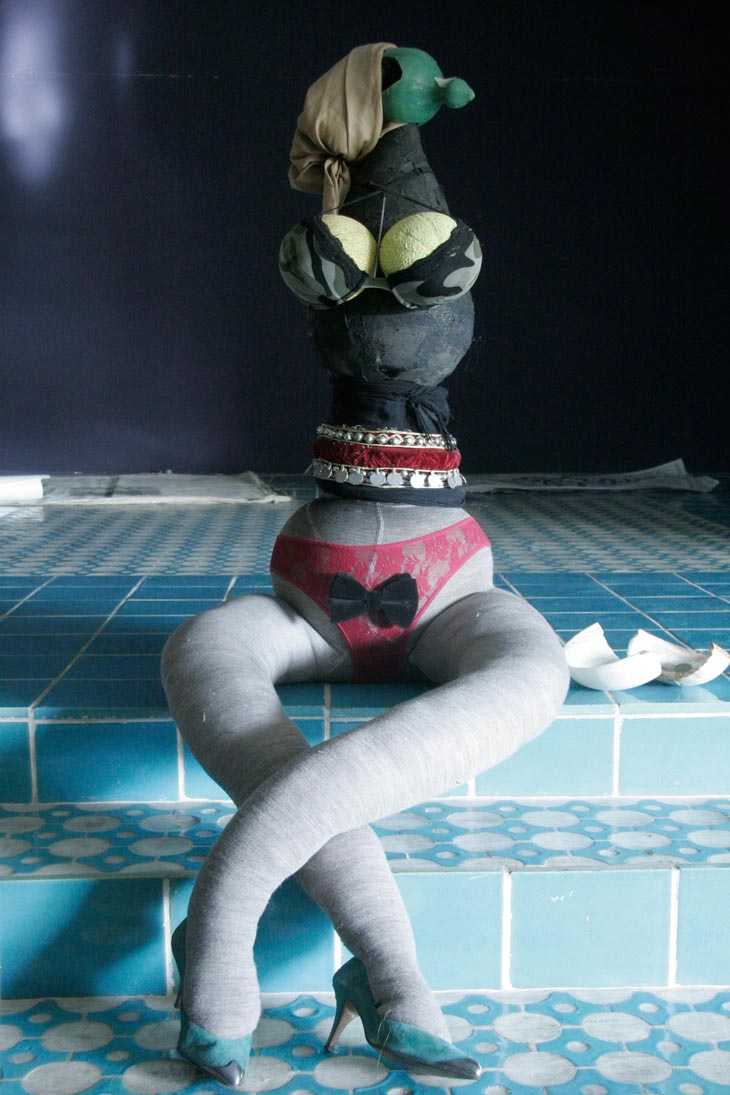 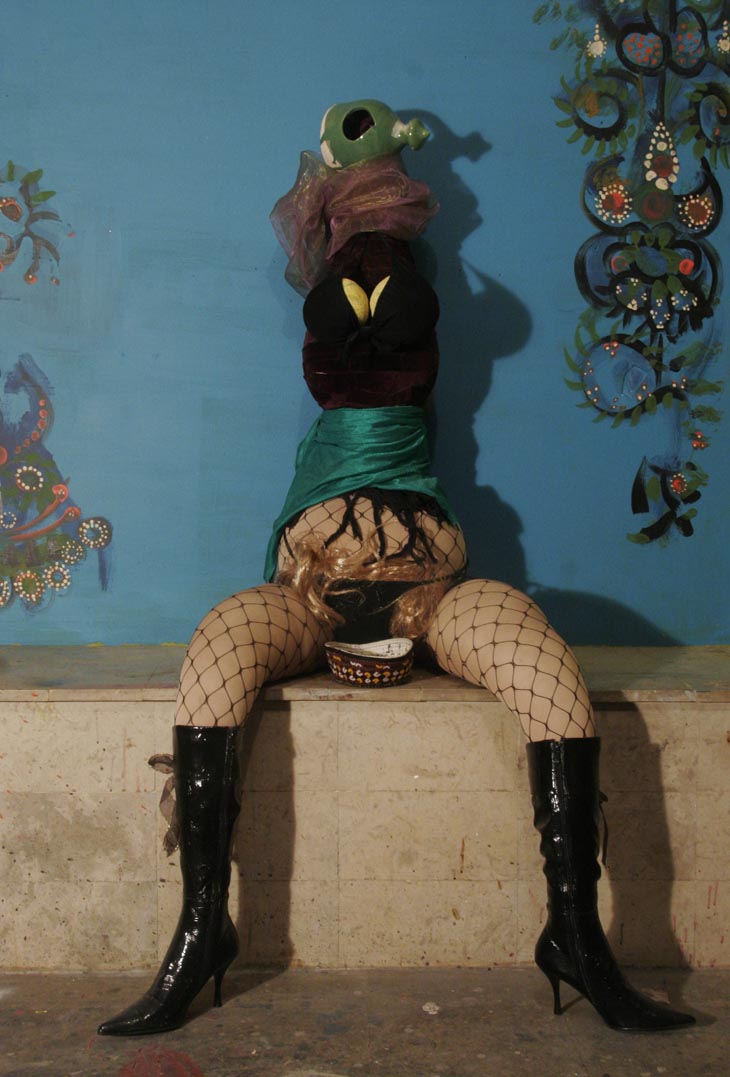 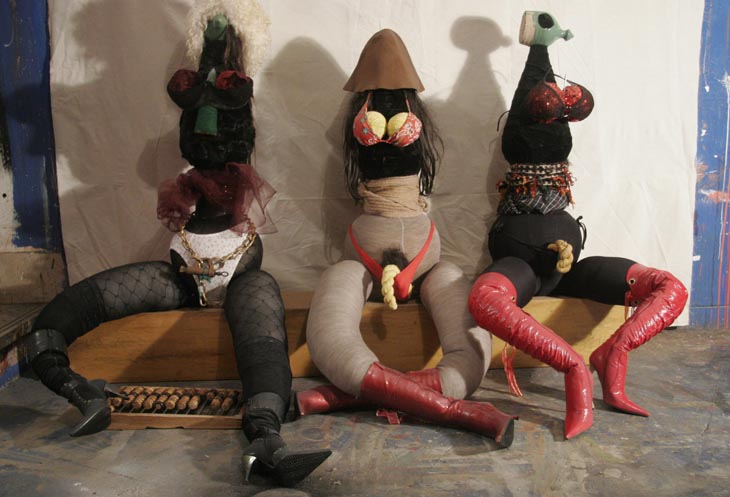 Shirin Fakhim’s Tehran Prostitutes uses absurd and sympathetic humour to address issues surrounding the Persian working-girl circuit. In 2002 it was estimated that there were 100,000 prostitutes working in Tehran, despite Iran’s international reputation as a moralistic country with especially high standards placed on women. Many of these women are driven to prostitution because of abusive domestic situations and the poverty incurred from the massive loss of men during the war; in response to Iran’s strict religious laws, some even consider the profession as an act of civil protest.

Fakhim’s sculptures play on the duplicitous perceptions of streetwalkers, highlighting the hypocrisy surrounding the sex industry. Made from found materials, her assemblages are grotesque configurations, exaggerating rough-trade stereotypes of wig-wearing, melon-chested slappers contortedly stuffed into ill-fitting lingerie (in reality Tehran vice-girls wear hijabs and are identifiable through more covert and subtle signals). Fakhim farcically combines westernized hooker fashion with the codes of Islamic demur, torsos and heads made from cooking implements, adorned with make-shift veils and chastity belts.

Using ordinary objects and items of clothing, Fakhim exaggerates the less than flattering associations of floozy hygiene, her readymade materials driving home the punch lines of rude jokes. Blond wigs shoved down pants make for Sasquatch bikini lines, wayward bits of rope reveal pre-op transsexuals, and a carefully placed abacus reads more like a send up than evidence of financial acumen. Fakhim ironically stages this menagerie as a source of ridicule, provocatively placing items such as alms baskets and air fresheners to illustrate public scorn and social stigma.

Fakhim’s ladies of the night approach the naked body as a source of taboo. The discomfort of looking at them is displaced through a purile, intolerant, and scapegoat humour, revealing more about public attitudes and ignorance than about prostitutes themselves. Issues such as female genital mutilation, transgender orientation, homosexuality and cross dressing are all awkwardly broached through her vulgar approximations of stitched up crotches and mis-matched private bits, confusing the brutal, illicit, forbidden and desirous.

Fakhim’s life sized sculptures, Tehran Prostitutes, are strangely totemic, connoting a certain black-market power and ritual in their reference to the early 20th century fashion of ‘primitivism’. With hour-glass figures formed from portable stoves and adorned with cheap market-stall wares, Fakhim’s assemblages point to a commodification of necessity, their make-shift charm belied by associations to poverty, domestic violence, economic migration and human trafficking.

Approaching sculpture as an intrinsically tactile activity, Fakhim chooses her materials with a playful sensitivity. Crafted from the female stuff of fabric, clothing, and kitchen apparatus, her sculptures temper benign domesticity with a bawdy coarseness, creating a vaudevillian humour from over-stretched stockings, sickly green terrine masks, and exaggeratedly padded brassieres. Hardy practical tools such as stoves and pots create a physical contrast to the fussy adornments of lace and garters, creating an image of sexual prowess that’s conspicuously ill-fitting, painful, and tragic.