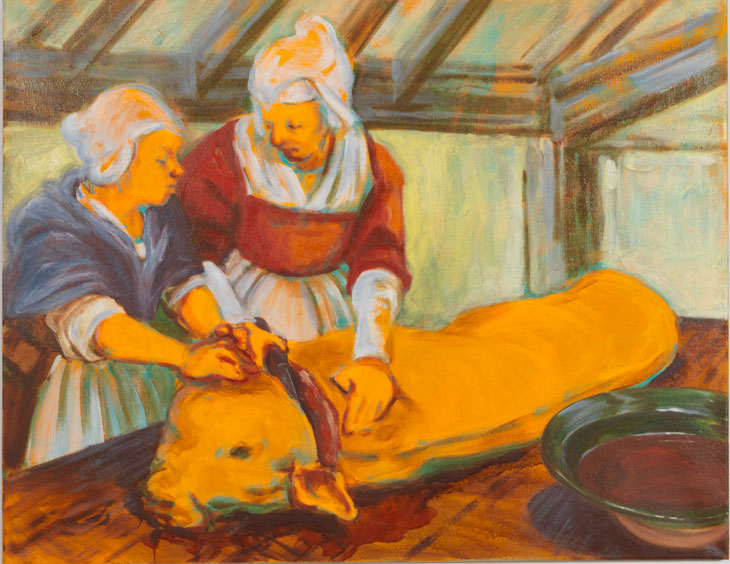 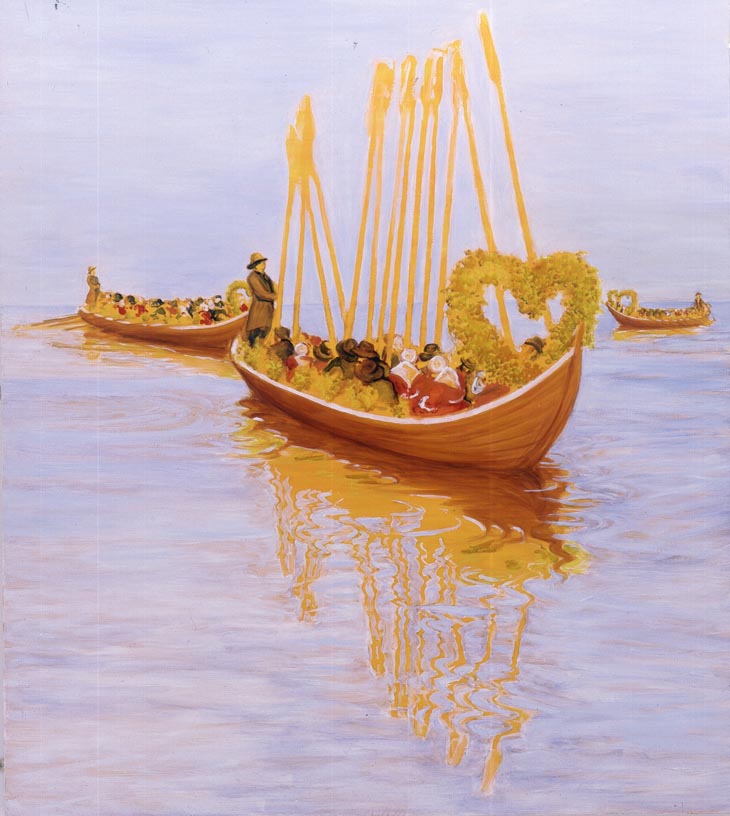 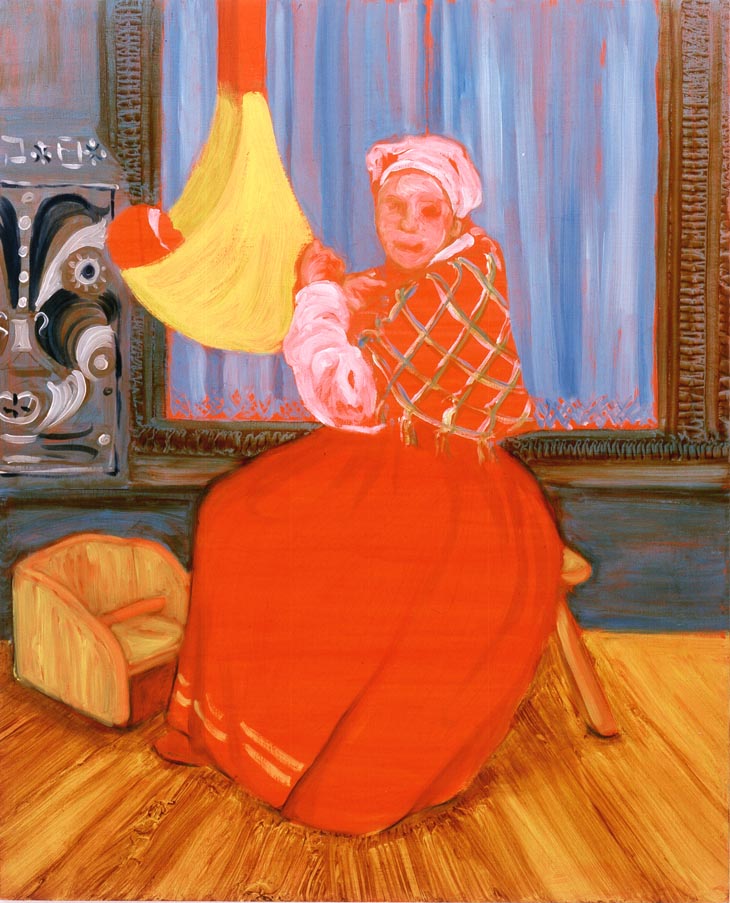 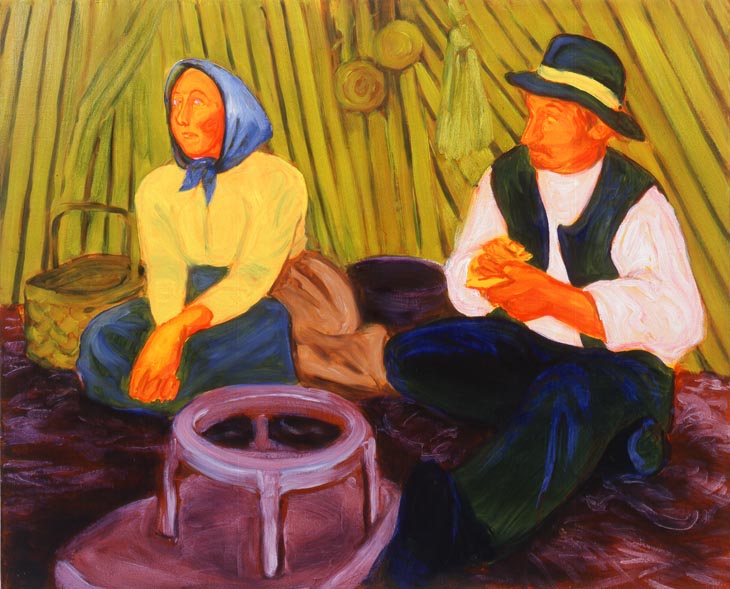 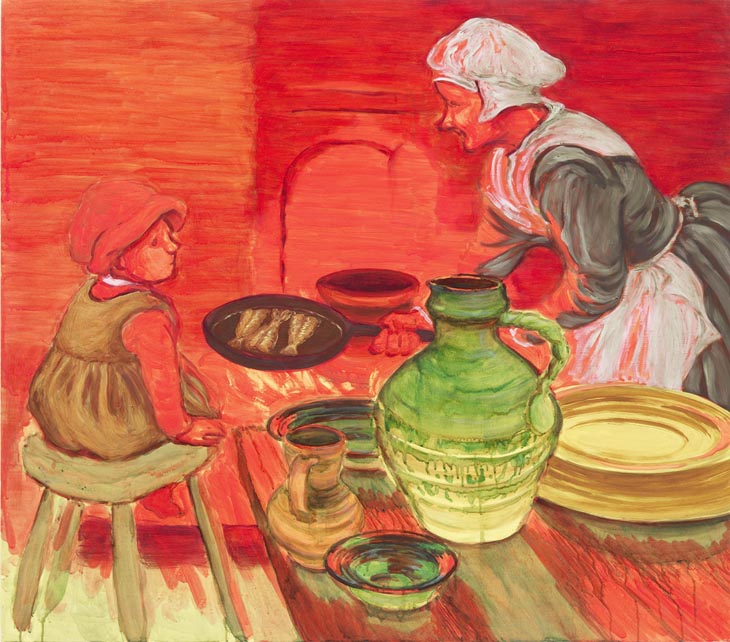 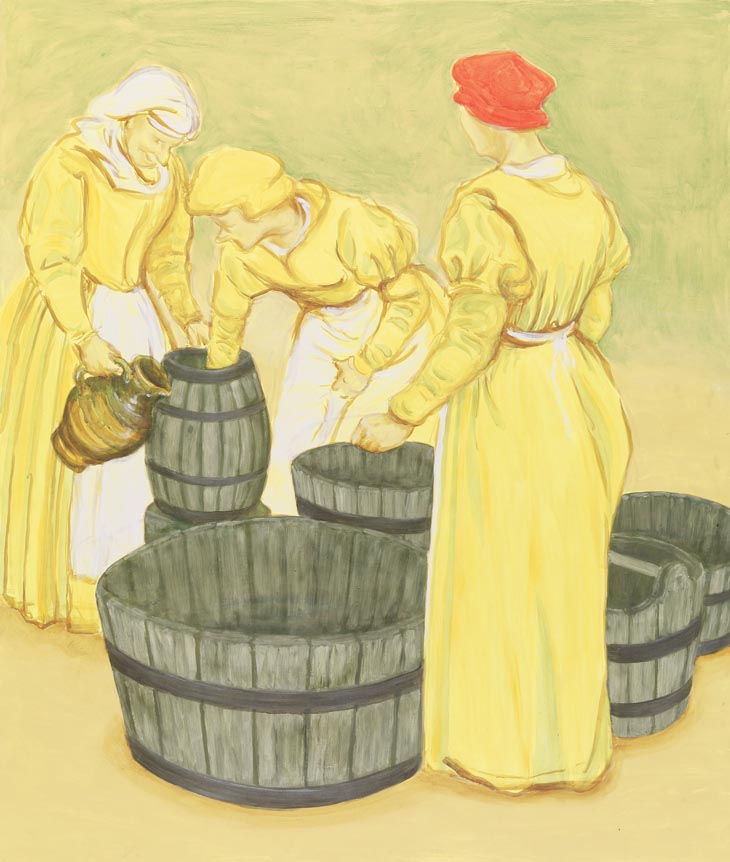 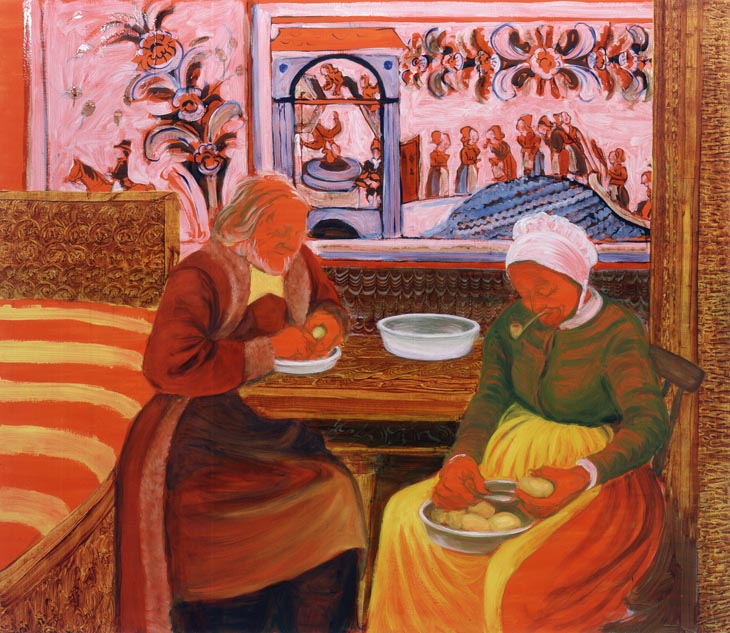 Sigrid Holmwood’s unique approach to painting is most vivid in its use of colour. Neon tones garishly clash with her subject matter of historical reenactments of vanished traditional life, and museum workers in Skansen Museum on the island Djurgården in Stockholm who dress in traditional garb to better illustrate life in the historic buildings that populate the island and make up the museum.

Holmwood’s Swedish scenes were often developed from sketches she made of the interpreters at the Skansen Museum on the island Djurgården in Stockholm. The island houses actual historic buildings transported from all over the country. The museum’s gallery guides wear traditional dress and demonstrate antique tools and olden-day skills. Mother and Child is a portrait of a woman taking part in a live diorama in a house representing the area of Darlarna. Holmwood was interested in this scene’s suggestion of heritage, the knowledge and experience passed from one generation to the next, giving formation and grounding to contemporary identity.

Sámi Couple features museum invigilators portraying the indigenous people of the northern Nordic areas in a nomadic tepee setting. Holmwood considers her work in relation to an increasing trend to integrate history into representing everyday life, and cites interactive museum displays and television documentaries as examples of this movement. She describes her intensive processes as an experimental archaeology, discovering the nature of materials by really using them. Despite her ongoing research, Holmwood’s days in her studio are mainly spent painting; extracting pigments is a long process that doesn’t require constant attention. As she often works with organic materials such as milk and eggs, she mixes her paints at the beginning of each day, but never makes notes. Her paintings often incorporate very pure pigments as composite colours can’t be exactly reproduced.

In England Holmwood is a member of a Tudor re-enactment group; at their meetings, held at historical preservation sites around the country, they live an authentic 16th c lifestyle and re-learn the life-skills of the past. “We don’t pretend to be in the olden days,” Holmwood makes clear. We are modern people discovering how things work through doing it. The group collaborates in historical research and shares their knowledge. In the club, which includes ironmongers, leatherworkers, clothes weavers, Holmwood is, of course, an Early Modern artist. Holmwood explains: The 16th-century is technically Early Modern rather than Medieval. It’s the beginnings of contemporary art. The art market and the first stock market emerged in Antwerp, and genre painting such as peasants and landscapes started to develop. The development of artists painting peasants through art history is a reflection of increasing urbanism. Frying Fish was completed during an excursion to Avoncroft in Bromsgrove, and pictures a friend cooking kippers. Reminiscent of Gauguin’s rustic exotica, the ceramic-like painting technique replicates the actual glaze effect of the jar seen on the counter.

I use things made by hand by other people, Holmwood adds, such as paint brushes, reproduction period pottery, wooden bowls, hand blown glass, all mixed in with modern things. I like the idea that I’m partaking in other peoples’ crafts and skills. Holmwood’s historical investigation is carried through in her chosen subjects and aesthetics. Half Swedish, Holmwood is inspired by the 19th-century peasant painters of the Darlarna province, whose folk art is a national symbol of Sweden. Based on an archive photo of the actual last peasant painter, the figures in The Last Peasant Painters Peeling Potatoes (Old Woman Mill) are sat in front of a typical Dalecarlian composition. The image seen on the wall is based on a folk legend of old women who are ground up in a mill and emerge rejuvenated. I painted the woodwork using a technique which these artists used to represent mahogany, Holmwood reveals. It’s paint glazed with a sour milk and pigment mixture and sealed with oil. It gives a psychedelic effect.

Sigrid Holmwood strives to get to the absolute heart of painting: not just as an activity, but as a material substance, entrenched with history, inherited knowledge and innate meaning. Holmwood’s Technicolor canvases seem oddly contemporary, especially considering how they’re made. With anorak enthusiasm, Holmwood trawls centuries-old archives and internet forums and consults conservationists, chemists, and herbalists to revive the lost recipes of paint-making. Her pigments and glazes are concocted entirely from scratch and include all manner of ingredients both common and exotic, from precious stones to ground up bugs. “I use these traditions playfully, and expand upon them,” Holmwood explains. I’m less interested in actual recreations than their modern possibilities. In Hugging A Goat, for example, I mixed fluorescent pigment in egg tempera.