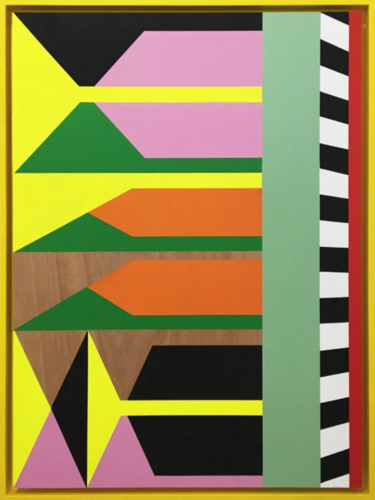 Curated by Jealous Director Dario Illari, the exhibition showcases new and recent works by a diverse line-up of emerging and established artists that have collaborated with Jealous on various projects.

An exclusive new David Shrigley edition will be launched to coincide with the exhibition. Works by Chris Levine will include a large scale unique never-before-seen ‘Lightness of Being’ alongside the recent Kate Moss portrait ‘Stillness Is A Portal To The Divine’ (published by Jealous and Enitharmon).

Admission to the show will be FREE. Walk-ins welcome. / Pre-booking not required.

The full list of artists featured in RIGHT HERE RIGHT NOW is:

Joakim Allgulander is a Swedish artist born in Stockholm, who lives and works in Italy. He has had solo exhibitions in the UK and internationally, as well as featuring in group shows in commercial galleries and public institutions. His work is characterised by a conceptual base, combined with the skill of craft and a love of the practical process.

Danny Augustine is an artist and printer. He completed his MA in Printmaking at the Royal College of Art in 2014 and his work is held in many private and institutional collections, including Soho House internationally. Augustine’s work deals predominantly with ideas of identity and gender and how it is portrayed in today's society, be it male, female, transgender or homosexual.

Charming Baker is a British artist, best known for his oil paintings. His body of work also includes sculptures and prints, often referencing literature and other narratives with a touch of dark humour, exploring the transitory nature of childhood innocence as well as themes such as love, mortality, fear, and joy.

Adam Bridgland lives and works as an artist in Cambridgeshire. A graduate of the Royal College of Art, he uses a diverse range of materials and working methods to pursue an incisive and often witty exploration of distinctively British sentiments.

Dave Buonaguidi lives and works in London. As a screen-print enthusiast, his work experiments with the practice of screen-printing to push the boundaries of what it can be, working on found images and materials to create evocative pieces that connect in an emotive and humorous way.

Anthony Burrill is a British graphic artist, known primarily for his clean typographic works that pack a punch, combining his analogue craft skills and powerful, positive messages, whilst pushing his traditional discipline of choice, letterpress printing, into bold new territories.

Jake & Dinos Chapman are sculptors, printmakers, and installation artists who work together as a duo. Their artwork has been exhibited all across the world and is included in many public and private art collections. The Chapman brothers explore the poles of beauty and pain, humor and horror, the sublime and perverse, the diabolical and the infantile, in ways that shock and confront viewers with their own voyeurism.

Mark Denton Esq. has over 40 years’ experience in Commercial Art, during which time he has become one of the most awarded creatives in the world. He is in big demand for his inspirational talks and has spoken to advertising agencies all over the globe and for clients such as SKY, IPC, Time Inc. Advertising Week Europe and PromaxDDA.

Stanley Donwood is a British artist and writer, who is widely known for his evocative and haunting imagery, creating Radiohead’s distinctive visual identity. He has had solo exhibitions across the world and released an extensive book of his artwork in 2019, published by Thames and Hudson.

Eelus has since painted and exhibited worldwide alongside key figures within the movement. The desirability of his work is evident in the success of his solo exhibitions and sell-out print editions. In early 2021, determined to transform the darkness of the COVID-19 pandemic into a catalyst for positive personal change, Eelus forced himself to re-evaluate and reflect on his art practice, resulting in a radical stylistic change.

Kate Gibb has worked as a printmaker and illustrator for over fifteen years, her early studies in Printed Textiles fuelled her inherent love of colour and pattern, which continually provide the basis for the majority of her work. The kind of printing she is inspired by relies on chance, hiccups and happy accidents.

Chris Levine is a light artist who works across many mediums in pursuit of an expanded state of perception and awareness, through image and form. Levine’s work considers light not just as a core aspect of art, but of human experience more widely and a spiritual, meditative and philosophical edge permeates his work. Levine is perhaps best known for producing what is already being described as one of the most iconic images of the twenty-first century, Lightness of Being; the sensational portrait of Her Majesty Queen Elizabeth II which presents an utterly fresh depiction of the most famous woman in the world.

Ally McIntyre’s work rebels against the constraints the art canon has imposed on painting. She reinvents her subjects through large dimensions, bright colours and an unconventional pairing of mixed media and styles. Bold and assertive, her work stands up to the prevalent association of large-scale art with the male artist. Confident brush strokes envelop glimpses of realism and dissolve faces into playful combinations of dream-like colour, line and glitter.

Jonathan Mannion is one of the USA’s most acclaimed portrait photographers and is a singular sensation within the world of hip-hop. His 25-year career includes over of 300 album covers ranging from Jay-Z to Aaliyah to D.J. Khaled, notable advertising campaigns including Beats by Dre's “Straight Outta _____”, Cadillac, and Bushmills, and editorial work for The Fader, Vibe Magazine and Complex. Jonathan has photographed over 500 of the most important rappers, actors, athletes, artists, designers, and tastemakers of his era.

Upon graduating from the Bachelor of Visual Arts Degree at AUT University in Auckland New Zealand, Liam Mertens moved to London, eventually pursuing an MA in Painting at The Slade School of Fine Art. Throughout his time, Liam has exhibited in both in his home country and various cities across the UK and Europe.

The sibling duo Roberto and Renato Miaz, aka Miaz Brothers, turn portraiture on its head with their large-scale, spray paint-on-canvas paintings, whose subjects are presented completely out-of-focus. As classically trained artists, the brothers honed their approach to portraiture through ten years of experimentation and travel, during which they eschewed the gallery system, presenting their work in unconventional spaces like nightclubs and corporate buildings.

Andrew Millar is a British artist whose main body of work focuses on the portrait. He explores the manipulative potential of Polaroid film for his collages, applying leaf of precious metals and sometimes acrylic colour in the finishing process, all by hand.

Miss Bugs was founded in 2007, in the early days the duo began making small scale works on paper, using screen-printing with hand painted elements, as well as cutting and pasting existing images; ‘remixing and sampling classics’ in art to make new pieces with their own unique mark. Their most recent work includes larger scale artworks, incorporating laser cut planes of wood, hundreds of small component objects and poured resin.

Morag Myerscough’s mantra is ‘make happy those who are near and those who are far will come’. Born and Bred in Holloway, London, Myerscough has always lived in the city and has been fascinated by how colour, pattern and words can change urban environments and people’s perceptions of spaces into places.

Sara Pope is best known for her bold, seductive paintings of voluptuous lips. Taking inspiration from a successful career in the fashion industry as a shoe designer for brands such as Paul Smith, and also her work in magazines as a designer and art director, Pope aims to capture the sensuality and seductive power conveyed by the lips and mouth.

Turner Prize nominated artist David Shrigley is known for his distinctive drawing style and works that make satirical comments on everyday situations and human interactions. While drawing is at the centre of his practice, the artist also works across an extensive range of media including sculpture, large-scale installation, animation, painting, photography and music. He has exhibited extensively both nationally and internationally, notably in 2016 his large-scale sculpture ‘Really Good' was unveiled in Trafalgar Square for the Fourth Plinth Commission.

Primarily a painter, Matt Small has a strong, compelling style, often choosing discarded objects like car bonnets or old signs instead of canvas for his work. The theme of his work is young, dispossessed people, who are without a voice and often looked over and in painting the urban debris on the canvas, he symbolises the feeling of being without value.

Gary Stranger is a UK based artist who started out writing graffiti in 1996. Famed for his well-executed typographic pieces, both his studio work and his wall paintings consist of hand drawn and painted typographic arrangements.

Jess Wilson is an illustrator and printmaker based in London. Using crayons, paints, inks and paper to create her unique illustrations and typographic works, she draws inspiration from humorous occurrences which happen around her, in real life and in the media.

Word To Mother is a London-based graffiti illustrator, tattooist and artist known for creating work that combines many influences into uniquely layered paintings, often atop pieces of salvaged wood.

Dario Illari, Director of Jealous & Curator of RIGHT HERE RIGHT NOW said:
“I’ve been coming to Saatchi Gallery since it first opened its doors on Boundary Road in 1985. It was here that I first got to know many of the artists that I love and admire. So, for Jealous to be showing here feels slightly unreal. But that said, it also feels right.”

Paul Foster, Director of Saatchi Gallery said:
“We at Saatchi Gallery have long admired the breadth & quality of the projects undertaken by Jealous. Sometimes it is hard to keep up with their dynamism – so this exhibition is designed to showcase the artists they work with and to give a wider audience a small taste of what they & Jealous have been up to.”

Free admission to this exhibition for all visitors.

Publicity images can be downloaded via this link. By downloading the images, you acknowledge and accept the terms and conditions found within the link. These images can only be reproduced to illustrate a review or criticism of a work or report as defined by section 30 (i) and (ii) of the Copyright, Designs and Patents Act 1988.

The health and safety of visitors and staff is paramount. Safety measures for visitors can be found on the Saatchi Gallery website: www.saatchigallery.com/visit/covid-19-compliance

Jealous is a contemporary gallery, print publisher and print studio, based in east London’s creative hub of Shoreditch, with Jealous North in Crouch End. Jealous are known for their collaborative approach to producing high quality limited edition prints with many artists, galleries, designers and museums.

Since 1985, Saatchi Gallery has provided an innovative platform for contemporary art. Exhibitions have presented works by largely unseen young artists, or by international artists whose work has been rarely or never exhibited in the UK. This approach has made the Gallery one of the most recognised names in contemporary art. Since moving to its current 70,000 square feet space in the Duke of York’s Headquarters in Chelsea, London, the Gallery has welcomed over 10 million visitors. The Gallery hosts over 5,000 schools visits annually and has over 6 million followers on social media. In 2019 Saatchi Gallery became a charity, beginning a new chapter in its history. www.saatchigallery.com