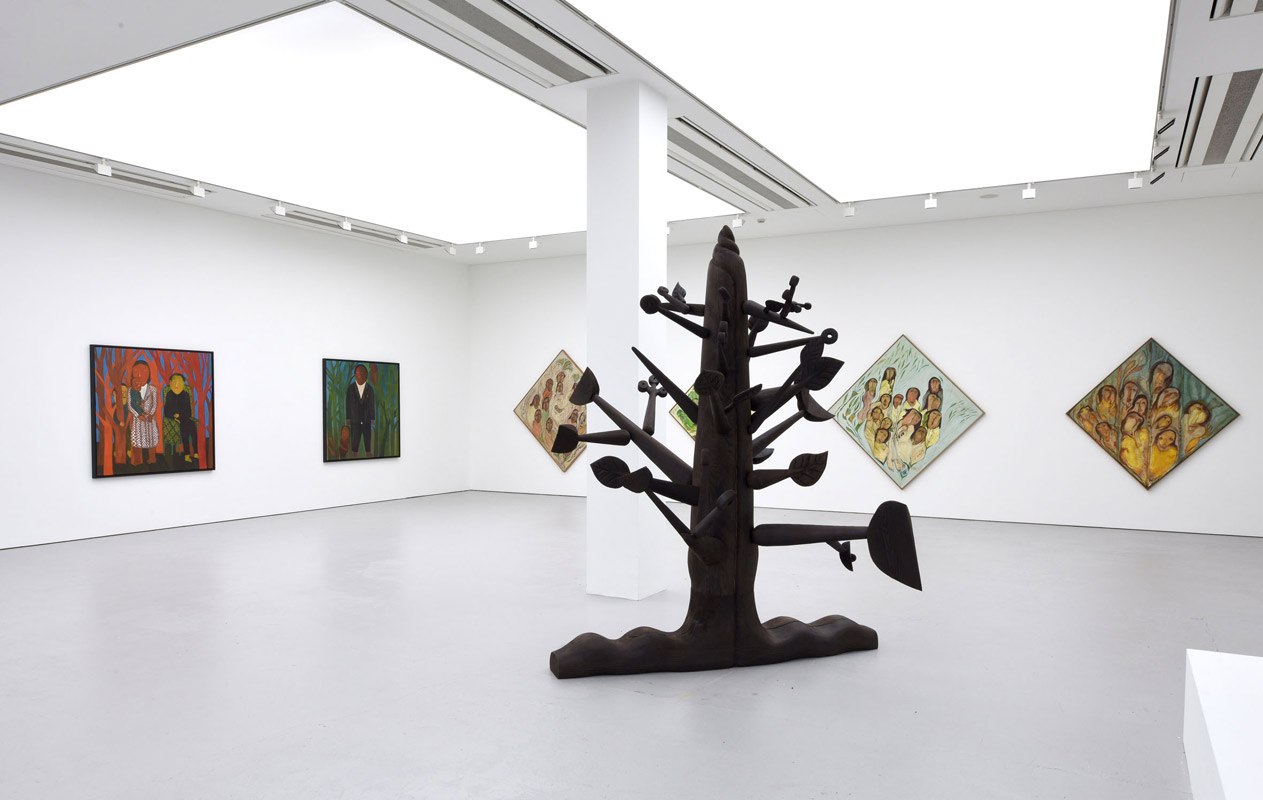 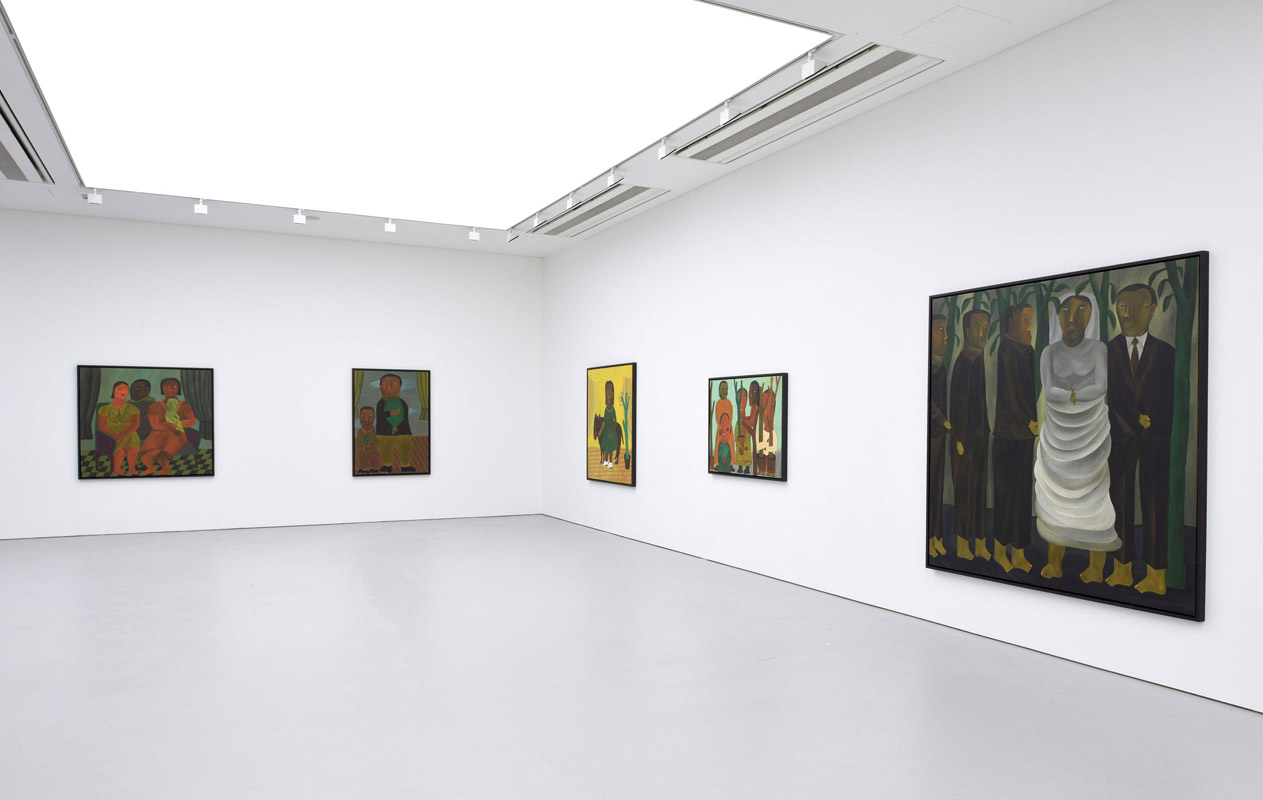 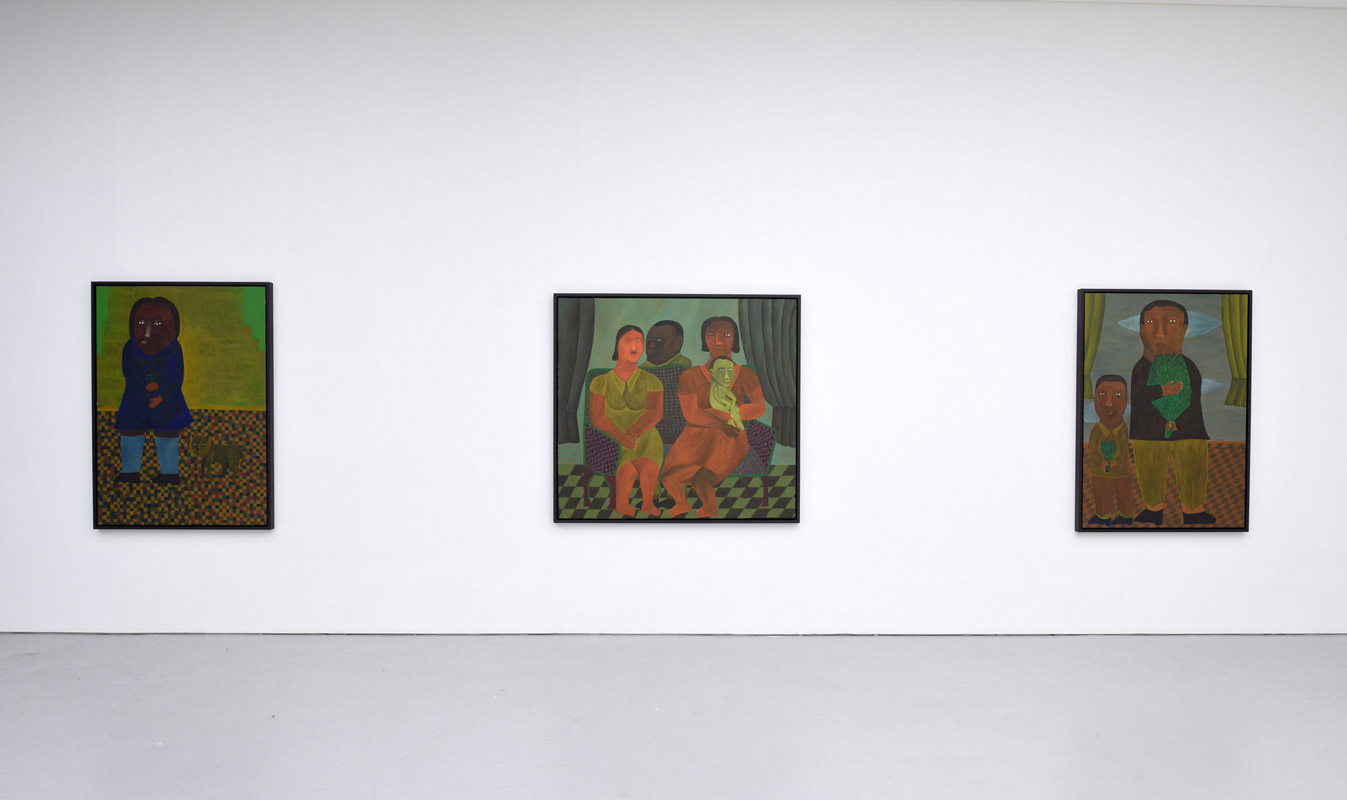 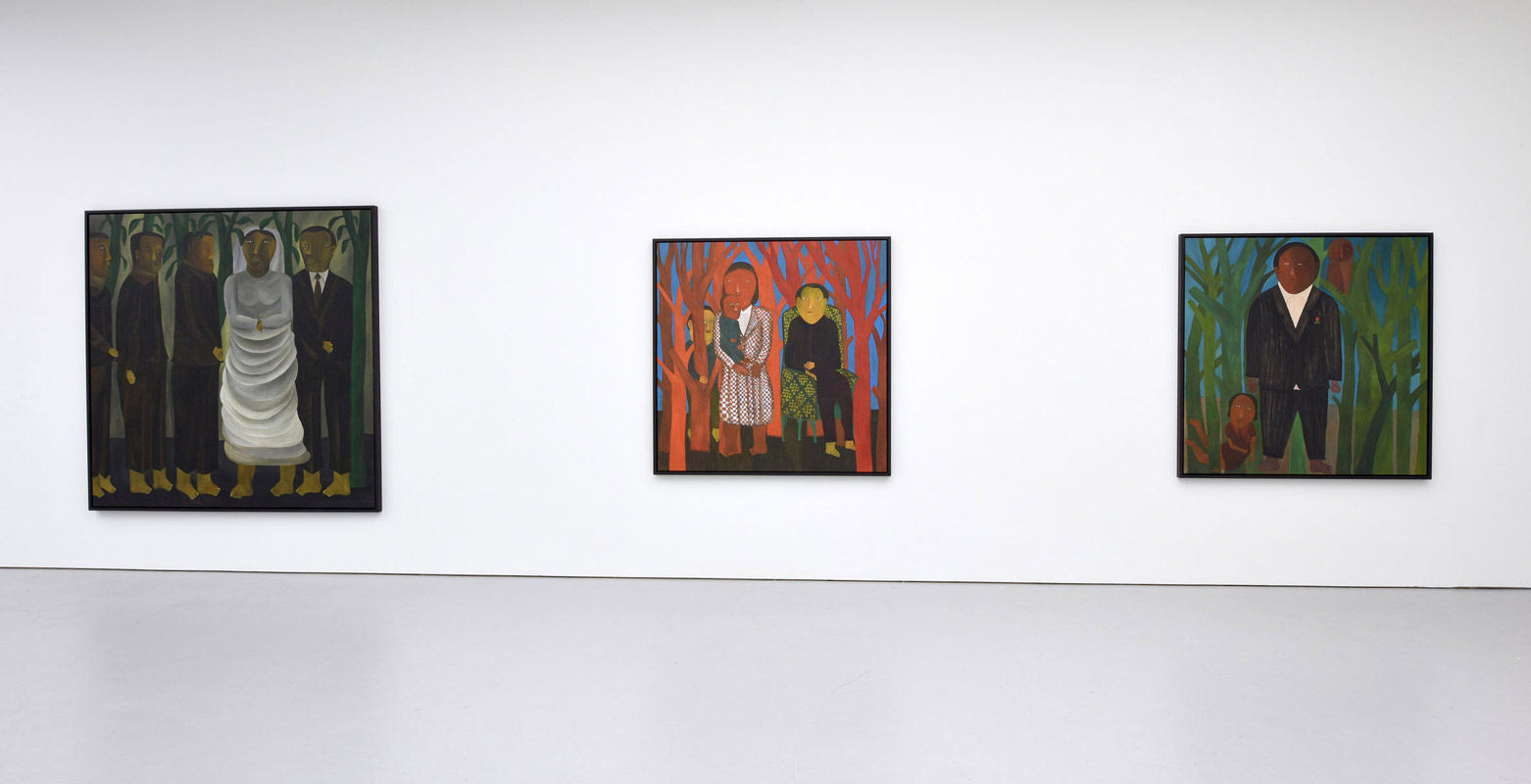 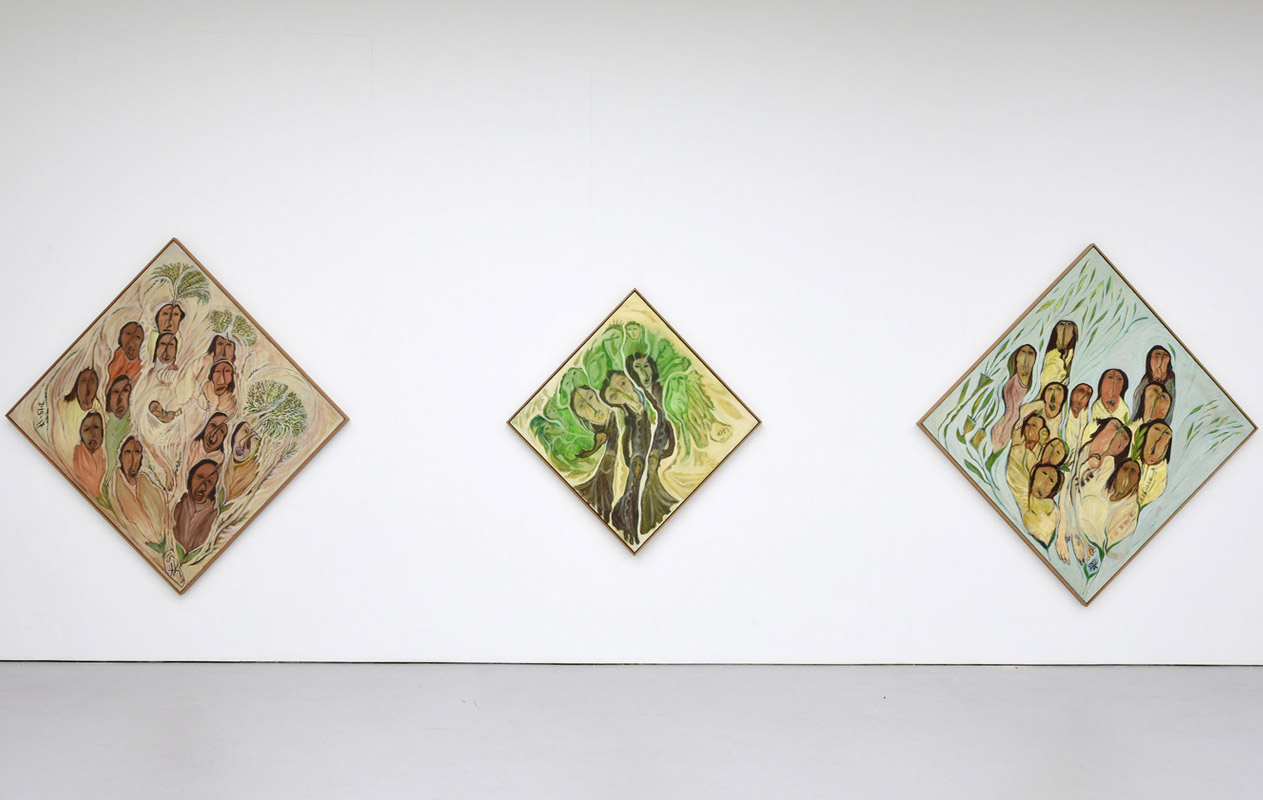 Figurative art from the Khartoum School

SALON, in collaboration with Roubi L'Roubi, is delighted to present Forests and Spirits: Figurative art from the Khartoum School, an exhibition of recent works by Sudanese artists Salah Elmur, Kamala Ishaq and Ibrahim El-Salahi.

Opening on 28 September, the show is comprised of 14 medium and large-scale paintings - 9 by Elmur and 5 by Ishaq - and a single sculpture, Meditation Tree (2018), by El-Salahi*.

Conceived by Roubi L'Roubi, curator of the Foundation Gallery, and Philippa Adams, Saatchi Gallery's Director, Forests and Spirits seeks to bring wider attention to contemporary African art, and in particular the enduring influence of the Khartoum School. Formed in the 1960s, the Khartoum School was an art movement centred around the city's College of Fine and Applied Arts, the institution which has itself been pivotal in the development of contemporary art in Africa. Ishaq and El-Salahi, are among its founders, while Elmur was a pupil in the 1980s when Ishaq, a former graduate, was head of painting.

In this landmark presentation, Ishaq and Elmur's paintings will be displayed around El-Salahi's Meditation Tree. His first sculpture, the work fulfils the artist's long-held ambition to render his drawn images in three dimensions and to play with their scale. The work, part of his 'Tree' series, was inspired by the characteristics of a peculiar type of acacia tree called Haraz. Indigenous to Sudan, the Haraz is of great cultural, spiritual and economical significance - the country's largest export, gum Arabic, is harvested from it - and forms part of the artist's ongoing investigation of the tree/body metaphor, a link between heaven and earth, creator and created.

Trees are a recurring trope in Elmur's work. Many of the paintings featured in this show are drawn from his celebrated 'Forest' series, first seen in his acclaimed 2018 retrospective at the Sharjah Art Museum, UAE. These were inspired by the Sunut Forest, which lies on the junction of the White Nile and Blue Nile at the centre of Khartoum. It is a place where people come to celebrate and picnic. The Bride and Queue of Admirers (2017) captures one such occasion. Four besuited male figures stand around a female in a white dress. Behind them are six green-barked trees. The man on the right, presumably the groom, appears pleased and complaisant, while the others peer enviously at his prize. As with many of his paintings, it exudes intrigue and mystery, asking questions but providing no answers.

Ishaq, meanwhile, has long been preoccupied with the cult of Zar, the term for a demon or spirit assumed to possess individuals, mostly women. The ceremony to drive them away is not an exorcism as perceived by Western sensibilities, it typically includes music and dancing and is effectively an exercise in social restraint, as the 'demon' is often nothing more than an undesirable personality trait such as rudeness or licentiousness.

In Preparation of Incense (2015), Ishaq summons her vision of Zar. Thirteen female figures appear as spirits apparently ascending into the heavens. Various swirling plants convey the sense of movement; these dart left and right like shoals of fish, but also grow from the subjects' mouths, which are agape - possibly wailing, revealing rows of harrowing, broken teeth.

In contrast, Elmur's paintings are models of constraint. His subjects sit or stand motionless like they are presenting themselves to a camera for an official portrait. This echoes his father and grandfather's association with photography. For many years they ran a studio in Khartoum and while it closed before he was born, the artist was fascinated by the portraits that were arranged around his family home.

Elmur's work chronicles the quotidian, capturing the people of Khartoum at play, in domestic settings and at work. His paintings present no discernible narrative. His subjects might hold a plant in their hand, or a musical instrument, an animal or a child, but if they symbolise anything the viewer is left to develop their own thoughts.

Says curator L'Roubi: 'At a time of great interest in African art, it is a special privilege to bring these three unique talents together, and in particular to place the spotlight on Kamala Ishaq, one of three founders of the Khartoum School and a seminal figure in the development of modern and contemporary African art.

'Like El-Salahi, both Ishaq and Elmur draw on older traditions for inspiration - Ishaq with the ceremony of Zar and Elmur, in the works presented here, on the delicate interplay between nature and humanity, the spiritual and the temporal, a line of investigation that unites the practices of all three artists.'

Says Philippa Adams, Director, Saatchi Gallery: 'We are delighted to be showing works by these three distinguished artists of the Khartoum School, in an exhibition that reveals the unique contribution each has made to the development of African art.'

Salah Elmur (b. 1966) is a graduate of the College of Fine and Applied Art, Khartoum. An acclaimed painter, illustrator, photographer and filmmaker, his artworks have been displayed across Africa, the Middle East, Europe and North America. Over the course of his career, he has composed and illustrated more than 35 children's books that have been published in Arabic, French, Italian and Spanish. His skills as an illustrator have won him several international awards including an accolade from the Sharjah Children's Reading Festival. As a filmmaker, Elmur has directed and produced six short films, including documentaries and fantasy films, which have been screened at a number of international festivals. He won the Jury Prize (special acknowledgement) for his film Heaven's Bird at the International Short Film Festival in Ethiopia in 2010. In 2018, he was the subject of major retrospective at the Sharjah Art Museum, UAE. Hiis work is in many private and public collections, including The Museum of African Contemporary Art Al Maaden (MACAAL), The Sharjah Art Museum and the Sharjah Art Foundation (SAF).

Ibrahim El-Salahi (b. 1930) lives and works in Oxford, England. El-Salahi's career spans over five decades and is marked by rigorous experimentation within a Modernist vocabulary. Like other African artists of his generation, he sought to create a national art and aesthetic, born out of the effects of colonialism and steeped in the history and culture of his country. After returning to Sudan in 1957, following his study at the Slade School of Art in London, he developed a painting language that synthesised various hybrid forms. In addition to exploring the symbolic and formal potential of traditional Arabic calligraphy, he incorporated the Africanised arabesque script used by his father for transcribing verses of the Qu'ran, as well as the traditional crafts and ornamentation found in his homeland. El-Salahi's art also reflects his itinerant life, and his many travels outside Sudan. The murals of the Mexican social-realists, the abstract geometric paintings of Piet Mondrian, and the cut-outs of Matisse are some of the influences that shape his work. Although his work has changed stylistically over the decades, it remains consistent in the artist's reliance on line drawing as an overarching structural and emotive device. His insistence on an art form that is socially, politically and spiritually engaged in the world is also a critical component of his work. He is also widely regarded for his numerous critical essays and is the recipient of dozens of honors and fellowships. He has received solo exhibitions of his work at the Tate Modern and ICA in London, Sharjah Art Museum, and numerous galleries around the world. His work is included in the permanent collections of the Museum of Modern Art, New York, Metropolitan Museum, New York, The Art Institute of Chicago, Chicago, The British Museum, London, Tate Modern, London, The Smithsonian Institute, Washington DC, The Guggenheim Museum, Abu Dhabi, The National Gallery, Berlin, and many others. He was the subject of a major exhibition at the Ashmolean Museum, Oxford, A Sudanese Artist in Oxford, in 2018.

About the Khartoum School

The Khartoum School was a Modernist art movement formed in Sudan in the 1960s that sought to develop a new visual vocabulary to reflect the distinctive identity of the newly independent nation. Ahmed Shibrain and Kamala Ishaq were among its As one of the most active contributors to the growth of modern art in Africa, the group was typified by its use of primitive and Islamic imagery. One of its distinctive characteristics was the use of calligraphic writing, in which the artists would simplify Arabic script into abstract shapes. This aesthetic, called hurufiyya, together with Islamic motifs, became a hallmark of the Khartoum School. Ibrahim El-Salahi and Kamala Ishaq were among its founders.

About the Foundation Gallery

The Foundation Gallery, based in London, was founded was founded by Roubi L'Roubi to provide a platform for communication, creative management for artists and the production of supporting exhibitions.

L' Roubi is a London-based creative director with a keen interest in contemporary art, and in particular African art. He is a graduate of Imperial College, London, where he studied mechanical engineering. On graduating, he worked in the fashion manufacturing industry. Recently, he has returned to engineering, and his current work unites these two disciplines, using technology and design, fused with nature, to advance bio-medical innovation.

SALON is a project space at Saatchi Gallery that has been created to present the work of leading international artists who have had limited exposure in the UK. Located in its own self-contained space at the Saatchi Gallery, this venture collaborates with galleries and artists' estates in selling exhibitions, and is directed by Philippa Adams, Senior Director, Saatchi Gallery.