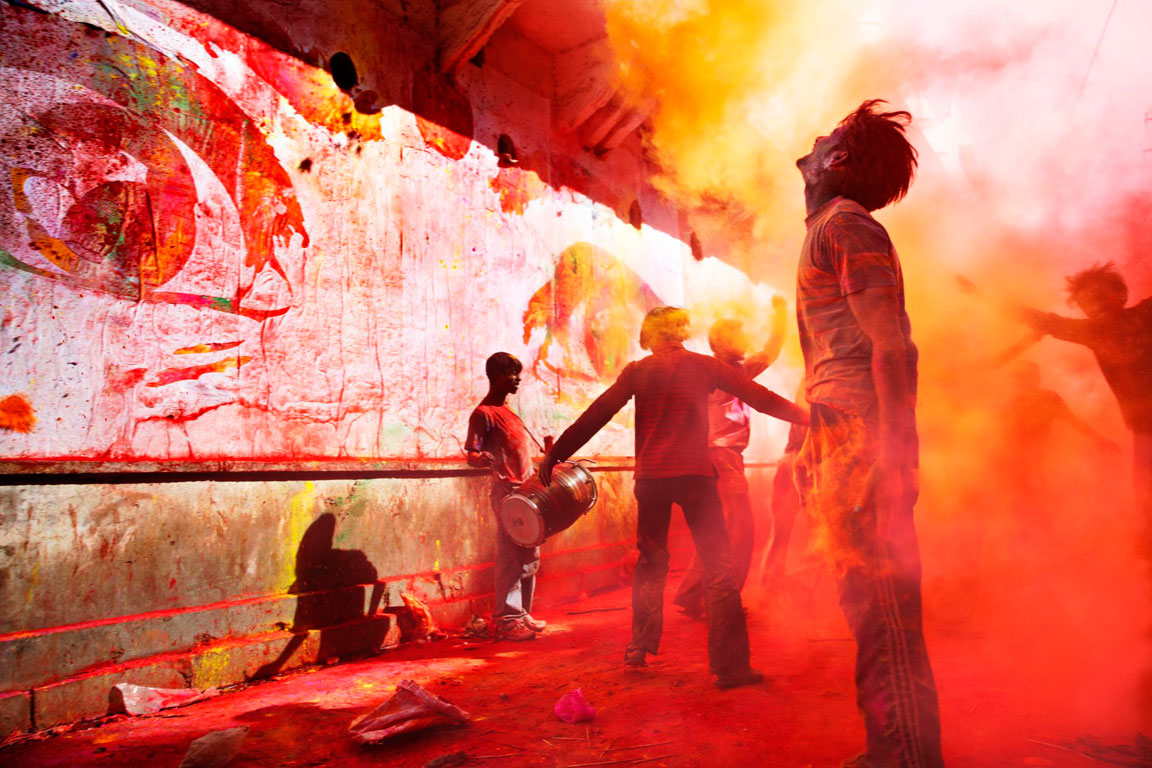 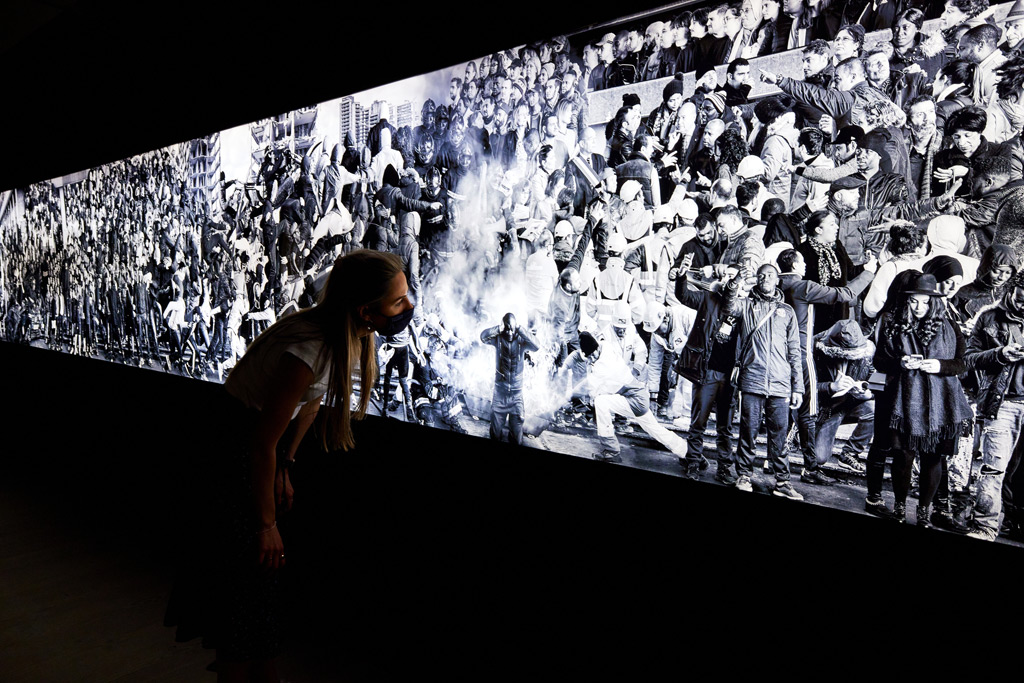 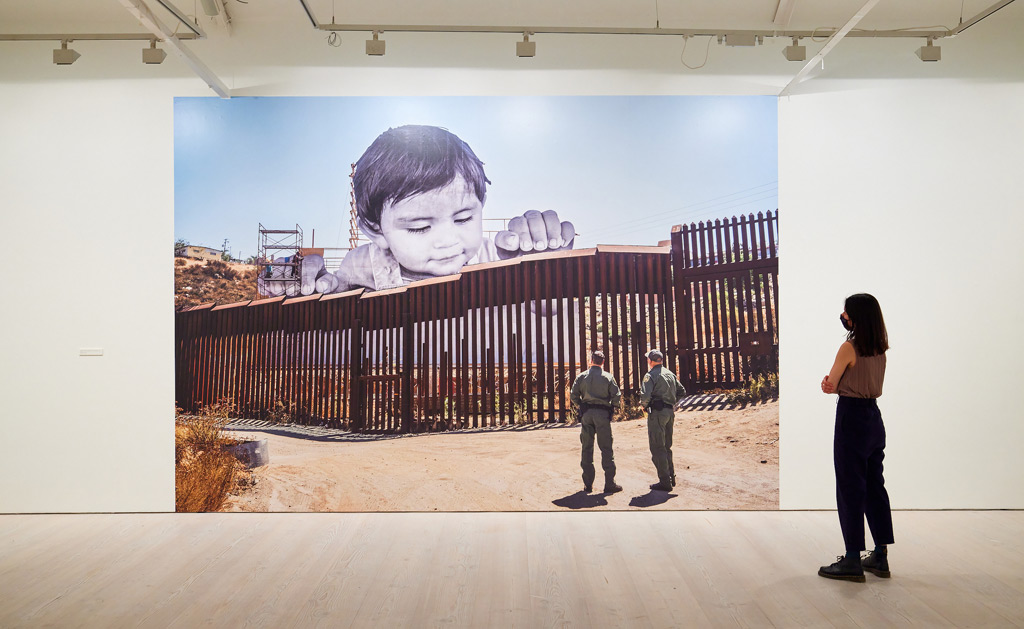 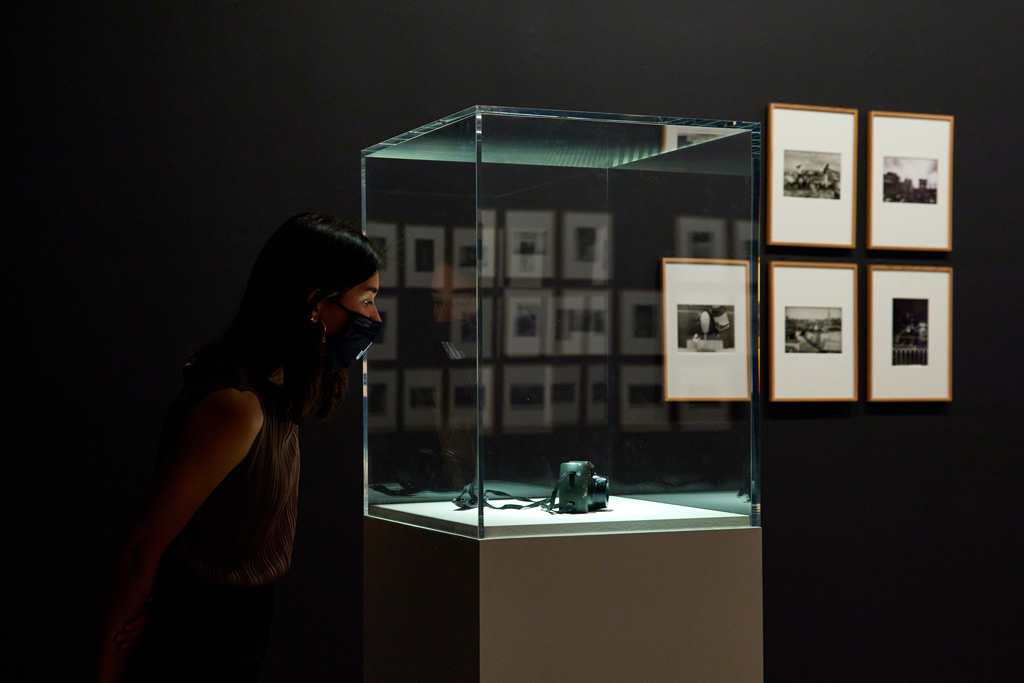 Saatchi Gallery is pleased to present JR: Chronicles - the largest solo museum exhibition to date of the internationally recognised French artist JR, featuring some of his most iconic projects from the past fifteen years. Curated by Sharon Matt Atkins and Drew Sawyer from the Brooklyn Museum, JR: Chronicles traces JR's career from his early documentation of graffiti artists as a teenager in Paris to his large-scale architectural interventions in cities worldwide and recent digitally collaged murals that create collective portraits of diverse communities.

Saatchi Gallery is delighted to showcase JR: Chronicles featuring recent projects, including The Secret of the Great Pyramid (2019), JR's large-scale collaborative piece created in occasion of the 30th anniversary of the Louvre Pyramid, and Tehachapi (2019) which follows JR's experiences with inmates of a maximum-security prison in California.

"JR: Chronicles takes visitors on a global journey through the intimate storytelling of one of today's most influential contemporary artists. The exhibition opens in London during a key moment in time in which social engagement and the power of communities have taken centre-stage in London and around the world.", Laura Uccello, Partnerships Director

JR is a TED Prize winner, Oscar nominated filmmaker, and one of Time's 100 most influential people of 2018. He has received critical acclaim for his global art projects that bring together diverse groups of participants and create dialogue around critical social issues, from women's rights to immigration, to gun control. JR spotlights communities across the world by photographing individual members of those communities and then wheat pasting their images -sometimes illegally- on a monumental scale usually reserved for advertisements featuring models, celebrities, and politicians. These installations are deliberately placed in public spaces near or within the communities with whom JR has partnered, allowing the individuals portrayed to remain at the centre of the discussions prompted by the artist's work.

The first section of the exhibition traces JR's artistic evolution, focusing on his commitment to community, collaboration, and civic discourse. Early photographic projects are featured, including Expo 2 Rue (2001-4), where he documented and pasted photocopies of his community of graffiti artists in action, using the streets as an open gallery. Portrait of a Generation (2004-6) features portraits of young people from Les Bosquets, a housing project in the Parisian suburb of Montfermeil that became a central location for countrywide riots in 2005 amid rising socioeconomic and police tensions. JR and his friend Ladj Ly, a filmmaker and resident of Les Bosquets, worked with the community to capture portraits and then wheat pasted the images both in Montfermeil and throughout Paris. By bringing the faces of young people from the projects to prominence, JR and his collaborators brought attention to the misrepresentation of these individuals in the media, thereby also challenging the public's assumptions and biases. 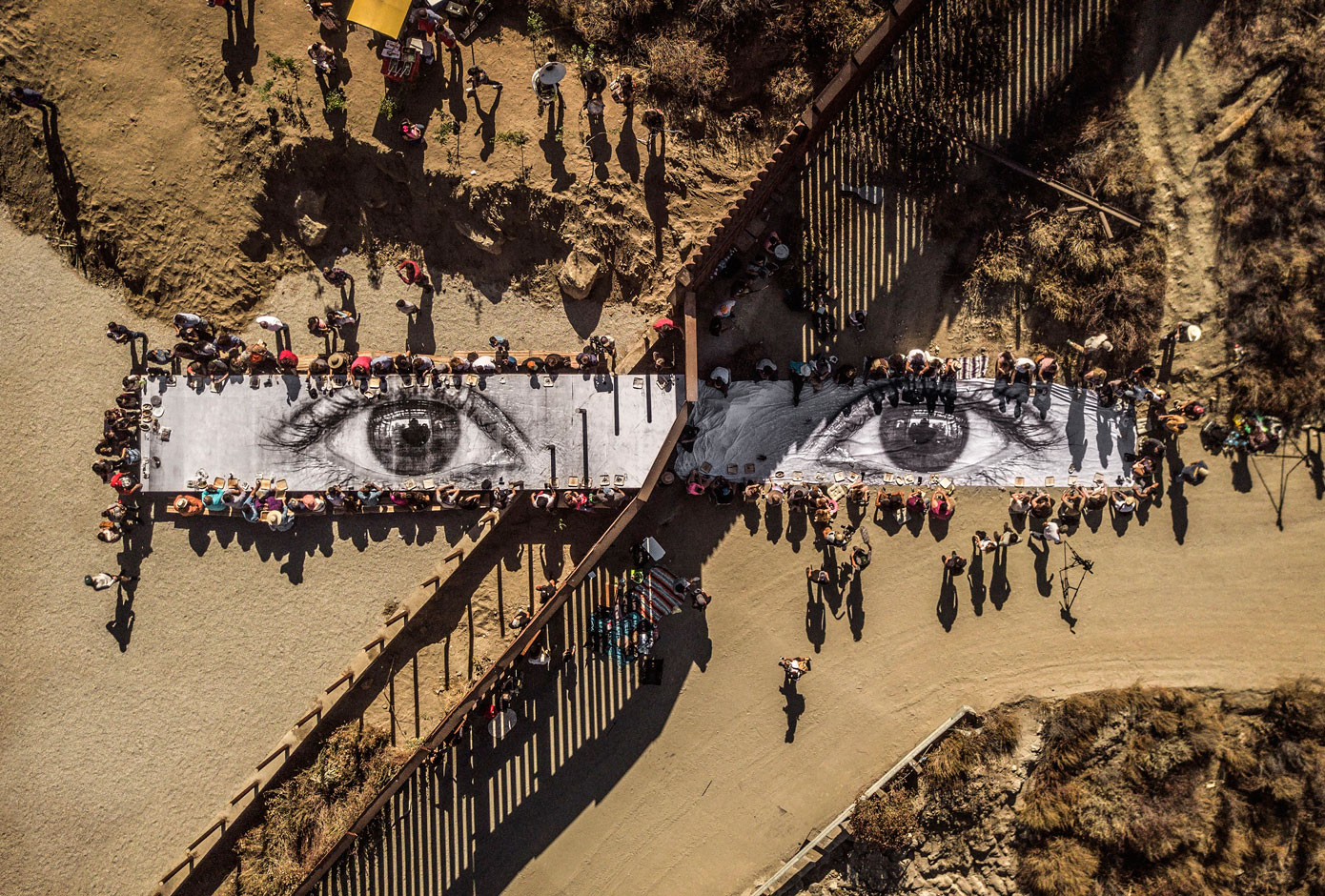 JR expanded his practice and began to travel globally in the mid-2000s. In 2005, he travelled to Israel and Palestine and began a public art project similar to Portrait of a Generation. Face 2 Face (2007) featured giant portrait diptychs of Israelis and Palestinians pasted on either side of the separation wall and in several surrounding towns. The portraits were of pairs of people -one Israeli and one Palestinian- who lived on opposite sides of the wall yet held the same job: teachers, doctors, athletes, artists, and religious leaders; they were displayed side by side, without any signifiers indicating which were Israeli and which were Palestinian. At the time, it was considered the largest illegal photography exhibition ever made in Israel, spanning over eight cities including Bethlehem, Tel Aviv, Ramallah, and Jerusalem. Photographs, videos, and ephemera from the project will be on view.

Other international projects on display include Women Are Heroes (2008-9), which honours the contributions of women to public life by installing large-scale images of their eyes and faces in their own communities, and Inside Out (2011-ongoing), a global participatory art project that enables individuals to take and share their own portraits. The exhibition also features The Wrinkles of the City (2008-15), a multicity project celebrating the oldest members of society and the histories they can tell, installed in cities including Havana and Los Angeles; the film Faces Places (2017), co-directed with French filmmaker Agnès Varda, which follows the two artists as they travel around rural France creating portraits to highlight worker solidarity; and The Gun Chronicles: A Story of America (2018), a video mural that visualises the complex spectrum of views on guns in the United States, including those of gun collectors, hunters, law enforcement officials, shooting victims, emergency room teams that treat victims of mass shootings, and lobbyists for the gun industry.

Through his powerful storytelling abilities, collaboration with and commitment to community, and willingness to question power structures and institutions, JR has re-invented the medium of photography in the twenty-first century. Showcasing photographs, films, and documentation of the artist's installations, this major exhibition demonstrates how and why JR's practice has managed to both capture the imagination of audiences worldwide and expand the meaning of public art through participatory projects that give visibility and agency to a broad spectrum of people.

Born in Paris in 1983 to Eastern European and Tunisian immigrant parents, JR began his career as a graffiti artist. After finding a camera in the Paris Metro in 2001, he began documenting his friends in the act of graffitiing and soon started pasting the photographs on building facades throughout urban centres.

JR was awarded the TED Prize in 2011, which inspired Inside Out: The People's Art Project, an international participatory art project that encourages people worldwide to have their picture taken and pasted in public spaces in an effort to share stories, experiences, and beliefs. In 2013, his film based on Inside Out premiered at the Tribeca Film Festival. The project also inspired JR's installation covering the dome, cupola, and floor of the Pantheon, in Paris in 2014. Inside Out has continued to grow with mobile photo studios operating in the streets of New York, Amsterdam, London and Paris. As of July 2019, over 400,000 people from more than 141 countries had participated.

JR received his first solo museum exhibitions in 2013 at the Watari Museum of Contemporary Art Tokyo, and the Contemporary Arts Center, Cincinnati, followed by presentations at Museum Frieder Burda in Baden-Baden, in 2014 and the Hong Kong Contemporary Art Foundation, in 2015. Commissioned by the Louvre in 2016, a photo-installation created by JR camouflaged the museum's famous I.M. Pei-designed pyramid with a precise scan of the Pavillon Sully, which is located behind it. Also in 2016, the artist worked with the Rio de Janeiro Olympics to cover the streets with large-scale photo- installations of athletes in motion; the Centre Pompidou, Paris, to create an exhibition and workshop to help children discover photography; and the Palais de Tokyo, Paris, where he collaborated with the Brazilian artist duo OSGEMEOS on the Lasco Project, a permanent installation on display in the underground chambers of the museum. In 2018, JR received his first Oscar nomination after partnering with pioneering filmmaker Agnès Varda to create the documentary Faces Places. JR's first major museum exhibition, MOMENTUM. la mécanique de l'épreuve, took place at the Maison Européenne de la Photographie, Paris, in 2018. In February 2019, JR returned to the Louvre for another project, this time to "reveal" the pyramid on the occasion of its 30th anniversary. In May 2019, the San Francisco Museum of Modern Art unveiled The Chronicles of San Francisco, an animated mural, made of a large LED screen, that features more than 1,200 people from around the city. JR participated in the National Gallery of Victoria Triennial held in December 2020, where he completed the multi-part artwork Homily to Country. The installation comprises of an envisaged open-air chapel with a series of large format stained-glass windows depicting natural elements of the Darling River and transposed portraits of members of its surrounding community, in order to draw global attention to both the environmental and human impact of the Australian river system’s ecological decline.

Aware that culture has the power to initiate dialogue, bring people together and make us stronger, French entrepreneur and patron Frédéric Jousset created Art Explora in November 2019, a philanthropic foundation with an international, roving and digital ambition. Renewing the promise of making culture more accessible, Art Explora aims to bridge the cultural divide, notably by broadcasting digital content and engaging in innovative projects available to all and thereby creating new meetings between works and a broad and diverse audience, all the while supporting creation, cultural actors and their initiatives. https://artexplora.org/en/

Saatchi Gallery is committed to playing our part in encouraging the art world to reopen by supporting artists and exhibitions.

The health & safety of visitors and staff remains our priority. Saatchi Gallery will be following government advice on health & safety measures including:
- Social distancing throughout our building
- Operating a one-way navigation throughout our spaces
- Wearing of face coverings by staff and visitors
- Multiple hand sanitisation stations


With Major Support from Art Explora
×