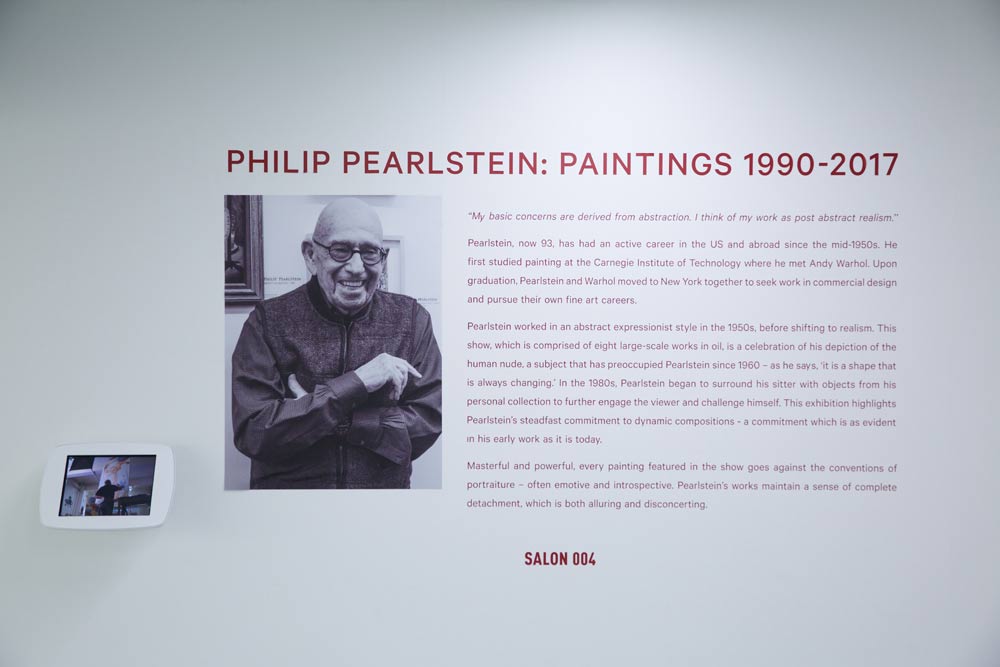 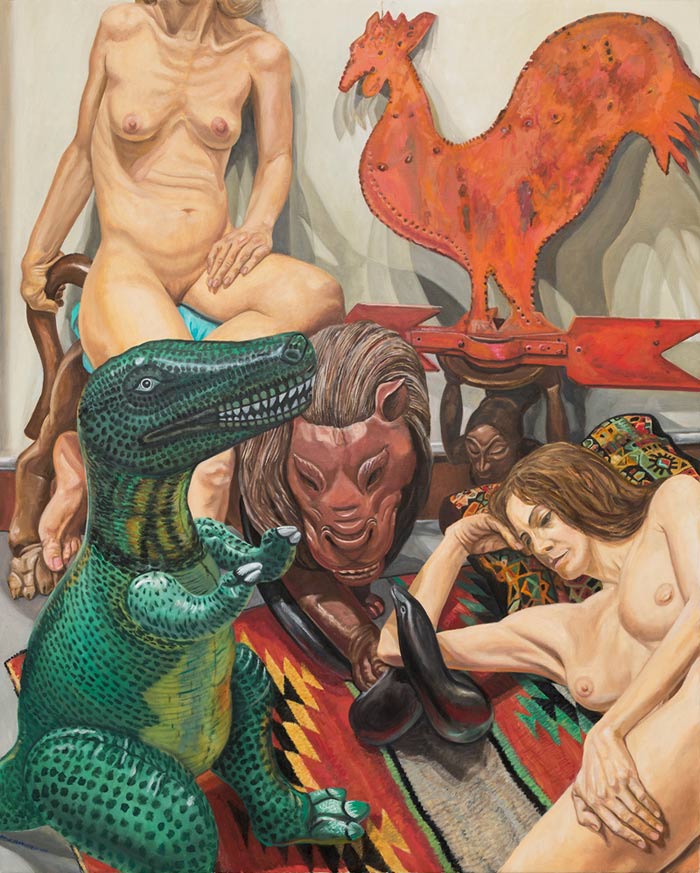 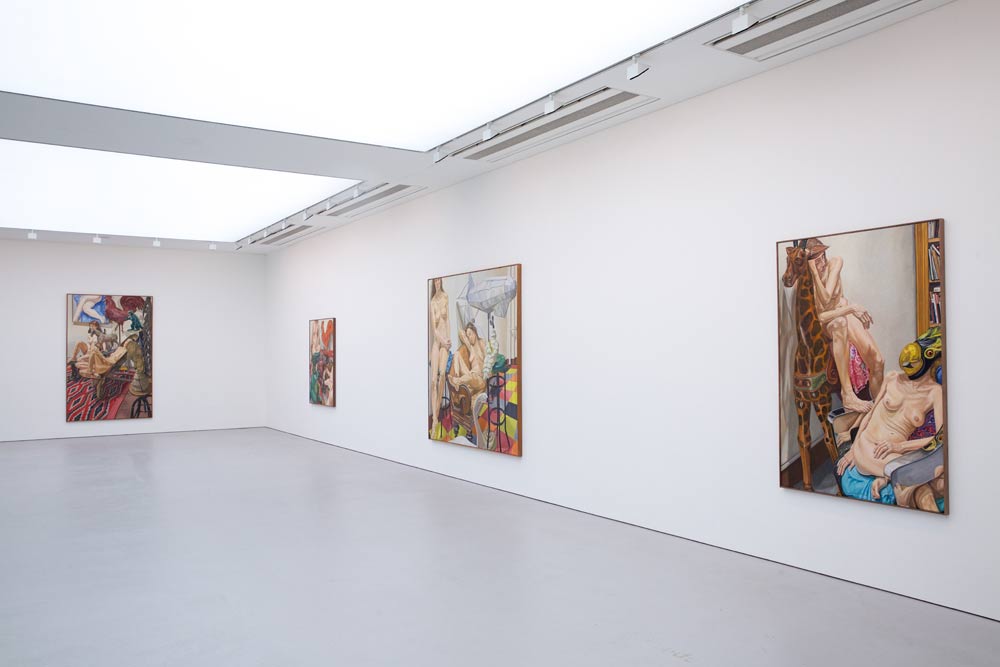 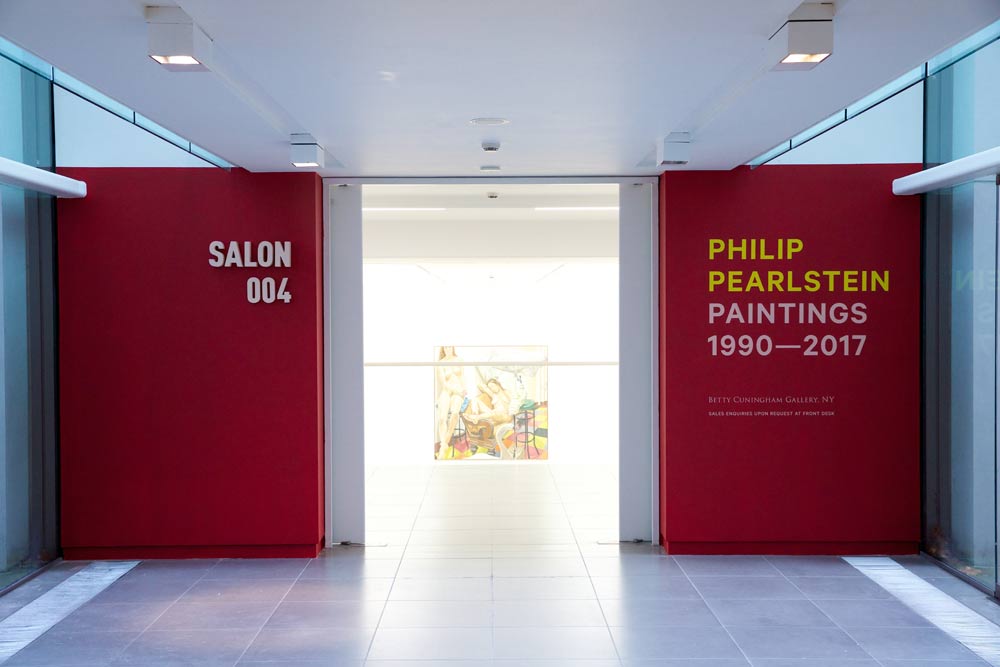 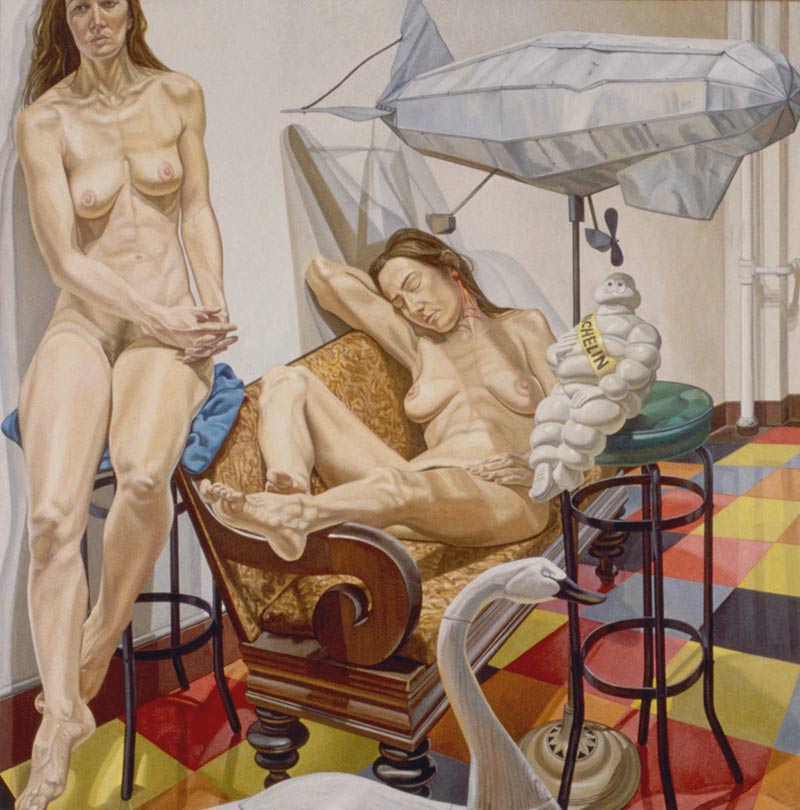 "[By 1960], I decided I didn't want to express other artists' ideas any longer. I wanted to paint what was in front of me." Philip Pearlstein, Studio International, 2016

SALON, in collaboration with Betty Cuningham Gallery, New York, is delighted to announce its fourth exhibition, Paintings 1990 – 2017, a presentation of works by the revered American artist, Philip Pearlstein.

Pearlstein, now 93, has had an active career in the US and abroad since the mid-1950s. He first studied painting at the Carnegie Institute of Technology where he met Andy Warhol. Upon graduation, Warhol and Pearlstein moved to New York together to seek work in commercial design and pursue their own fine art careers. Pearlstein worked in an abstract expressionist style in the 1950s, before shifting to realism. This show, which is comprised of eight large-scale works in oil, is a celebration of his depiction of the human nude, a subject that has preoccupied Pearlstein since 1960 – as he says, 'it is a shape that is always changing.' In the 1980s, Pearlstein began to surround his sitter with objects from his personal collection to further engage the viewer and challenge himself. This exhibition highlights the strategies he employs in creating a complexity in his paintings that continues today.

Models and Blimp (1991), with its Michelin man, decoy swan and antique weathervane, is illustrative of Pearlstein’s mature work. While the props around the two female models intrigue, they are not there to create meaning or narrative. For Pearlstein, painting is abstract, it is just painting: his approach to living, human flesh is the same as to inanimate objects.

In this work, as with others, Pearlstein chooses a point of view that creates the most challenging composition for him to paint, and for the beholder to view. The unsettling effect of the skewed, oblique angles and perspectival compression is further reinforced by the truncation of the head and legs of the model in the foreground.

Masterful and powerful, every painting featured in the show goes against the conventions of portraiture - often emotive and introspective. Pearlstein's works maintain a sense of complete detachment, which is both alluring and disconcerting.

Says Senior Director Saatchi Gallery, Philippa Adams: 'Philip Pearlstein’s approach to the nude is unflinching - as a realist, he paints what he sees. However, the introduction of random objects from his studio brings a sense of ambiguity. Indisputably one of America's greatest artists, SALON is honoured to be working with Pearlstein, and with Betty Cuningham, to bring this exhibition together.'

Philip Pearlstein was born in Pittsburgh, PA in 1924. He received a BFA from Carnegie Institute of Technology in 1949 and an MA from NYU’s Institute of Fine Arts in 1955. That same year he had his first solo show at Tanager Gallery. Among Pearlstein's honours are a National Endowment for the Arts grant, 1968; a Guggenheim Foundation fellowship, 1969; and election to the American Academy and Institute of Arts and Letters, 1982, for which he served as President from 2003 – 2006; and recently the Icon Award in the Arts from the Bruce Museum in Greenwich, CT. Honorary Doctorates received from: Carnegie Mellon University, Pittsburgh, 1983; Brooklyn College, Brooklyn; College of Art & Design, Detroit; New York Academy of Arts, New York; and Lyme Academy College of Fine Arts, Old Lyme. Currently, he lives and works in New York City.

Betty Cuningham has by her own admission reinvented her gallery several times. In 1972, she opened her first gallery on Prince Street in the heart of Soho, just above the well-known bar, Fanelli’s, where she showed John Walker, Ross Bleckner, Ray Parker, David Diao among others. In 1982, Mike Fanelli died and Betty moved uptown to join Hirschl & Adler Modern where she first began working with Philip Pearlstein. This was the beginning of their 36-year business partnership. The pair moved twice: in 1998 to the Robert Miller Gallery and in 2004 to her re-opened Betty Cuningham Gallery. Currently she represents (in addition to Philip Pearlstein) Rackstraw Downes, William Bailey, the Estates of Christopher Wilmarth, Andrew Forge, and Jake Berthot and Bill Traylor from the Charles E. and Eugenia C. Shannon Trust. After 10 years in Chelsea, the gallery relocated to Manhattan’s Lower East Side (only a few blocks away from where she first opened).

SALON, Saatchi Gallery’s new project space has been created to present the work of leading international artists who have had limited exposure in the UK. Located in its own self-contained space at the Saatchi Gallery, this new venture will collaborate with galleries and artists’ estates in selling exhibitions, and is directed by Philippa Adams, Senior Director, Saatchi Gallery.